Nineteen Eighty-Four (often republished as 1984) [1] is a dystopian novel by George Orwell about the excesses of totalitarian regimes and especially of Stalinist communism. The book's working title was The Last Man in Europe, but it was changed at the publisher's suggestion.[2]

Orwell was influenced by the ideas of the American conservative James Burnham's book The Managerial Revolution,[3] which contains many of the same themes. This helped to shape the political situation described in 1984. Orwell also found influence in Jack London's novel The Iron Heel, and Yevgeny Zamyatin's We.

Though Orwell was deeply critical of communism, it is debatable whether 1984 was intended as a condemnation of all forms of socialism. Orwell denied attacking socialism but that may have been essential self-preservation for a writer in the pro-socialism climate in Britain at the time. On the other hand, it is possible that Orwell, being acutely aware of the promotion of liberalism by large corporations in crony capitalist environments, believed that a form of socially conservative limited socialism was the best way to prevent the further erosion of freedom and traditional values. Orwell wrote, in response to critics: "My recent novel [Nineteen Eighty-Four] is NOT intended as an attack on Socialism or on the British Labour Party (of which I am a supporter) but as a show-up of the perversions ... which have already been partly realized in Communism and Fascism. ...The scene of the book is laid in Britain in order to emphasize that the English-speaking races are not innately better than anyone else and that totalitarianism, if not fought against, could triumph anywhere."[4] 1984 has a conservative message, and was influenced by the work of Burnham.

The book is, at its heart, a condemnation of the ultra-liberal menace that arose and threatened Europe during his time. The fictional Oceanic dictatorship is the logical extreme of the liberal attitude towards government Orwell saw creeping in around him, both at home and abroad. The breakdown and perversion of home and family ties, the eradication of religion to make room for secular cult worship, the manipulation of language and history to suit the agenda of the day, and the use of deliberate economic strangulation in order to ensure compliance in the population were all tactics that Orwell predicted would come into play should an ultra-liberal government arise. One need only examine the regimes of Stalin and Kim Jong Il to see examples of Orwell-type dictatorships; atheism and state-worship forcibly substituted for religion, the deliberate starvation of all but the most elite members of society, even Orwell's nightmarish vision of sons spying on their parents for the state came true in the Soviet Union, and still persists in North Korea. Thus he uses the book to attack the intrusiveness and arrogance of big government.

Despite it condemning totalitarian-style governments, however, some leftists often use the book as a means to promote the exact same hard left policies that Orwell himself tried to condemn, even using the book's descriptions to condemn traditional governments as being "authoritarian" while promoting groups and concepts that were far closer in nature of the Oceanic dictatorship in the book. Examples of this include George Lucas, who claimed he was "a 1984 kind of guy" as well as being self-described as anti-authoritarian, yet at the same time had no qualms with supporting the Vietcong and basing the Rebels on them (with full awareness that the Vietcong were a terrorist group in reality)[5] while basing the Empire on America; as well as the Wachowskis, who used symbolism for the book in the Matrix trilogy for the Machines, and in particular Agent Smith, yet had no qualms depicting the heroes as nihilistic terrorists.

In the world of Nineteen Eighty-Four, individual, free nations no longer exist; the world has been divided up into three massive empire-states: Oceania, Eurasia, and Eastasia. Religion is not mentioned in the book and is speculated to have been stamped out. A worship of Big Brother, similar to Juche, is imposed as an alternative.

Oceania is, roughly, the English-speaking world: the United States, Canada, Britain, Australia, and South Africa. It is perpetually at war with either Eurasia or Eastasia, and allied with the other. The book describes a hyper-liberal dystopia where the government, known as the Party, monitors and controls nearly all aspects of every individual's life. Extreme liberal fanaticism and ignorance are promoted by Oceania through relentless propaganda. This is practiced to the point that citizens unthinkingly (or, in Newspeak, use bellyfeel) accept everything said and done by the Party, and hate everything associated with the empire-state which happens to the enemy at the moment. Relationships among people, whether platonic or intimate, are discouraged or sometimes forbidden outright, as they distract from worship of the leader, Big Brother (who may or may not exist). It is later revealed that in reality all three empire-states have the same government and are essentially identical in their pursuit of a liberal, pagan social system.

The protagonist, Winston Smith, works in the Ministry of Truth, a department of the Oceanian government altering records to fit the Party's current version of history. However, Smith gradually grows to disagree with the Party and what it stands for. Julia, a woman who also works in the Ministry of Truth and ostensibly a member of the Junior Anti-Sex League, becomes Winston's lover, and after meeting in several different places, they finally rent an upstairs room in a prole shop. However, the owner of the shop turns out to be an agent of the Thought Police and Winston and Julia are captured by the thought police right in their room, brought to the Ministry of Love, and tortured to the point where they once again love the Party.

Much of the novel is taken up with discussions of the nature of power and societal control, and words and mottoes from the novel – "doublethink", "We have always been at war with Eastasia", "the memory hole" and many more – have become standard shorthand in political discussions, while terms such as "thought police", "Room 101" and "Big Brother" have entered the language.

The environmental background to the action of the story is a satirical portrayal of late-1940s London, a city where war damage was still very evident, and rationing and shortages a way of life. The Ministry of Truth, as described by Orwell in the novel, is based upon the Senate House building of London University, at the time one of the tallest buildings in the capital, and home during the Second World War to the Ministry of Information. 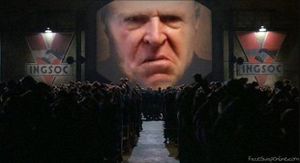 The structure of government in Oceania is sharply pyramidal; the mythical, probably non-existent Big Brother rests forever at the top of the pyramid, followed by the ruling Inner Party consisting of around six million people, or 2% of Oceania's population. Then follows the Outer Party, who serve the Inner Party, making up 15% and lastly the "proles," or the Proletariat, who make up, according to the novel, the remaining 85% of the population. Since Big Brother is probably only a personification of government, it is really the Inner Party which rules Oceania, making it an oligarchy. Goldstein's book refers to the system as "Oligarchical Collectivism." Conservative commentators have noted that the system Orwell describes seems like a parody of the worst aspects of liberalism.

The government is horribly inefficient in all things except constant and oppressive surveillance over Party members. The proles are considered mindless and unimportant, and so are allowed to go free, kept occupied by trashy entertainment known in Newspeak as prolefeed. This is one of Orwell's many swipes at the news and entertainment industry, which was a haven for liberals even in the 1940s. Orwell once remarked that "no event is ever correctly reported in a newspaper,"[7] and he was a known critic of the arts and television, which he considered to be a tool of the elite to spread liberalism and take the world towards a Big Brother-type society.

The entire aparatus of the Oceanic government is divided between four ministries:

Note that all of these names are quite ironic:

1984 has seen numerous adaptations in film and television since it was first published. One being a film released in 1984 starring John Hurt. The same year, a commercial for Apple directed by Ridley Scott, aired during Super Bowl XVIII, was heavily influenced by 1984.