Polaris, also known as Alpha Ursae Minoris, is the brightest star in the constellation Ursa Minor.[2] Polaris is best known for being the current north or pole star, as it is very close to the north celestial pole. Polaris is actually a triple star system, although only Polaris A is visible in the night sky to the unaided eye, with an apparent magnitude of 1.97. The system is approximately 430 light years away.

The traditional name Polaris is one of many known names of the star throughout history. The ancient Greeks called the star Φοινίκη or Phoenice. Another Greek related word was κυνόσουρα or Cynosūra, meaning "the dog's tail", a designation that became popular in reference to the star in 17th and 18th century scientific works. The Bedouin of the Levant referred to the star as الجديّ al-jadiyy, meaning "the billy goat". Arab astronomers however named the star Al Kaukab al Shamāliyy, or "the star of the north". For Hindu mythology, Polaris was known first as Grahadhāra, then as Dhruva (a devotee of Vishnu).[3] 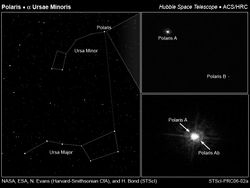 Image showing the location of Polaris in the night sky, and the components of the Polaris system. Taken by Hubble.

Polaris is actually a ternary system of three known stars. Polaris A, which is the north star visible from Earth, is a yellow-white giant or supergiant of spectral class F7 II-Ib. The star is around five times the mass of our Sun with a radius 30 times as great.[4] Because of the enormous size, Polaris is actually some 2200-2500 times as visually luminous as our own Sun, with an average surface temperature of 6600 K. The star's estimated metallicity (abundance of elements heavier then hydrogen and helium), is 112 percent that of our Sun, based on the abundance of iron measured.[5]

Polaris A is also a Cepheid variable star, which pulsates in luminosity with precise regularity. Such stars are used as standard candles for determining distance, especially on an extragalactic scale. As such, Polaris as studied extensively by astronomers. The variation in Polaris is only by 0.03 magnitudes, which occur over a period of 3.97 days.

Polaris B was first discovered by William Herschel in 1780. As an eighth magnitude star, it can be spotted using a small telescope. The star is a yellow-white dwarf of spectral type F3 V. Polaris B orbits its primary with at an average distance of 2400 AU, taking some 42,000 years to complete one orbit. The mass of the star is estimated to be 1.5 times that of our Sun.[6]

In 1929 it was discovered that the Polaris system had a third star, now named Polaris Ab, which is very close to the primary star Polaris A. Polaris Ab is a yellow-white dwarf of spectral class F7 V. The mass is estimated to be around 1.4 times that of the Sun.[4] The star orbits the primary at an average distance of 18.5 AU, or about the distance of Uranus from the Sun. However the orbit is highly eccentric, running between 27 and 6.7 AU.[7]

Polaris as a Pole Star

At present, Polaris is the closest visible star to the north celestial pole, only 0.7 degrees away. As such, the star is almost in a direct line with the Earth's axis of rotation. From an observer on Earth, the star appears virtually motionless as the night goes on, with all the other celestial objects in the northern sky seemingly orbiting it. At present, due to the precession of the equinoxes, the celestial pole is actually moving closer to Polaris, and will reach its closest in the year 2105 before pulling away.[8]