Below are some Richard Dawkins statistics.

In 1984, Dawkins divorced his wife of 17 years, Marian Stamp; later that same year, he married Eve Barham. Dawkins also divorced Barham, though the precise circumstances of this divorce are unclear.[4] He married science fiction actress Lalla Ward in 1992; at present, the two are still married.

According to the website Guinness World Records, a survey by the Bible Society concluded that around 2.5 billion copies [of the Bible] were printed between 1815 and 1975, but more recent estimates put the number at more than 5 billion."[7] The Economist reported in 2007, "...over 100m copies of the Bible are sold or given away every year. Annual Bible sales in America are worth between $425m and $650m; Gideon's International gives away a Bible every second. The Bible is available all or in part in 2,426 languages, covering 95% of the world's population."[8]

In October 2012, Rebecca Watson published a story about Elevatorgate and its aftermath in Slate entitled, It Stands to Reason, Skeptics Can Be Sexist Too: I spoke out about sexual harassment among atheists and scientists. Then came the rape threats.[11]

The web traffic was measured via Quantcast which directly measured Dawkins' website traffic via embedded code on his website.[12]

Debate lost according to student audience[edit]

Rabbi Shmuley Boteach was named the London Times Preacher of the Year 2000 and is the author of 20 books.[19]

A video of the debate that Dawkins lost to Rabbi Shmuley Boteach is available at Rabbi Schely Boteach's website.[21]

Incidentally, Paul Humber notes there was a deception that occurred during email correspondence with Mr. Dawkins concerning the tally of vote counts that occurred for the Oxford debate between creation scientists Professor A.E. Wilder-Smith and Professor Edgar Andrews and evolutionist Richard Dawkins and John Maynard Smith. Mr. Humber did not indicate whether Mr. Dawkins committed the deception or was merely duped by someone who provided an altered account.[22] 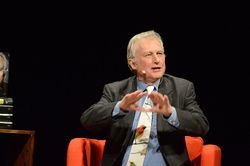 Richard Dawkins has developed a reputation for ducking debates with strong debate opponents.

On May 14, 2011, the British newspaper The Daily Telegraph published a news story entitled Richard Dawkins accused of cowardice for refusing to debate existence of God.[23]

In The Daily Telegraph article Dr. Daniel Came, a member of the Faculty of Philosophy at Oxford University and atheist, was quoted as writing to Richard Dawkins concerning his refusal to debate Dr. William Lane Craig, "The absence of a debate with the foremost apologist for Christian theism is a glaring omission on your CV and is of course apt to be interpreted as cowardice on your part."[24]

In October 2011, Dr. Craig went to England and the Daily Telegraph declared that Dawkins is either a fool or a coward for his refusal to debate William Lane Craig plus declared that Dawkins is a "proud man" and a "coward" who puts on an "illiterate, angry schtick" for the public.[25] In addition, Christian apologist Ken Ammi called Dawkins a "cowardly clown" for his refusal to debate Creation Ministries International at the 2010 Global Atheist Convention.[26]

Dawkins accumulated over 30,000 Twitter tweets.[27] The Independent reported, "Dawkins also admitted he wasn't very good at managing Twitter and the strong reactions his posts tend to provoke. 'Twitter is very difficult medium to handle,' he said. 'I’m not much of a diplomat.'"[28] However, after his stroke, in May 2016, Dawkins gave up posting on Twitter and the tweets that appear in his name are done by his staff.[29]

On November 18, 2014, Richard Dawkins indicated that: he stands by his recent remarks about women/men relations, he feels muzzled by "thought police" and that Rebecca Watson's experience in the elevator was "rather trivial" compared to events some Muslim women experience.[31]

Wikipedia, a website founded by an atheist and agnostic reported as of June 19, 2016:

Richard Dawkins has yet to win a Nobel Prize.