Rufus King (1755-1827) was a statesman, orator, diplomat, and delegate from Massachusetts to the Constitutional Convention. At age 32, he was one of the youngest to sign the U.S. Constitution.

During the Revolutionary War, King had served as an aide to General Sullivan. Later he was the U.S. Minister to England, and he also served in Congress as a Senator from New York.

In United States presidential election, 1816, he ran as a candidate for the Presidency, but lost to James Madison. 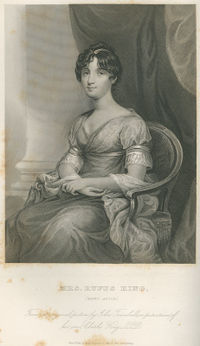 He was born in 1755, at Scarborough, Maine, where his father was a wealthy merchant. Young King was entered at Harvard College, in 1773; but, in 1775, his collegiate pursuits were interrupted by the commencement of the Revolutionary war, the buildings appertaining to the institution having become the barracks of the American troops. The students were, in consequence, dispersed until the autumn of the same year, when they reassembled at Concord, where they remained until the evacuation of Boston by the British forces, in 1776. In 1777 he received his degree, and immediately afterward entered as a student of law, into the office of the celebrated Theophilus Parsons, at Newburyport.[1]

Before he was admitted to the bar in 1778, Mr. King volunteered his services in the enterprise conducted by General Sullivan and Count d'Estaing against the British in Rhode Island, and acted in the capacity of aid-de-camp to the former. In 1780 he began the practice of his profession, and soon after was elected representative of the town of Newburyport, in the legislature or General Court, as it is called, of Massachusetts, where his success paved the way to a seat in the old Congress in 1784. His most celebrated effort in the legislature was made in that year, on the occasion of the recommendation by Congress to the several States to grant to the general government a five per cent impost, a compliance with which he advocated with great power and zeal. Another effort that he is believed to have taken a part in was The Northwest Ordinance.[2][3] He was re-elected a member of Congress in 1785 and 1786.

In the latter year, he was sent by Congress, with Mr. Monroe, to the legislature of Pennsylvania, to remonstrate against one of its proceedings. A day was appointed for them to address the legislature, on which Mr. King rose first to speak; but, before he could open his lips, he lost the command of his faculties, and, in his confusion, barely retained presence of mind enough to request Mr. Monroe to take his place. Meanwhile, he recovered his self-possession, and on rising again, after complimenting his audience by attributing his misfortune to the effect produced upon him by so august an assemblage, proceeded to deliver an elegant and masterly speech. From his time in Congress until his death King was an outspoken friend to the abolition of slavery.[5][6]

In 1787, when the general convention met at Philadelphia for the purpose of forming a constitution for the country, Mr. King was sent to it by the legislature of Massachusetts, and, when the convention of that State was called, in order to discuss the system of government proposed, was likewise chosen a member of it by the inhabitants of Newburyport. In both assemblies, he was in favour of the present constitution. Other members of the Massachusetts delegation to the Convention were Elbridge Gerry, Nathaniel Gorham, and Caleb Strong.

In 1789, he was elected a member of the New York legislature, and, during its extra session, in the summer of that year, General Schuyler and himself were chosen the first senators from the State, under the constitution of the United States. In 1794, the British treaty was made public, and, a public meeting of the citizens of New York having been called respecting it, Mr. King and General Hamilton attended to explain and defend it; but the people were in such a ferment, that they were not allowed to speak.

They therefore retired, and immediately commenced the publication of a series of essays upon the subject, under the signature of Camillus, the first ten of which, relating to the permanent articles of the treaty, were written by General Hamilton, and the remainder, relative to the commercial and maritime articles, by Mr. King. The most celebrated speech made by Mr. King, in the Senate of the United States, was in this year, concerning a petition which had been presented by some of the citizens of Pennsylvania against the right of Albert Gallatin to take a seat in the Senate, to which he had been chosen by that State, on the ground of want of legal qualification, in consequence of not having been a citizen of the United States for the requisite number of years. Mr. King spoke in support of the petition, and in answer to a speech of Aaron Burr in favour of Mr. Gallatin. Mr. Gallatin was excluded.

In the spring of 1796 Mr. King was appointed by President Washington, at the urging of Alexander Hamilton,[7] minister plenipotentiary to the court of St. James, having previously declined the offer of the department of state. The functions of that post he continued to discharge until 1803, when he returned home. In 1813, he was a third time sent to the senate by the legislature of New York, at a period when the nation was involved in hostilities with Great Britain. His speech on the burning of Washington by the enemy, was one of his most eloquent displays, and teemed with sentiments which had echoes from all parties.

In the 1812 election, some Federalists were not supportive of the views of DeWitt Clinton, and sought to nominate King. Nationally, King received less than 6000 votes. His vice presidential candidate was William Richardson Davie.

In 1816, while engaged with his senatorial duties at Washington, he was proposed as a candidate for the chief magistracy of the State of New York, by a convention of delegates from several of its counties. The nomination was made without his knowledge, and it was with great reluctance that he acceded to it, at the earnest solicitation of his friends. He was not, however, elected. In 1820, he was re-elected to the Senate of the United States, where he continued until the expiration of the term, in March, 1825. Several of the laws which he proposed and carried, in that interval, were of great consequence. In the famous Missouri question, he took the lead. On his withdrawal from the Senate, he accepted from President Adams the appointment of minister plenipotentiary at the court of London. During the voyage to England, his health was sensibly impaired. He remained abroad a twelvemonth, but his illness impeded the performance of his official duties, and proved fatal soon after his return home.

He died like a Christian philosopher, April 29, 1827, in the seventy-third year of his age.

His house in Queens County New York, known as King Manor or Rufus King Park, was added to the National Register of Historic Places in 1974.[8]

In Congress when Missouri petitioned for statehood, King declared:

I hold that all laws and compacts imposing any such condition upon any human being are absolutely void, because contrary to the law of nature, which is the law of God.[9]