Thomas Mifflin (January 10, 1744 – January 20, 1800) was the first Governor of Pennsylvania. A member of the Continental Congress, he also served as the fifth president of that body. Mifflin attended the 1787 Constitutional Convention and signed the United States Constitution.

Thomas was born on January 10, 1744 in Philadelphia, Pennsylvania, to John and Elizabeth Bagnall Mifflin.[1] He graduated from the University of Pennsylvania at Philadelphia in 1760, and embarked on a career as a merchant.

Following the second Battle of Lexington, Mifflin focused on recruiting and training troops for the Continental Army. His passion and patriotism, coupled with his great natural ability, led to rapid advancement. On June 23, 1775, Mifflin was appointed as General George Washington's aide-de-camp; later that same year, on August 14, he was appointed the Continental Army's first Quartermaster General. He served in this position for the remainder of the war, but refused to lead from the rear; he was present at the battles of Trenton, Princeton and assisted in the defense of Philadelphia. Mifflin finally resigned his commission and post on August 17, 1778.[2] 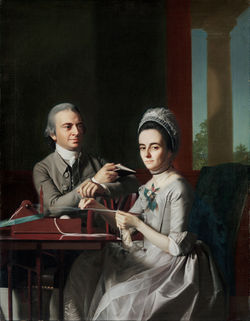 On March 4, 1767, he married Sarah Morris. Sarah was an amazing woman, and like so many others in her time, she did not want to be a slave to the British crown.[3]

Mifflin served twice in the Continental Congress. He was first appointed in 1774, and served through 1175, leaving to fight in the Revolutionary War. He again served from 1782-1784, and was the President of the Continental Congress in 1783. During his tenure as President, he presided over the ratification of the Treaty of Paris, officially ending the Revolutionary War.[4]

Mifflin attended the Constitutional Convention in Philadelphia, where he called for a balance between state and federal powers, and was one of the signers of the United States Constitution.[5] Other members of the Pennsylvania delegation to the Convention were George Clymer, Thomas Fitzsimons, Benjamin Franklin, Jared Ingersoll, Gouverneur Morris, Robert Morris, and James Wilson.

Following his time in Congress, Mifflin returned to politics in his home state of Pennsylvania. He held numerous positions, ultimately serving as the first Governor of Pennsylvania—a position he held from 1790-1799.

Thomas Mifflin died in Lancaster, Pennsylvania, on January 20, 1800; he was buried in the front yard of Trinity Lutheran Church.

Mifflin had a profound impact upon the state of Pennsylvania, and for that reason, a multitude of townships, counties, schools, and more are named after him. They include:

Additionally, Mifflin Township in Franklin County, Ohio, is also named after him. The Thomas Mifflin School in Philadelphia was added to the National Register of Historic Places in 1988.[6]