Oliver Ellsworth (April 29, 1745 - November 26, 1807) was an 18th century Connecticut lawyer, Founding Father, and the second chief justice of the U.S. Supreme Court.[1] He served in the Continental Congress (1777–83) and was a major figure at the Constitutional Convention in 1787.[2] Ellsworth was the author of the Judiciary Act (1789), which shaped the Supreme Court and established the federal judiciary, and the Connecticut Compromise (1789). The Connecticut Compromise has remained virtually unchanged for over two centuries, which pays tribute to Ellsworth's remarkable work.[3]

Oliver Ellsworth was the son of David and Jemimah Ellsworth, born at Windsor, Connecticut on the 29th day of April in the year 1745.[4]

His parents sent him to study with the well known Reverend Dr. Joseph Bellamy of Bethlehem, a friend of Jonathan Edwards, famous as a preacher throughout New England, and known by his writings even in England and Scotland. Dr. Bellamy prepared the boy for college and in 1762, at the age of seventeen, Ellsworth entered Yale.[5]

He stayed at Yale for two years. Shortly after, he attended Princeton, and graduated in 1766.[6] During his time at Princeton, Ellsworth helped found the American Whig-Cliosophic Society.[7]

In 1771, he was admitted to the bar. Before being called to the bar to practice law, Ellsworth focused on paying down his debts by selling wood off of the land he owned on the Connecticut River.[6]

Soon after being called to the Bar, Mr. Ellsworth was married to Abigail, daughter of Mr. William Wolcott, of East Windsor. He accepted from his father the use of a small farm, situated in the northwest part of Windsor, parish of Waterbury, and here he commenced his professional career, relying almost wholly upon his agricultural labors for support. When the court was in session at Hartford, he walked back and forth, a distance of ten miles. He declared "that three pounds, Connecticut money, per annum, was the extent of his professional receipts for the first three years after being called to the Bar."[6]

He was finally employed in a suit of some importance, and gained his case. His prospects brightened, clients gradually increased, he abandoned his little farm and moved to Hartford. He was soon appointed Attorney-General of the State, and held the office for several years.

He was a member of the Legislature which assembled a few days after the battle of Lexington, and in 1777 was chosen Delegate to the Continental Congress. From 1780 to 1784 was a member of the Council of Connecticut, and then was appointed Judge of the Superior Court.

Ellsworth was a member of the convention which framed the Constitution of the United States together with other Connecticut delegates William Samuel Johnson and Roger Sherman. While at the Convention, he served on the Committee of Detail which worked on the first draft of the Constitution.[8]

He also served as Senator in Congress from 1789 to 1796, when he was appointed by Washington Chief-Justice of the Supreme Court of the United States. During his connection with the Senate, he urged that it was not expedient to attempt to fund the public debt at interest higher than four per cent. He also disagreed with the Secretary's proposal to leave one third of the debt unfunded for ten years. 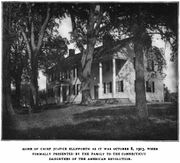 President George Washington appointed him Chief Justice (1796–1800) of the U.S. Supreme Court and in 1799, while serving, he traveled to Paris at the beginning of the Quasi-War to take part in the Convention of 1800, a negotiatiation to prevent full-scale war with France. The treaty was signed on September 30th, 1800.

John Adams described Ellsworth as "the firmest pillar" of the federal government during its earliest years.[9]