Atheism and the no true Scotsman fallacy

A common and legitimate criticism of the atheist worldview is that atheism is irrational.[1]

The no true Scotsman fallacy is a logical fallacy and more specifically a special case of circular logic. It involves dismissing any counterexamples.[2][3]

The Internet Encyclopedia of Philosophy describes the no true Scotsman fallacy thusly:

The no true Scotsman Fallacy was coined by the English philosopher Anthony Flew in his book Thinking about Thinking - or do I sincerely want to be right?. At the time Flew wrote the book he was an atheist, but he later became a theist.

Below are examples of atheists using the no true Scottsman fallacy.

John W. Loftus is one of the more prominent atheist in the atheist community. The ex-atheist Darrin Rasberry formerly wrote for the atheist John Loftus’ blog site Debunking Christianity.[6] After Rasberry became a Christian Loftus said that Rasberry “was never an atheist in the first place.”[7]

The popular Christian YouTube video creator Shockofgod is an ex-atheist who left atheism because it lacks proof and evidence that it is true, while Christianity offers an abundant amount of evidential support.[8] His YouTube videos have cumulatively received over 25 million views since his YouTube channel's inception.[9] Shockofgod won over 70 Christianity vs. atheism debates.[10] There are atheists who claim that Shockofgod was never an atheist.[11]

Atheist apologists commonly try to minimize or deny the role of atheism/atheists as far as atheist atrocites.[12] It is as if no true atheist could be involved mass murder (see also: Atheism and mass murder).[13]

Karl Marx said "[Religion] is the opium of the people". Marx also stated: "Communism begins from the outset (Owen) with atheism; but atheism is at first far from being communism; indeed, that atheism is still mostly an abstraction."[14]

Vladimir Lenin similarly wrote regarding atheism and communism: "A Marxist must be a materialist, i. e., an enemy of religion, but a dialectical materialist, i. e., one who treats the struggle against religion not in an abstract way, not on the basis of remote, purely theoretical, never varying preaching, but in a concrete way, on the basis of the class struggle which is going on in practice and is educating the masses more and better than anything else could."[15]

In 1955, Chinese communist leader Chou En-lai declared, "We Communists are atheists".[16] In 2015, the Communist Party of China reaffirmed that members of their party must be atheists.[17] Dinesh D'Souza took new atheist Richard Dawkins to task for engaging in historical revisionism when it comes to the atrocities of atheist regimes and declared Dawkins "reveals a complete ignorance of history". See: Atheists Dodge Their History of Atrocities

The new atheist Daniel Dennett attempted to minimize the atheism of the militant atheist Joseph Stalin. Dennett said, “ …it occurred to me—let’s think about Stalin for a moment. Was he an atheist? You might say well of course he was an atheist. No, on the contrary. In a certain sense, he wasn’t an atheist at all. He believed in god. Not only that, he believe in a god whose will determined what right and wrong was. And he was sure of the existence of this god, and the god’s name was Stalin.”[21]

Evolutionists who are atheists committing the no true Scottsman fallacy

See also: Christianity and science and Atheism and the suppression of science and Creation science

Evolutionists who are atheists often claim that there are no real scientists who disbelieve evolution.[22] In 2007, "Discovery Institute's Center for Science and Culture...announced that over 700 scientists from around the world have now signed a statement expressing their skepticism about the contemporary theory of Darwinian evolution."[23]

Since World War II a majority of the most prominent and vocal defenders of the evolutionary position which employs methodological naturalism have been atheists and agnostics (see also: Causes of evolutionary belief)[24]

Atheists, age of the earth and the no true Scotsman fallacy

Adolf Hitler was an evolutionary racist.[26]

The Tekton Education and Apologetics Ministry says about the no true Scottsman fallacy (NTS fallacy):

Joseph Goebbels wrote in 1941 that Hitler "hates Christianity, because it has crippled all that is noble in humanity."[29] 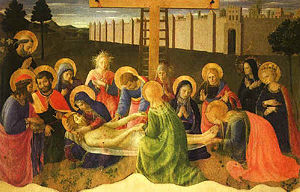 Jesus Christ and his apostles taught a gospel of love.[30]

Jesus Christ was a creationist who believed men were created in the image of God, while Adolf Hitler was an evolutionary racist.[32][33][34]

Adolf Hitler admired the work of the atheist Friedrich Nietzsche

Friedrich Nietzsche wrote: "But now God is dead. You superior men, this God was your greatest danger. Only since he is in the grave, have you risen again. Only now comes the great noontide; only now the superior man will be – Lord!"[35]

The atheist Friedrich Nietzsche wrote: "But now God is dead. You superior men, this God was your greatest danger. Only since he is in the grave, have you risen again. Only now comes the great noontide; only now the superior man will be – Lord!"[36]

The Princeton University Press said about Adolf Hitler and the atheist Friedrich Nietzsche:

Benito Mussolini, Joseph Stalin, Mao Zedong and Pol Pot, who were mentioned above the Princeton University Press, were all atheists. The Muslim dictator Saddam Hussein greatly admired Joseph Stalin (Stalin was one of his heroes) and borrowed many of his ideas.[38][39] Jesus Christ often quoted Scripture and when He was tempted in the desert by the devil, he rebuffed the devil using Scripture (Matthew 4:1-11).

On the other hand, Adolf Hitler tried to marginalize Scripture via his "The Nazi Bible"/"Hitler's Bible". Evolutionist and new atheist Richard Dawkins said in an interview: “What’s to prevent us from saying Hitler wasn’t right? I mean, that is a genuinely difficult question." [41]

When asked in an interview, "If we do not acknowledge some sort of external [standard], what is to prevent us from saying that the Muslim [extremists] aren’t right?", Richard Dawkins replied, "What’s to prevent us from saying Hitler wasn’t right? I mean, that is a genuinely difficult question. But whatever [defines morality], it’s not the Bible. If it was, we’d be stoning people for breaking the Sabbath."[41]

Defending the Bible website on the no true Scotsman fallacy

The website Defending the Bible offers these examples of atheists/evolutionists using the no true Scotsman fallacy: