As you can see above, Google now officially recognizes Conservapedia Obsessive Compulsive Disorder (COCD) as a mental disorder. 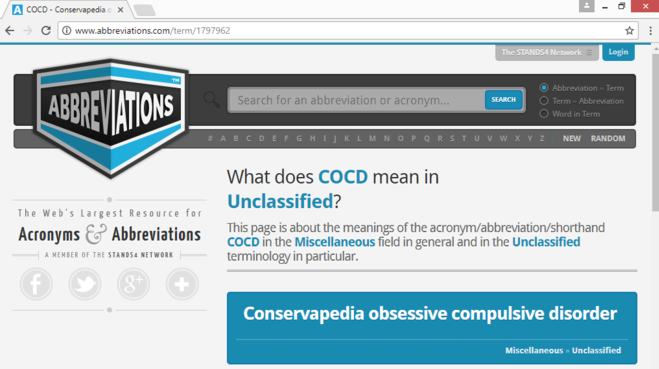 Conservapedia Obsessive Compulsive Disorder (COCD) is a psychological malady which can afflict liberals/leftists and it involves having intense, compulsive and obsessive thoughts about Conservapedia.

Question: Will the Diagnostic and Statistical Manual of Mental Disorders, 5th edition (DSM-5) be the next authoritative source to recognize this debilitating mental health disorder?

Individuals suffering from Conservapedia obsessive compulsive disorder often have strong feelings of anger, hatred, frustration, anxiety, fear and dread provoked by the thought that someone, somewhere, is reading a Conservapedia web page citing facts against atheism, evolution, homosexuality, and liberalism. These feelings can also occur when the Conservapedia web server is down and individuals afflicted with COCD cannot sit in front of their computer and rail at Conservapedia web pages that are particularly disheartening to them. In 2012, a Georgetown University study was published indicating that about 30 percent of those who grow up in an atheist household in the United States remain atheists as adults.[1]

For example, a basketball game on television is a reminder that religious people are more likely to outperform the irreligious when it comes to sports prowess (see: Sports performance: Religious faith vs. atheism). The sight of their mother's picture of Jesus or a beautiful church building can send an atheist into a valley of despair when he thinks of the dearth of art related to atheism and the lack of beautiful atheistic architecture (see: Atheist art and Atheism and architecture). The sight of their family's golden retreiver can cause atheists with SCOCD to think about the "weird renaissance" of bestiality that recently plagued secular Europe (see: Atheism and bestiality).[3]

As far as COCD/SCOCD, addictive/obsessive behaviors are often done by people living in denial about their obsessions. In short, they lack self-awareness.

Western atheism and its various disbeliefs and beliefs

Although there is good evidence suggesting atheists do not truly exists and they actively suppress their belief and knowledge of God and enigmatically engage in self-deception (see: Denials that atheists exist), hypothetically atheism is a "mega-disbelief" that is made up and held together by various "sub-disbeliefs" and/or "sub-beliefs" such as a belief in philosophical naturalism (see also: Atheist worldview and Atheism and beliefs).[5]

Atheists wavering in their disbelief

Process of atheists wavering in their belief

If at any one time one of these sub-disbeliefs and/or sub-beliefs is effectively challenged, an atheist could hypothetically remain in his disbelief (Although in a weaker form of disbelief). However, when a sufficient number of these sub-disbeliefs and/or sub-beliefs are countered, an atheists will really start to question their disbelief. This concept is referred to as graceful degradation and it is used in network theory where several nodes in a network are destroyed, but the network as a whole continues to function albeit in a more limited fashion (until enough nodes are no longer functioning and the system experiences a total loss of function).[6]

Stubborn, militant atheists with SCOCD have had their "atheist networks" overwhelmed and destroyed after reading a number of Conservapedia atheism articles and the reading the articles of other Christians. In addition, given the large number of "Atheism and...." articles at Conservapedia, stubborn, militant atheists with SCOCD are constantly being triggered when they think about matters related to atheism.

Inability of atheists to defend the atheist worldview

At the present time, atheists rarely comment on the talk page of Conservapedia's atheism article. The article now has sufficient depth and breadth to cause a catastrophic failure to their militant atheism. In terms of network theory, catastrophic failure "is a complete, sudden, often unexpected breakdown in a machine, electronic system, computer or network."[7] The popular Christian YouTube channel, PNN News and Ministry Network. indicates that Conservapedia's atheism article thoroughly dispels the falsehoods of atheism.[8]

Atheist shellshock is not unusual among atheists who have had their atheism challenged. John Frame wrote regarding the Greg Bahnsen vs. Gordon Stein debate in which Dr. Greg Bahnsen used the transcendental argument for the existence of God that "In the end, Stein walked and talked like a broken man."[10] See also: Atheism debates and Essay: Christianity and its margin of victory over atheism

Given the myriad of strong evidences for the existence of God and the lack of evidence and sound reasoning for atheism/agnosticism, it is not unusual for atheists/agnostics to report that they waver in their purported disbelief/unbelief (see: Atheists doubting the validity of atheism).

Retention rate of atheism in individuals

In 2012, a Georgetown University study was published indicating that in the United States only about 30 percent of those who grow up in an atheist household remain atheists as adults.[12] According to Dr. Mark Gray, "of those raised as atheists, 30% are now affiliated with a Protestant denomination, 10% are Catholic, 2% are Jewish, 1% are Mormon, and 1% are Pagan."[13] See also: Atheism and its retention rate in individuals and Atheism and children