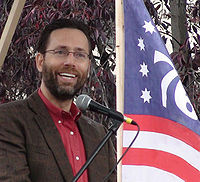 Joseph "Joe" Miller (born May 10, 1967 in Osborne, Kansas) is an attorney and Republican nominee for U.S. Senate in Alaska for the 2010 General Election after defeating Lisa Murkowski. Joe Miller's campaign focus is on beating the Democrats with a message of limited federal government and states' rights in November. Miller is a graduate from the United States Military Academy at West Point, earned a Juris Doctor at Yale Law School, and a master's degree in economics from the University of Alaska. In 2002, he was appointed a United States Magistrate Judge.

Miller graduated from West Point with a Bachelor of Science in Political Science and a commission as a 2nd Lieutenant in the United States Army in 1989. While at West Point, he was a member of the Christian Fellowship, Hunting and Fishing and Survival Games clubs. As a U.S. Army officer, Miller served as a tank platoon leader in the 2nd Battalion, 34th Armor Regiment within the 1st Infantry Division, and was awarded the Bronze Star for his leadership in combat during the Gulf War. He was entrusted with leading the 1st Combat Brigade's 93-mile road march that preceded the sweep into Iraq and Kuwait.[1] Miller was honorably discharged from the U.S. Army on September 1, 1992 and from the United States Army Reserve on May 30, 1997.

Joe Miller defeated incumbent RINO Lisa Murkowski for the Republican nomination. He was able to do this because of his solid conservative positions, Sarah Palin and Tea Party support. Joe Miller did not effectively handle the liberal media, even going so far as to have one reporter and online news magazine editor handcuffed by a heavy handed security detail he inexplicably brought to a middle school.[2] Selfish and arrogant, Murkowski decided to run as a write-in candidate. Murkowski was able to secure millions of dollars in advertising from the Alaska Native Corporations, and other native groups that Murkowski fought to get earmarks for. The Democrat candidate was weak and 30% of Democrats voted for the independent Murkowski.[3]

Miller disputed the election results citing Alaska legislation which states that the name written in must be the same as the candidates name "as it appears" on the candidates write-in paperwork, but Murkowski beat Miller by nearly 10,000 votes, only 8,000 of which were challenged on these grounds.[4][5] Miller's insistence that the courts follow the legislation as written prior to November 2010. The State of Alaska, Alaska case law, and federal election guidelines all indicated before the election, that voter intent is the important factor for determining if a vote should be counted. That law was amended in January 2011.