From Conservapedia
(Redirected from Joseph Cannon)
Jump to: navigation, search

Joseph Gurney Cannon (May 7, 1836 – November 12, 1926), also known as Joe Cannon, was a powerful Republican congressman from Illinois and Speaker of the House from 1903–1911, preceding James Beauchamp Clark and succeeding David Henderson. He served 23 terms representing rural Illinois. He was first involved in politics when Abraham Lincoln appointed him as a regional prosecutor.

"Uncle Joe," as he was called, was a leader of the conservative wing of the Republican Party, and he kept President Theodore Roosevelt in check when the president veered left. Cannon worked well with conservative Republican President William Howard Taft.

Progressives led by George Norris in 1910 revolted against his strong rule as Speaker, and replaced some of the Speaker's power with a seniority system to choose powerful committee and subcommittee chairmen. Power in the House then went to those who served longest, regardless of how much or how little the leaders like them. 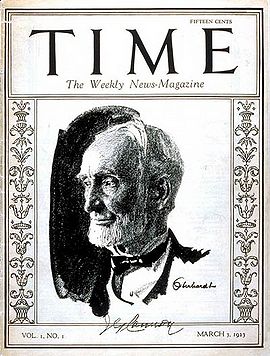 Cannon was born in Guilford, North Carolina (located in Guilford County) on May 7, 1836. After moving with his parents to a town in rural Indiana in 1840, he studied law at the Cincinnati Law School and was admitted to the bar in 1858, subsequently practicing in Terre Haute in 1858.

He moved to Tuscola, Illinois in 1859, and was the state's attorney for the twenty-seventh judicial district of Illinois from March 1861 to December 1868.

Cannon was elected as a Republican to the Forty-third and to the eight succeeding Congresses (March 4, 1873 – March 3, 1891), but defeated in the Democratic landslide of 1890. He was the chairman of the powerful Committee on Appropriations (51st Congress, elected in 1888).