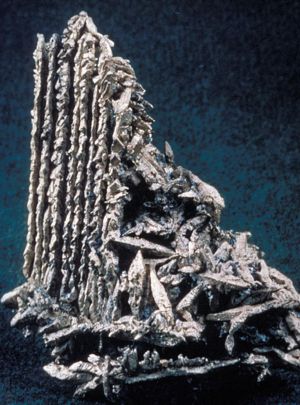 Silver can be fabricated into many things.

Silver is a chemical element. It is a precious metal which has been used as money. Silver is found natively in nature and may be mined underground.

Throughout history, silver has been one of most flexible and reliable form of barter in many societies. Unlike gold, silver is far more flexible for small item purchase and barter. It is available in many recognized forms and freely exchanged as a barter implement even during "good times".

For industrial uses it was often used in photography and film production (unfortunately it was also highly flammable; many spontaneous fires resulted in the destruction of film vaults).

Silver, considered a metal of purity, is often portrayed in folk tales and modern fiction alike as an effective weapon against vampires, werewolves, and other evil creatures. Silver nails driven into a coffin lid were thought to prevent evil spirits from rising.[1] Silver also appears a great deal in the folklore of witchcraft, and is often worn by participants in modern Wiccan rituals.[2]