Atheists and the National Academy of Sciences 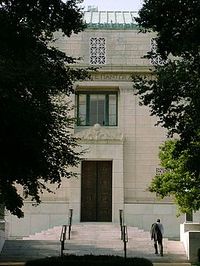 The National Academy of Sciences (NAS) is a non-profit organization created by and sanctioned by the United States federal government. The purpose of the agency is to "investigate, examine, experiment, and report upon any subject of science or art" whenever called upon to do so by any department of the government.[1] The NAS is comprised of approximately 2,000 members.

Survey of the religious beliefs of NAS scientists

Atheist apologists often point out that a 1088 survey, published in the science journal Nature by Edward J. Larson and Larry Witham, found that 93 percent of the members of the National Academy of Sciences do not believe in a personal God (The term personal God refers to a God who answers prayers and who communicates actively and effectively with people).[2][3][4]

However, they fail to point out several relevant matters given below.

Scott, who is an atheist, also declared: "The title of the recent Larson and Witham article in Nature, 'Leading scientists still reject God' is premature without reliable data upon which to base it."[6]

Poll: Over half of American scientists believe in some form of deity or higher power

See also: Scientists and belief in the existence of God and Atheism and science

Furthermore, there is experimental evidence supporting the proposition that the God of the Bible does answer prayers.[8] The Christian apologist Gary Habermas wrote: "Double-blind prayer experiments: where people pray for others with terminal illness. Habermas admitted that most such experiments have not worked, but the three that he knows of that have indeed worked were cases of orthodox-Christians praying for the sick."[9]

In 2014, the science journal Nature reported that over half of psychology studies fail reproducibility test.[13]

The majority of philosophers of religion, or those who have extensively studied the issue of the existence of God, are theists (72 percent).[14]

Atheists, parents, the desire for eliteness and personal autonomy

The NAS website declares: "Election to NAS membership in the NAS is considered one of the highest honors that a scientist can receive."[15]

Biet-Hallahmi, author of Atheism, A Psychological Profile, in The Cambridge Companion to Atheism, wrote, “…what these individuals [the most elite] had, in addition to their creativity and high intelligence, was a strong wish to create distance between themselves and their parents.” In 2012, a Georgetown University study was published indicating that only about 30 percent of those who grow up in an atheist household remain atheists as adults.[17] See also: Atheism and its retention rate in individuals and Atheism and marriage

A troubled/non-existent relationship with a father is theorized to influence a person to become an atheist.[18] Dr. Paul Vitz wrote a book entitled Faith of the Fatherless in which he points out that after studying the lives of more than a dozen leading atheists he found that a large majority of them had a father who was present but weak, present but abusive, or absent.[19]

The book Atheist Persona: Causes and Consequences by John J. Pasquini, Th.D. indicates that many of the prominent atheists (and prominent practical atheists) who had dysfunctional/absent fathers that he lists in his book also had dysfunctional/absent mothers.[20] See also: Atheism and poor relationships with parents and Irreligion and domestic violence and Atheist marriages

The General Social Survey (GSS) data on atheism uses a broad definition of atheism which can include agnostics.[21]

The abstract for journal article An Assessment of the Role of Early Parental Loss in the Adoption of Atheism or Irreligion by Frank L. Pasquale indicates:

Atheists are well known for their arrogance (see: Atheism and arrogance). Joining an elitist organization is naturally more appealing to arrogant individuals.

The abstract for the 2009 academic journal article The Religiosity of American College and University Professors which was published in the journal Sociology of Religion (which is published by the Oxford University Press) indicates:

As noted above, the NAS website declares: "Election to NAS membership in the NAS is considered one of the highest honors that a scientist can receive." While universities and colleges often publicize their achievements, most elite research universities and colleges do not make such self-serving and arrogant proclamations about working for their institutions or being associated with their institutions. They are less elitist.

Compared to medical science which has many effective medicines and surgical procedures, social science is often unreliable. For example, few economists (economics is a social science) in academia predicted the Great Depression or the 1987 financial crisis. Ludwig von Mises was snubbed by economists worldwide when he warned of a credit crisis in the 1920s.[27] Few, if any, political scientists predicted early on that Donald Trump would be the leading Republican candidate in the 2016 GOP primary.

As noted above, in 2014, the science journal Nature reported that over half of psychology studies fail reproducibility test.[30]

Sigmund Freud and the atheistic and pseudoscientific Freudian psychoanalysis has had a cultish following.[33][34] See also: Atheist cults

Freud was a proponent of the notion that theism was detrimental to mental health.[35] Oxford Professor Alister McGrath, author of the book The Twilight of Atheism, stated the following regarding Freud:

Atheists have a higher suicide rate than theists.[36] See: Atheism and suicide

Membership into NAS is a political process

Becoming a member of the NAS is a political process through election. And as noted earlier, the NAS is more likely to attract individuals who skew to the left on the political spectrum. Political processes can be influenced by corruption/discrimination.

Since World War II a majority of the most prominent and vocal defenders of the evolutionary position which employs methodological naturalism have been atheists and agnostics.[38] Creationists have faced underhanded discrimination by evolutionists (see: Suppression of alternatives to evolution). In 2013, an study found that academia was less likely to hire religious conservatives due to discriminatory attitudes.[39]

As far as corruption within the current scientific community, there is a very significant problem with scientific fraud and other lack of integrity issues.[40]

There is a significant segment of atheists who engage in the erroneous ideologies/worldviews of scientism, nature worship and neo-paganism.[41] So a certain degree of preoccupation/obsession with pseudoscience, naturalistic philosophy and scientific endeavors is not surprising within some members of the atheist community.

During his debate with Dr. Gordon Stein, Greg Bahnsen pointed out that the atheist worldview cannot account for the laws of logic, but the Christian worldview can.[45][46]

According to the Oxford Dictionaries website, a category mistake is "The error of assigning to something a quality or action that can properly be assigned to things only of another category, for example, treating abstract concepts as though they had a physical location."[47]

As noted above, strictly speaking, the existence of God is a philosophical question and not a scientific question since God is supernatural and thus outside of nature. Furthermore, as noted above, in terms of expert opinion, the majority of philosophers of religion, or those who have extensively studied the issue of the existence of God, are theists (72 percent).[48]

In addition, as noted above, there is experimental evidence supporting the proposition that the God of the Bible does answer prayers.[49]

Even if atheists were not committing a category mistake in relation to citing the religious beliefs of NAS scientists, it is an appeal to authority which is also logical fallacy.