Conservatives of the Decade, 2009 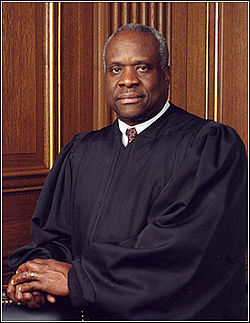 The number-one Conservative of the Decade is Clarence Thomas, Justice of the Supreme Court since 1992. Conservapedia contributors cite him for his opinions clarifying the Establishment Clause of the U.S. Constitution, and holding that capital punishment is not "cruel or unusual" within the actual meaning of the Eighth Amendment.

The immediate runners-up to Thomas were those who propounded, supported, voted for, and defended California's Proposition 8, the proposition declaring that California's constitution would recognize marriage as between one man and one woman, and not dignify any other combination (man and man, woman and woman, man and animal, etc.) with the term "marriage." Proposition 8 set the so-called "homosexual agenda" back considerably, especially since at last Californians managed to so amend their Constitution and not have California's courts invalidate that amendment.

The full list of Conservatives of the Decade is as follows:

In addition, Conservapedia remembers these famous conservatives who died in the decade just passed: