The Washington Post calls Biden "Creepy Uncle Joe" for his habit of groping wives and children.

Creepy Uncle Joe is a nickname, one of several, given to former Senator and Vice President Joseph R. Biden. In March 2020, Biden became the Democratic party putative presidential candidate for the 2020 presidential election.

According to the Washington Post, female Secret Service agents did not want to work with Joe Biden while he was Vice President. Whenever Biden's wife was not home, Biden stripped naked. The female Secret Service agents where afraid to report incidents to their superiors in fear for their jobs.[1] In the days just prior to his announcement to run, no less than 8 women of the MeToo movement complained of Biden's inappropriate grabbing and touching. Even Biden's wife, Jill, has been visibly seen creeped-out by Biden's awkward attempts at public displays of affection.[2] Biden responded by admitting America has become more conservative and then mocked critics and victims in a speech before firefighters. Biden told The View he needs to be more "cognizant" about groping women and children.[3] Even Rep. Alexandria Ocasio-Cortez remained unconvinced of Biden's alleged flip on his touchy-feelly approach to women in politics.[4]

The niece of Sen. Steve Daines accused Biden of inappropriate touching while her uncle was being sworn in when she was 8 years old. Video evidence exists to support the allegation.[5] Days after that report surfaced, Biden assaulted a 7-year-old girl during a White House bill signing ceremony.[6] 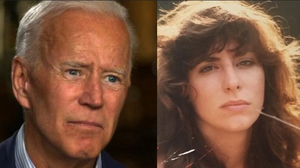 Biden and Tara Reade. Beginning in 1993 Reade made credible allegations about being assaulted and penetrated by Joe Biden and was hounded out of her job in his Senate office in retaliation for doing so.[7]

Alexandra Tara Reade is a former intern for Leon Panetta and Senate aide for Joe Biden.[8] She was trying to tell her story since it happened in 1993. It's a story about sexual assault, digital penetration which is rape, retaliation, and silencing.

Tara Reade had already come forward with part of her story after Lucy Flores accused Joe Biden of touching her inappropriately in April 2019. Tara Reade was one of seven other women to share their own stories about Biden. Reade told reporters about the way Biden would put his hands on her shoulders and run his fingers up and down her neck. She considered talking about the rest of her story but didn't because her claims of sexual harassment got her doxed and smeared as a Russian agent in April 2019.[10]

Then in January 2020 Reade tried to come forward again. This time she contacted Times Up Now, the sexual harassment organization. Ryan Grim at The Intercept reported the organization said they couldn't help her because Joe Biden was a candidate for federal office and supporting a case against him could jeopardize their nonprofit status.[11] They also pointed out that the public relations firm that works on behalf of the Times Up Now Legal Defense Fund is SKD Knickerbocker, and SKDKnickerbocker managing director is Obama's former Communication's director, the notorious Maoist Anita Dunn. Dunn is the top adviser to Joe Biden.[12]

Tara's brother and her good friend recall being told about the assault by Tara at the time it happened in 1993. Tara reached out to countless people to try to tell her story and nobody, not even the organization that was made to support women like her would listen to her. This was an actual physical assault.[13] Tara Reade was asked to take a duffel bag to Joe Biden so her boss in the office called her and say, "Hey you need to bring this to Joe Biden right away. Hurry." So she brought it to him at a gym. Reade said,

Tara Reade: He was at first talking to someone. I could see him at a distance and then they went away. And then we were in like the side area, and he just said, "Hey c'mere Tara," and then I handed him the thing. And he greeted me. He remembered my name and then it we were alone. And it was the strangest thing. There was no like exchange. Really. He just had me up against the wall. And I was wearing like a skirt, and you know, business skirt. But I wasn't wearing stockings. It was kind of a hot day that day and I was wearing heels. And I remember my legs had been hurting from the marble, you know, of the Capitol, like walking.


And I remember that kind of stuff. I remember like I was wearing a blouse, and he just had me up against the wall. And the wall was cold. And I remember it happened all at once. The gym bag, I don't know where, when I handed it to him, was gone. And then his hands were on me and underneath my clothes. And yeah, and then he went um, he went down my skirt, but then up inside it. And he penetrated me with his finger. He was kissing me at the same time, and he was saying something to me. He said several things and I can't remember everything. He said, I remember a couple of things, I remember him saying first, as he was doing it "Do you want to go somewhere else?" and then him saying to me when I pulled away, he got finished doing what he was doing, and I pulled back. And he said "Come on man, I heard you liked me." It's that phrase stayed with me because I kept thinking what I might have said. And I can't remember exactly if he said, "I thought" or "I heard", but it's like he implied that I had done this.
I don't know, for me it was like everything shattered in that moment. Because I knew, like we were alone. It was over, right? He wasn't trying to do anything more. But I looked up to him. He was like my father's age. He was this champion of women's rights in my eyes, and I couldn't believe it was happening. It seems surreal. And I just I knew I just felt sick, because when he pulled back, he looked annoyed. And he said something else to me that I don't want to say. And then he said - I must have looked shocked and he grabbed me by the shoulders. I don't know how I looked, but I must have looked something because he grabbed me by the shoulders and he said, "You're okay. You're fine. You're okay. You're fine." And then he walked away and he went on with his day.
And what I remember next is being in the Russell Building, like where the big windows are and the stairs by myself. And my body - I was shaking everywhere because - and it was cold. All of a sudden, I was, I don't know, I felt like I was shaking just everywhere and I was trying to grasp what just happened. and what I should do, or what I should say. But I knew it was bad because he was so angry. Like when he left. Like I could feel, you know, how when you know someone's angry. They don't necessarily say anything. He smiles when he's angry and you can just feel it emanating from him.
Interviewer: Do you want to share that thing that you said you don't like, you said like I don't want to say what he said that thing he said to you?
Tara Reade: Um yeah. I can, I guess I could. I mean....
Interviewer: You you don't have to.
Tara Reade: That's okay. It's just um, it's almost like giving a weapon to them.
Interviewer:' 'How so?
Tara Reade: Well it's like I don't want them to know how much it hurt. I don't you know. don't want him to know.
Interviewer: That you remembered it?
Tara Reade: Yeah. Just... just I don't know um....but yeah, I can say it, um yeah.
There was something he said that I didn't want to say. And I didn't want to say it because it's the thing that stays in my head over and over. Like, um, it's the thing that kind of stayed with me over the years. But he said, when he got me against the wall after I pulled away. And he said, "Hey, I heard you liked me". I knew he was angry right after he took his finger, he just like pointed at me and he said. "You're nothing to me". And he just looked at me, he goes "You're nothing. Nothing." And then I must have reacted and I think he only said it twice. I just heard the word "nothing" and, and I must have reacted, because that's when he took me by the shoulders and he said "You're okay. You're fine. You're okay."


But then afterwards, like it kept replaying in my head there, like last April [2019] when all that stuff came out. I got really, really sad about it. And the thing that I remember most, almost more than the assault itself was, just being told that I was nothing. And he was right. That's how people treated me. And I have no platform. So people want to know why women don't come forward, that's a good example.

Biden, then chairman of the Senate Judiciary Committee, called for extended hearings to delay a vote on Clarence Thomas's appointment to the Supreme Court to accommodate Anita Hill's last-minute sexual harassment allegations with televised hearings that traumatized the country. Biden told Sen. Arlen Specter that “It was clear to me from the way she was answering the questions, [Hill] was lying” about a key part of her testimony. Biden has been widely criticized for his racist, sexist, and bigotted handling of the hearings.[14][15]

For years, Biden failed to apologize to Anita Hill personally for the way she was treated by Biden when she testified in the 1991 hearings he chaired.[16][17][18][19] Hill described her private conversation with Joe Biden shortly before he entered the 2020 presidential race as "deeply unsatisfying."[20] Biden is known for his sexual misconduct and bad behavior with multiple women and little girls, like touching, kissing and hair smelling without their consent.[21] Several videos show Biden's inappropriate behavior with women and especially little girls. Several women have accused Biden of sexual misconduct.[22] many videos shows creepy Biden hair sniffing and kissing without permission Stephanie Carter, wife of former secretary of Defense Ashton Carter.[23] other videos shows Biden sexual misconduct to Senators daughters, like daughter of senator Cory Gardner,[24] and daughter of senator Chris Coons.[25] Former Senator Jeff Sessions was one of the few who paid attention to Biden's behavior with young girls, so he Swats Biden hands away from his granddaughter, when he wanted to touch her.[26] The niece of Sen. Steve Daines accused Biden of inappropriate touching while her uncle was being sworn in when she was 8 years old. Video evidence exists to support the allegation.[27] Days after that report surfaced, Biden assaulted a 7-year-old girl during a White House bill signing ceremony.[28]

By Memorial Day weekend after seizing power, Creepy Uncle Joe couldn't control himself again, making inappropriate sexualiazed comments to a 7-year--old girl sitting in the audience, "Look at her, she looks like she’s 19, sitting there with her legs crossed."[29]