This article covers the History of Canada from 1600 to the 1990s. For recent developments see Canada. 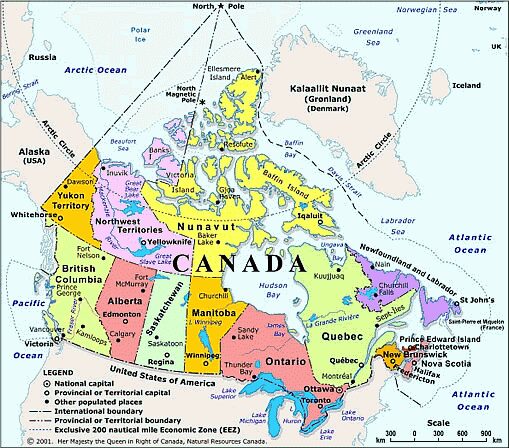 Canada on the eve of federation
On July 1, 1867, four of the British North American colonies (Nova Scotia, New Brunswick, Quebec, and Ontario) were united as the Dominion of Canada (British North America Act), and so, Canada was officially created. The BNA Act was an Act of the British Parliament, and is also referred to as the Constitution Act of 1867. The first Prime Minister, Sir John A. Macdonald, was a member of the Liberal-Conservative Party.

Since 1909, there existed a Department of External Affairs.

In 1914, Canada entered the Great War when Britain declared war on Germany on behalf of the British Empire. Despite its status as a relatively small nation with little military tradition, Canada made major contributions to the Allied war effort. Over 600,000 men enlisted to fight out of an overall population of 7,000,000.[1] Canadian troops quickly acquired a fearsome reputation on the European front and earned a reputation as courageous and aggressive fighters. In his memoirs, British Prime Minister David Lloyd George wrote that “Whenever the Germans found the Canadian Corps coming into the line they prepared for the worst.”[2]

The famous poem "In Flanders Fields" was penned by Canadian medic John McRae and another Canadian soldier, private George Lawrence Price, is recognized as being the last soldier killed in the war.[3]

Canada's contributions to the war effort furthered official and unofficial independence. Prime minister Sir Robert Borden was a member of the Imperial War Cabinet, and he greatly influenced the Imperial War Resolution IX from 1917, which stated that the dominions were autonomous nations of an Imperial Commonwealth. At the Paris Peace Conference at Versailles in 1919, it was on equal footing with the other victorious nations.

The BNA Act was later amended in 1982 by the Constitution Act of 1982. Liberal Prime Minister Pierre Elliot Trudeau, also established the Canadian Charter of Rights and Freedoms as part of the Constitution Act. The Charter sets clear, fundamental freedoms for all Canadians. It has been cited in thousands of court challenges and is the fundamental legal document supporting the national legalization of same-sex marriages and the prevention of government intervention regarding abortion. Dominion Day was also changed to Canada Day in the process, always celebrated on July 1, unless that day falls on a Sunday, when it is celebrated the following Monday.

The 1993 Canadian general election was an extraordinary one that saw the collapse of a once stable two-party-plus system and the emergence of a less stable one-party dominant system. The governing Progressive Conservative party went down to the most crushing defeat of any governing party in Canadian electoral history, and two new parties displaced two old ones. A new conservative party based in Alberta, the Reform Party, captured the political right. The strategic interests of both of the two new parties, Reform and the independent Bloc Québécois (active only in Quebec), combined to undermine the integrative role that Canadian political parties have traditionally served.[4]

This is a bibliography of major works on the History of Canada.

Historiography and guides to the scholarly literature