Countries with high levels of atheism, such as North Korea, have not necessarily been the most peaceful countries.[1]

Louise Ridley, assistant news editor at the Huffington Post UK, wrote in her article entitled Does Religion Really Cause War - And Do Atheists Have Something To Answer For?:

Britain's thinktank Theos notes: "For the first, two academics (Charles Phillips and Alan Axelrod) surveyed 1,800 conflicts and found that less than 10% involved religion at all."[3]

The abstract for the academic paper Empirical Perspectives on Religion and Violence by Joshua David Wright and Yuelee Khoo indicates:

"Scott Atran is the first atheist to publicly come out and admit the historical nonexistence of the oft-claimed connection between religion and war in Foreign Policy:

Moreover, the chief complaint against religion -- that it is history's prime instigator of intergroup conflict -- does not withstand scrutiny. Religious issues motivate only a small minority of recorded wars. The Encyclopedia of Wars surveyed 1,763 violent conflicts across history; only 123 (7 percent) were religious. A BBC-sponsored "God and War" audit, which evaluated major conflicts over 3,500 years and rated them on a 0-to-5 scale for religious motivation (Punic Wars = 0, Crusades = 5), found that more than 60 percent had no religious motivation. Less than 7 percent earned a rating greater than 3. There was little religious motivation for the internecine Russian and Chinese conflicts or the world wars responsible for history's most lethal century of international bloodshed.

Not only does Atran accept the argument I originally presented in a WND article before refining it in The Irrational Atheist, but his article is actually much less of a Fighting Withdrawal than the misleading subtitle - What we don't understand about religion just might kill us - would lead the casual reader to believe."[6]

It is estimated that in the past 100 years, governments under the banner of atheistic communism have caused the death of somewhere between 40,472,000 to 259,432,000 human lives.[8] Dr. R. J. Rummel, professor emeritus of political science at the University of Hawaii, is the scholar who first coined the term democide (death by government). Dr. R. J. Rummel's mid estimate regarding the loss of life due to communism is that communism caused the death of approximately 110,286,000 people between 1917 and 1987.[9]

Atheism and the issue of world peace

Historically, the most prominent and vocal defenders of the theory of evolution which employs methodological naturalism have been atheists or agnostics.[11]

According to Annika Mombauer, senior lecturer in history at the Open University in London and the author of numerous books and articles on World War I:

For more information please see: Darwinism and World War One and Darwinism and the Nazi race Holocaust and Social effects of evolutionary ideology

The March 9, 1907 edition of the NY Times refers to Ernst Haeckel as the "celebrated Darwinian and founder of the Association for the Propagation of Ethical Atheism."[18] 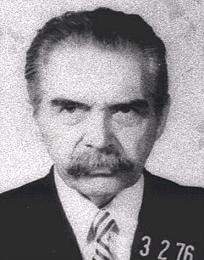 Dr. Josef Mengele's evolutionary thinking was in accordance with social Darwinist theories that Adolph Hitler and a number of German academics found appealing.[23][24] Dr. Joseph Mengele studied under the leading proponents the "unworthy life" branch of evolutionary thought.[25] Dr. Mengele was one of the most notorious individuals associated with Nazi death camps and the Holocaust.[26] Mengele obtained a infamous reputation due to his experiments on twins while at Auschwitz-Birkenau.[27]

As noted earlier, evolutionary ideas significantly influenced the thinking of the nineteenth and twentieth-century Communists.[30][31] Karl Marx wrote in a letter the following, ""Darwin's book is very important and serves me as a basis in natural science for the class struggle in history." Darwin's ideas also influenced the thinking of Engels, Vladimir Lenin, and Joseph Stalin.[32]

Italy was on the Axis powers in WWII and an ally of Nazi Germany.

Benito Mussolini (1883-1945) was the Fascist dictator of Italy. A life-long socialist intellectual[33] and self-proclaimed "socialist heretic", he was nominated prime minister by Vittorio Emanuele III di Savoia, King of Italy, in the time of World War II. He was head of one of the strong forms of government seen in Europe in this time. He created the political structure Fasci Italiani di Combatimento, which is what later would be known as Fascism, a term which was later used to describe the merging of government and corporation. He was responsible for several war crimes in Ethiopia and Yugoslavia.

Dr. David N. Menton wrote about the effect Darwinism had upon Mussolini:

Jesus Christ and his apostles taught a gospel of love.[38]

Jesus Christ and his apostles taught a gospel of love.[39] For example, the New Testament teaches that a husband is to love his wife as Christ loved the church (Ephesians 5:25). See also: Agape Economic instability is a causal factor for war.[41]

The Christian relief organization World Vision Australia notes that out of the 150 or more major conflicts since World War II, 130 of these were in poor countries.[42] And economic instability was one of the causal factors of WWII.[43]

In terms of economic development, biblical Christianity has historically had a positive affect on countries.[44] Harvard University historian Niall Ferguson declared: "Through a mixture of hard work and thrift the Protestant societies of the North and West Atlantic achieved the most rapid economic growth in history." (See: Protestant work ethic and capitalism).[45]

Dr. William Lane Craig points out that the social science research indicates that atheists who have family/social contacts with religious people give more to charity than atheists who do not have such an influence.[46] The atheist and lesbian Greta Christina told the journalist Chris Mooney on the Point of Inquiry podcast, "there isn't one emotion" that affects atheists "but anger is one of the emotions that many of us have ...[it] drives others to participate in the movement."[47]

The atheist Brendan O'Neill wrote in The Telegraph in an article entitled How atheists became the most colossally smug and annoying people on the planet: "These days, barely a week passes without the emergence of yet more evidence that atheists are the most irritating people on Earth."[50]