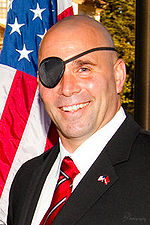 Gunnery Sergeant Nick Popaditch (born 1967) is the Republican candidate for California's 51st district seat held by career politician Bob Filner. Nick is known as the "Cigar Marine" to the national media and "Gunny Pop" to his fellow Marines. April 9, 2003 Nick was photographed by the Associated Press during the fall of Baghdad riding on his M1A1 tank, smoking a cigar while Saddam Hussein's monument loomed in the background. He was awarded the Silver Star for combat actions in Fallujah.

Born in Terre Haute, Indiana to Duke and Dolores Popaditch, Nick was one of five siblings. He would graduate from Terre Haute North Vigo High School. He attended a semester at Indiana State University before going to San Diego State University. Nick is married to his wife April and they have a teenage son.[1]

April 9, 2003: Staff Sergeant Popaditch from the 3rd Battalion, 4th Marines Regiment is photographed in the fall of Baghdad by coalition forces.

April 18, 2004: In the Battle of Fallujah, Sgt. Poditch was wounded in the head by an exploding rocket-propelled grenade. He lost an eye and is deaf in one ear as the result.

Popaditch writes a book “Once a Marine: An Iraq War Tank Commander’s Inspirational Memoir of Combat, Courage and Recovery.” The book is a tribute to sacrifices made, from fellow Marines in the midst of war to family at home. Also, his story was made into a movie.

As the Republican candidate, he seeks to ouster Democratic Representative Filner, first elected in 1992 and re-elected in 2008 with 73% of the vote.[2]