Karine Jean-Pierre is chief propagandist for the Biden regime as of May 13, 2022 and a recession denier. She is married to CNN correspondent Suzanne Malveaux,[1][2] sparking concerns of conflict of interest.[1] And as it was put: the personal nexus between cable outlets and the political sphere.[3]

Her philosophy: "I always say, if you’re not white, male, straight, or wealthy you're under attack, I mean there is a target on your back."[4]

She has previously claimed, the 2016 presidential election was "stolen" from Hillary Clinton and that Georgia Republican Gov. Brian Kemp "stole" the 2018 gubernatorial election from Stacey Abrams.[5]

She was the national spokeswoman and senior adviser for ultra lefty MoveOn[4] from April 2016 to August of 2020.[6] The radical group has a long history of trafficking in bigotry. It even opposed Senator Schumer because, in its own words, "our country doesn’t need another Joe Lieberman."[7] Earlier, MoveOn was accused of anti-Christian bias.[8]

She previously served as deputy chief propagandist for the Biden junta who, according to the New York Times, is "the first openly gay spokeswoman and the first Black woman in decades to address journalists on behalf of the president."[9] Politico reported in October 2021 that Jean-Pierre was "talking to a number of different key experts in the administration to make sure she has a fundamental understanding about the issues.” Psaki said she planned to stay on until "sometime next year," so that when Jean-Pierre assumed the podium critics of the White House can be called racist leading up to the 2022 midterm elections.[10] Karine Jean-Pierre and her fellow liberals call everyone who questioning 2020 Election as conspiracy theorists, while she hypocritically consider 2016 election and 2018 Georgia gubernatorial elections as stolen elections, she also was promoter of Trump-Russia collusion hoax.[11]

On September 5, 2022 Jean-Pierre reported that the Russians had taken the unprecedented step of shutting own the Nordstrom pipeline.

Jean-Pierre has imagined that unnamed 'experts inside and outside the administration' think economic recovery is right around the corner.[12]

In May 2022, the conversation between Fox News' Peter Doocy and Jean-Pierre went like this:[14]

DOOCY: "Americans are now spending $5,000 a year on gasoline. That’s almost double what they did a year ago. Where are people supposed to go to get all that extra cash?"

JEAN-PIERRE: "To get the extra cash to pay for gas?"

Jean-Pierre displaying her eminent qualifications to be as coherent as Joe Biden and spokesperson for the president to the world.

One of her most famous gaffes when she declared that the White House supported Ukraine’s admittance into NATO. The official White House transcript of the briefing reads as follows:[15]

The remarks led commentators to believe on issues of global thermonuclear war, Jean-Pierre was clearly out of her league, although in retrospect Jean-Pierre can be seen as an active propagandist for the globalist agenda to provoke war in Ukraine. In an interview with CNN on March 20, 2022, Ukrainian dictator Volodymyr Zelensky said “I requested them personally to say directly that we are going to accept you into NATO in a year or two or five, just say it directly and clearly, or just say no. And the response was very clear, 'you’re not going to be a NATO member, but publicly, the doors will remain open.'”[16] 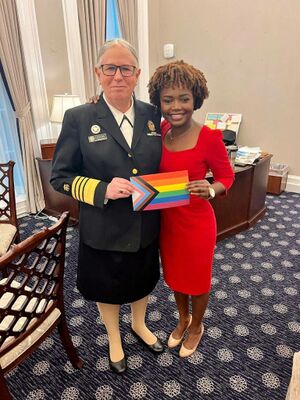 Newsmax reporter Emerald Robinson asked Karine Jean-Pierre to explain how the Center for Disease Control (CDC) was testing for the Delta variant "How does the CDC know when they come across a delta variant case? Jean-Pierre answered, “Because the experts say so.”[19]

Jean-Pierre is a Trump-Russia hoaxer.[20]

She is a veteran anti-Israel activist.[6][2] Raising worries, the already White House's bias will only worsen.

Sundance of the Conservativetreehouse described Jean-Pierre's tenure this way:

As Biden rolled out a catchphrase trying to negatively characterize the GOP as "ultra-MAGA, referring to former President Donald Trump's "Make America Great Again" slogan.  It was later revealed that the label was the result of a six-month, liberal-funded focus group research project. His spokesperson, Karine Jean-Pierre, talked and talked (Aug/2022) but couldn't explain the catchphrase, Biden's 'semi-fascism' jab against GOP,' of course.[22]