The Laptop from hell is an incriminating piece of evidence of criminal activity between the Biden family and the U.S.-backed neo-Nazi Maidan regime.

On October 20, 2020, the FBI announced that it was in possession of Hunter Biden's laptop computer, that the emails were authentic, and the laptop and emails were not part of a Russian disinformation campaign designed to interfere in the United States 2020 presidential election, despite the best efforts of the Biden campaign and their allied Big Tech and mainstream fake news media organizations to deceive the American people into believing so. The laptop was being held as evidence into a money-laundering scheme.[2]

After that the biased NYT subdued the Hunter Biden laptop scandal in 2020 - before the election, by March 2022, the NYT suddenly found the time to write about it. 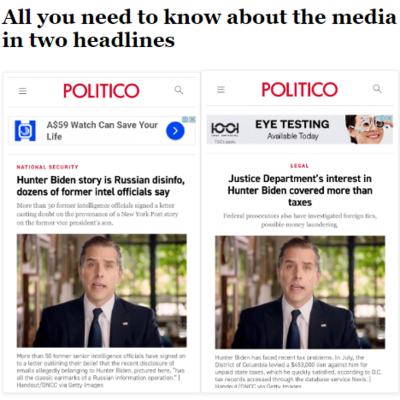 Schweizer's 2018 book "Secret Empires: How the American Political Class Hides Corruption and Enriches Family and Friends" and a follow-up, "Profiles in Corruption: Abuse of Power by America’s Progressive Elite," presented evidence that five members of the Biden family cashed in while Joe Biden was vice president.

President Joe Biden sat down Sunday with CBS News’ Scott Pelley on 60 Minutes for his first media interview since the Super Bowl in February. He again denied any wrongdoing by his son, saying nothing Hunter Biden had done affected him or the country. That claim is very much in doubt, but Pelley appeared to lend weight to it by claiming, erroneously: “Congress investigated Hunter Biden’s job with a Ukrainian company at the time that his father ran Ukrainian policy in the Obama administration. ...

Following the release of the The Twitter Files, in Dec 2022, James Comer (R-KY) said on that he wants "every person at Twitter" to speak before Congress about the social media company's decision to limit access to the Hunter Biden laptop story.[7] A breakdown of media coverage of the Twitter files showing how the social media giant handled the Hunter Biden laptop story in 2020. (Fox News)

On December 2, 2022, journalist Matt Taibbi of Rolling Stone magazine began releasing the #TwitterFiles, otherwise known as Twitter's internal communications related to censorship, targeting, and political interference. The perception of the public impact of the revelations was likened to the Stasi files when the Soviet Union collapsed and the Berlin Wall came down.

This initial document dump focused on the decision-making process that Twitter invoked to suppress the Laptop from Hell in the run up to the 2020 Presidential election. The internal emails released show that Twitter was absolutely engaging in political manipulation and, after they suspended the New York Post, the oldest newspaper in the United States, looking for some sort of policy justification for their political actions.

According to Taibbi, "The problem with the ‘hacked materials’ ruling, several sources said, was that this normally required an official/law enforcement finding of a hack. But such a finding never appears throughout what one executive describes as a ‘whirlwind’ 24-hour, company-wide mess.”

In one incredible exchange, Twitter execs receive a list of accounts from the Biden Administration to “review.” The accounts were reportedly later suspended. Democrat Rep. Ro Khanna was the only Democrat that expressed concern, trying to mediate with Twitter execs and reminding them the First Amendment prohibits government suppression of free speech. The Twitter files reveal collusion between government and private sector business to suppress human rights, which is the original and basic definition of fascism.