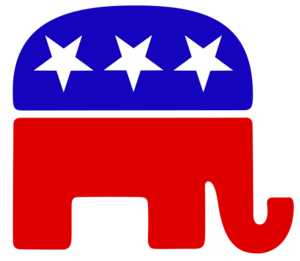 Logo of the Republican Party. The Republicans have been America's conservative party since the 1890s.

American conservatism today is a position on primarily social issues that began with the successful STOP ERA movement in the 1970s, and which has a home in the Republican Party by virtue of the book A Choice Not an Echo (1964).

Its roots prior to the 1960s and 1970s are less clear. Some based it in a longstanding tradition in the United States that supports limited government, checks and balances on power, strict adherence to the U.S. Constitution, and Christianity in general.

Non-conservatives have tried to define it. Abraham Lincoln, who mistakenly rejected the significance of morality in government by seeking to allow slavery when he campaigned for president in 1860, asked rhetorically, “What is conservatism? Is it not preference for the old and tried, over the new and untried?”[1] Satirist Ambrose Bierce, in his The Devil's Dictionary (1906), suggested that a conservative is “a statesman who is enamored of existing evils, as distinguished from the Liberal, who wishes to replace them with others.” Historian Gregory Schneider defines conservatism as "a defense of tradition."[2] To a non-conservative, the conservative view of government is to support existing ways of life. Conservatives are partial to institutions that were built up gradually and whose current form distills the accumulated wisdom of generations. Liberal proposals to restructure society are condemned as "utopian" and "social re-engineering."

The defect in equating "conservatism" with tradition is that much of conservatism does not rely on tradition at all, such as support of the very non-traditional U.S. Constitution in 1787, or support for homeschooling and innovative laws against abortion today. Great conservative laws, such as the Patent Act of 1790, the Sherman Act of 1890, and the Taft-Hartley Act (1947) were innovative and not based on tradition at all.

The word "conservative" is from Le Conservateur, the name of an ultraroyalist French periodical founded by Chateaubriand in 1818. In the early 1830s, the word was adopted as a self-description by the Tories in Britain, as well as by John Calhoun in the U.S.

As an intellectual movement, conservatism can be traced to Edmund Burke, a British politician who provided a statement of the ideology in Reflections on the Revolution in France (1790).[3] Burke's views were developed in response to the social re-engineering projects of the French revolutionaries. Burke was a Whig and a supporter the American Revolution. His political position was to the left of the Tories, a major party that supported royal authority against the parliament. American Tories, or Loyalists, fled to Canada during the Revolution, so this faction played no role is subsequent U.S political history. Liberals may identify conservatism with right-wing views. But as this example illustrates, conservatives are not necessarily the most right-wing group on the political spectrum. According to Burke, "change is the means of our preservation." So the idea that conservatives oppose all change is another liberal canard.

Since America lacks an aristocracy or an established church, the tradition that American conservatives defend is not simple to define. Schneider identifies American conservatism with support of republicanism, "the rule of law and the Christian religion," and a defense of "Western civilization from the challenges of modernist culture and totalitarian governments."[2]

Burke was read by the first generation of American conservatives, including Alexander Hamilton, John Adams, and John Randolph. Hamilton founded the Federalist Party, America's first conservative party, in 1789. The Republicans, a rival pro-French faction led by Thomas Jefferson, emerged in 1793 during the Citizen Genêt affair. In 1796, Adams won the presidency as the Federalist nominee. In the election of 1800, Jefferson defeated Adams in America's first hotly contested presidential election. The Jeffersonian Republicans were classical liberals, with a focus on limited government. The modern trade-union-oriented variety of liberalism did not emerge until the late nineteenth century. So Jefferson was actually quite conservative by today's standards. The intensely ideological politicking of 1800 dissipated at the end of the French Revolution. By 1816, the Federalist Party had dissolved altogether. Yet James Monroe, president from 1817 to 1825, freely adopted various Federalist positions regarding tariffs, a national bank, and other issues. The ideological differences that had loomed so large earlier were left behind and an "Era of Good Feelings" dawned.

Andrew Jackson's 1824 campaign for president divided the Republican Party into Jacksonians (who later organized as the Democratic Party) and anti-Jacksonians, who contested the 1828 and 1832 elections as the National Republican Party. This party nominated Henry Clay, who proposed a nationalist agenda called the "American System." After the National Republicans collapsed, anti-Jacksonians reorganized as the Whig Party. The coherent ideology of the National Republicans was abandoned so that the new party could tailor its appeal regionally. Although the Whigs proclaimed themselves conservative, the political positions of the party's various state organizations diverged widely. Its nominees for president were non-ideological war heroes.

The modern Republican Party was founded in 1854 as an anti-slavery party. Although the new party adopted the name of Jefferson's party, it is not linked to it organizationally. In the election of 1860, Lincoln, the Republican nominee, emphasized that federal control of slavery in the federal territories was a conservative idea, based on a straightforward reading of the U.S. Constitution. Stephen Douglas, the Democratic nominee, supported the Supreme Court's Dred Scott decision, which proclaim slaves private property protected by the U.S. Constitution, beyond federal control. The liberal wing of the Republican party, or Abolitionists, favored the abolition slavery nationally, a position not based on the Constitution. Once the slavery issue was resolved, the Democrats became simply the party of the South, the Republicans the party of the North.

The rise of labor unions in the late the nineteenth century led to renewed ideological struggle. The founding of the Populist Party in 1891 marks the entrance of modern class warfare liberalism into mainstream American politics. This sort of liberalism is an Americanization of the socialist movement that arose in Europe at about this time. It turns the earlier meaning of "liberal," someone who supports freedom, on its head.

President Woodrow Wilson, a Democrat, used World War I as a pretext to impose his "progressive" agenda, including federal control of the national economy. Americans reacted by voting for Warren Harding and "normalcy" in 1920. The election of 1924 was the "high tide" of American conservatism, with both major party nominees for president espousing conservative views.[4] The 1920s was also a golden age of conservative writing. Irving Babbitt wrote the classic Democracy and Leadership (1924). The Democratic Party returned to liberal control when New York Governor Al Smith was nominated for president in 1928. Deflationary policies initiated by the Federal Reserve Board Governor Benjamin Strong led to a depression in 1929-1934 under President Hoover.[5] In 1933, Franklin Roosevelt, the newly elected Democratic president, wisely allowed a banking panic to run its course. A recovery of historic proportions followed. Liberalism and Roosevelt's "New Deal" got the credit, but the deleveraging of the banking system was almost certainly a more significant factor.

Roosevelt was overwhelmingly reelected in 1936 with a huge Congressional majority. In 1937, America suffered under its most left-wing government ever. The trade unions concluded this was their moment. The wave of unrest that followed included an enormous "sit-down" strike against General Motors in Flint, Michigan. The strikes sent the economy reeling, and there was a "Roosevelt Recession" in 1937-1938. At the end of 1937, the southern Democrats defected from Roosevelt's coalition to form a "Conservative Coalition" with Republicans. The Coalition was at first led by Senator Josiah Bailey of North Carolina, who issued a "Conservative Manifesto" in December 1937. When a bill to enlarge the U.S. Supreme Court with additional justices nominated by Roosevelt was defeated, the planned "Second New Deal" had to be aborted. Despite Roosevelt's mismanagement of the economy, the Democrats continued to blame Hoover for economic trouble long after the former president had left the political stage. However, the Conservative Coalition continued to dominated Congress until 1961.

With Fall of France and the Battle of Britain, issues of foreign policy overshadowed economic concerns in 1940. The rise the Nazis left Republicans divided between isolationists and interventionists. All the party's leading figures were isolationists, but this position was ballot box poison. So the 1940 convention turned to Wendell Willkie, a dark horse and Wall Street industrialist who had never run for office before. Roosevelt won an unprecedented third term without difficulty.