does the following phrase contain a typo or just a word I don't know? "and remaining food wtocks were forcibly removed"? Jsparks 03 May 2011

It may be a bit of hype to claim all Ukrainians are for use of the Ukrainian dialect, spellings, etc. The Russians are true multiculturalists, and many Ukrainians are for positive integration and cooperation with both Russians who are resident in Ukraine, and their Russian Federation neighbor. There is also a segment of Ukrainian nationalists - many who are quite literally fascists and hate Russians, Jews, Poles, etc. The Soviet Union battled them throughout its existence. The Nazis used them to commit atrocities on civilians. The United States, under James V. Forrestal, mistakenly considered them anti-communists, when in fact their true motivation is anti-ethnic Russian hatred. Since czarist times, these Ukrainian nationalists view Russia, later the USSR, and now the Russian Federation as seeking to dominate and control Ukrainians. Not all Ukrainians then, or now, hold this belief.

The well publicized culture of corruption can be cited as to why the Ukraine (like Palestine), may not be fit to hold the status of a sovereign state. It is not a "frontline" state, as Deep Staters repeatedly announced in the impeachment hearings. Sevastopol will never be a NATO naval base, anymore than the UK would allow Dublin, Ireland to be a U-boat sanctuary during two World Wars.

Question: When did the Ukrainian nationalist community jump ship from the anti-communist GOP to the Democrats in the United States?
Answer: In 1992, with George H.W. Bush's famous "Chicken Kiev" speech to the Ukrainian parliament, encouraging them to remain in the Russian Federation. The Clinton administration solidified this bloc with the Budapest Protocols of 1994 recognizing Ukrainian independence. With all the corruption we've seen, of paying Paul Manafort, the Podesta brothers, and Hunter Biden protection money to a big state sponsor, is just a continuation of the corruption during Soviet times.

Khrushchev, who was a fully integrated Ukrainian multiculturalist, served on the Politburo to represent Ukrainian interests and eventually rose to head of state. Khrushchev rewarded Ukraine with the Crimea (without a plebiscite of its Russian ethnic majority) in 1954 because he believed communist ideology had defeated Ukrainian ethno-fascism for all time. Khrushchev won his position in the Soviet hierarchy because he organized Ukrainians into the Red Army against the Germans and their allied Ukrainian Banderists - the Organization of Ukrainian Nationalists - which (1) served the Waffen SS, (2) organized the Ukrainian parliament in 1992, (3) took over the Democratic Ethnic Outreach Council (DEOC) after Clinton's recognition of Ukraine in 1994, and which Alexandra Chalupa is a director; (here's an interesting item from 1988, Ex-nazis Among Leadership Ranks of Republican Outreach Groups; those same ex-Nazis and their ideology have now, for the past 25 years, been in the leadership ranks of the Democratic party, Chalupa and Vindman being two of the most visible).

Bottomline: We should be careful about pandering to anti-Russian xenophobes on the issue of the Ukrainian language. It is exactly what they want, and it's being used as a prime issue to impeach a president and overturn American democracy. RobSDe Plorabus Unum 15:14, 23 November 2019 (EST)

This is no small issue

Even in Soviet times, NATO was regarded as a fascist entity continuing the fight of the Third Reich. In this picture, you see Biden's buddies with both the Swastika and NATO flags.

The current fighting is in the Donbass region, site of [Mamiya Hill] and the Monument to the Liberators of the Donbass, Donetsk, Ukraine commemorating the victory at Stalingrad. Hitler chose this ethnically mixed region to exploit anti-Russian sentiment and bet the farm on the outcome of the war. Here's a Soviet era film narrated by Burt Lancaster taped on Mamiya Hill (well worth watching, at least the first 5 minutes). A week ago Russian TV announced the monument is being restored. Here's the Sword of Stalingrad being presented to Stalin by Churchill and FDR at the Teheran Conference. The Sword is depicted in Europe's tallest monument on Mamiya Hill.

The pro-Deep State, military industrial complex, pro-Ukraine, anti-Russian impeachment movement is essentially for the US and NATO to go to Crimea and the Donbass and finish the job that Hitler screwed up. Wake up! RobSDe Plorabus Unum 16:44, 23 November 2019 (EST)

All of which reminds me we never settled on your Christmas present. How about a nice bare-chested Putin riding a shark duvet cover? JohnZ (talk) 17:33, 23 November 2019 (EST)

Putin will be gone before Trump. You and your Ukrainian neo-Nazi buddies and Democrats need to find the next Russian leader to demonize. The issues remain the same. RobSDe Plorabus Unum 17:54, 23 November 2019 (EST)

Really? You are so far off base you can be called out with a softball toss to first base. RobSDe Plorabus Unum 22:38, 23 November 2019 (EST)

Bless your heart. You think the likes of Romney, Rubio and Cruz aren't itching to pull the trigger? That the establishment GOP doesn't want its party back? They'll break late and quick, just like they did with Nixon. JohnZ (talk) 23:40, 23 November 2019 (EST)

Republicans are not opportunists for momentary advantage (unlike Commucrats). The notion of precedent still applies. An impeachment of Trump on such flimsy terms would basically destroy Article I of the Constitution, all Supreme Court precedents on Executive Privilege, the Bill of Rights, and host of other Amendments. It's not Trump's career at stake, it is the future of the Office of the Presidency, constitutional due process rights of all citizens, and voter rights. GOP is just baiting the hook for the Commucrats to go down this road.

Politicians have a saying in America, "Never stand in the way of your opponent as he self destructs." All GOP House and Senate members know full well a vote against Trump is the death knell of the Republican party. The Commucrats will survive, but the Democrat party is currently self-destructing.

Trump has already destroyed both - the GOP establishment and the DNC establishment. Targeting Trump only makes Deep State crimes more of an emotional issue for Trump supporters. Both Kennedy and Nixon (who ran against each other in 1960) were railroaded out of town by the Deep State; Trump is their third attempt at overturning an American election (I seriously doubt if social media existed in 1974, the fake news media could've won against Nixon). The result has been endless wars and imperialism. The American people want their government back. That is not really a partisan issue. RobSDe Plorabus Unum 00:25, 24 November 2019 (EST)

You forget quite how far removed you are from the thinking of the average GOP senator. You might not like it, but for them you're living in a shack out on the very farthest edges of Crazytown. They want your vote, for sure, but they don't take many of your concerns the least bit seriously. They also know you loathe liberals and Democrats in general, and are unlikely to abandon the party for good as long as it remains solid on issues like 2A and abortion.

So for those not up for re-election until 2022 or 2024, the only real questions are a) how angry are you still likely to be with them when primary season next rolls around, and b) how likely is it they'll face a viable challenger willing and able to harness that Dolchstoß anger?

"Considerably less" is a fairly safe bet for a), given that liberals are bound to have done something to enrage you in the meantime, and "not very" is equally safe for b), given the relative scarcity of genuinely charismatic populist demagogues. JohnZ (talk) 23:24, 24 November 2019 (EST)

Watch the first 5 minutes of the Russian/Burt Lancaster film linked above; then wonder why Angela Merkel refuses to help the Ukraine against Russia, and why Democrats want Trump to pick up where Hitler left off. RobSDe Plorabus Unum 00:41, 24 November 2019 (EST)

The music at the start of that film is "The Sacred War" battle song from WWII, which is performed regularly at public concerts throughout Russia, particularly since 2014. Read the lyrics here and watch a 2 minute performance. These fascist vermin scum testifying before Schiff's committee, and any idiot fool who listens to them, have no idea what they are trying to get America into. The NATO flag will never fly over Crimea.
And note, even though the song is not the Russian national anthem, people rise to their feet, you don't see any kneelers - easily verifiable by the dozens of public performances posted on Youtube in the past two years. RobSDe Plorabus Unum 03:34, 24 November 2019 (EST)

Good grief. The "civilizational fault line" runs right through Russia, too, which you'd know if you weren't such a rotten student of history. Pretty much its entire 18th and 19th centuries can be described as a back-and-forth between an Enlightenment-inspired desire to modernise and a reactionary conservative Slav-ism. It's even possible to see echoes of the schism in Trotsky's expansionist revolutionary ideal vs. Stalin's inward-looking "socialism in one country".

And whilst we're talking about Stalin, you seem oblivious to such trifles as the Ukrainian famine / genocide of 1932-33, which offers a perfectly good rationale for WWII Ukrainian nationalist sentiment without any need to invoke fascist rabble-rousing. Couple that with the general brutality of life under the Soviet regime and it's difficult to understand how an avowed anti-communist like yourself can be so blithely dismissive of ordinary Ukrainians' desire to be free of Soviet / Russian influence.

I'll note once again the hilarity of watching you faithfully parrot Russian talking points on Ukraine: an erstwhile scourge of the Reds, now playing the useful idiot for Putin because it suits your newfound enthusiasm for US isolationism. JohnZ (talk) 23:24, 24 November 2019 (EST)

Although there are numerous sources for this, in the film Shoah about the holocaust, eyewitness testimony about transports arriving at the Treblinka extermination camp (with 12,000 to 15,000 victims daily) claim there were typically only 4 German guards, 10 Ukrainians, and a few Latvians who unloaded the trains and herded the victims to the extermination site. Ukrainian Nazis were considered the most cruel and enthusiastic about their work. These facts have long been hidden from American audiences, is one integral fact of Ukrainian-Russian tensions since WWII, and has been exploited by the CIA ever since. Support for Ukrainian Nazis is core of the Obama and Biden regimes' policy toward Ukraine. The Soviet Union and Russian Federation have never been able to stomp out Ukrainian fascism the way they did in East Germany and other Soviet satellites. RobSLet's Go Brandon! 14:49, February 13, 2022 (EST) 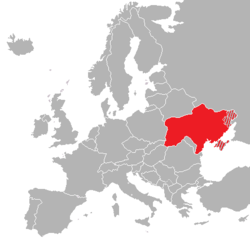 Hello, I think this map should be added since it follows the format of other countries in Conservapedia. It contains disputed regions as disputed.--CatolicoAustral (talk) 10:56, May 11, 2022 (EDT)