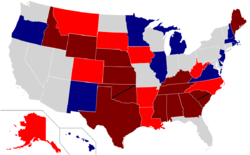 The 2014 Midterm Elections began with the Texas primary on March 4, and continued with a primary or a "runoff" nearly every week somewhere in the United States until Tuesday, September 9.[1] Soon thereafter early voting began in some areas, culminating in the general election day on Tuesday, November 4.

The election saw the complete and utter rejection of Democrats, with Republicans capturing the U.S. Senate, expanding the U.S. House and winning trifecta control in 31 states.

Every seat of the 435 member chamber was up for election. The new term will be the 114th United States Congress.

[1] Indicates a term-limited or retiring candidate