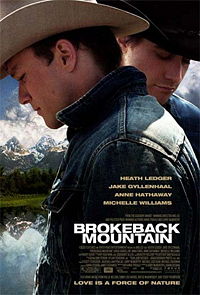 Brokeback Mountain (2005) is a movie about a pair of teenage cowboys who perform a homosexual act during a time of prolonged seclusion from others (particularly from females). Afterwards, they part ways and marry beautiful, dedicated and loving women. But four years later, their past comes to haunt them and destroys not only their lives but the innocent lives of their wives and children. Audiences witness the families torn asunder in waves of agonizing revelations, as the men continue to meet periodically, telling their wives they are going fishing.

Despite the destructive message of this film, liberally minded institutions with Hollywood values rewarded the homosexual agenda by festooning the movie with several awards including three Oscars, four BAFTA awards, and four Golden Globes. As Bill O'Reilly remarked in a monologue:

I also think the entertainment industry should be up front in explaining what films it values and why it finds them especially worthy. Most Americans are not gonna see "Brokeback Mountain" because they don't relate to the subject, and if Hollywood is now in the "culture-shaping business," it should admit it. So look for Oscar night to be a huge night for shepherds who roam the range in their own consensual way. Hollywood is making a statement and Americans should be geting [sic] the message loud and clear.[1]

Christian groups led a furious campaign against Hollywood yesterday, accusing the Golden Globe Awards of promoting films with gay or “leftist” themes to serve a political agenda. The criticism was made after Brokeback Mountain, a film about the forbidden love between gay Wyoming cowboys, won four awards... Oscar pundits are now questioning whether the Academy of Motion Picture Arts and Sciences will also reward Brokeback Mountain, potentially souring Hollywood’s relationship with the American ticketbuying public even further... Right-wing radio talk show hosts also took pot shots at the Globes yesterday. Stephen Bennett, of Straight Talk Radio, said: “When Hollywood is pumping out anti-family movies with sexually explicit, twisted and perverse themes that glorify homosexuality, transsexuality and every other kind of sexual immorality — then awarding itself for doing so — Middle America better take note. “Last night Hollywood exposed its own corrupt agenda. [It] is no doubt out on a mission to 'homosexualise' America.”[2]

Many other sources have also been outraged how Hollywood supported the gay agenda with the over promotion of this film.[3][4] As such, the film was also notorious as being an initial demonstration of how the higher ups in Hollywood were willing to go to radical measures to force their will upon the public, as they proceeded to force various video rental stores such as Versatile Video and Blockbuster Video to stock up for sale various copies of the movie regardless of whether their local customers actually wanted to buy it.

Brokeback Mountain became the "buzz" that everyone was talking about in 2005 and people were admonished for not having seen it and not being "open-minded" to a "different" love story. In that respect, the advertising concealed the theme of homosexuality from the public, merely referring to it as a modern day "love story" and concentrating on the appealing rugged cowboy element and picturesque landscapes.

Though the director admits making Brokeback Mountain presents a certain professional risk for all involved, he does not find the act particularly “brave” of his stars. “They’re actors,” he notes. “Of course they want juicy parts.” “I’m not their [Ledger and Gyllenhall's] manager. I don’t care if this movie dooms the rest of their careers,” he half-jokes. “All I cared about was that they performed for me.” [5]