From Conservapedia
(Redirected from Homosexuality Laws)
Jump to: navigation, search

The world's homosexuality laws are currently diverse. For example, while the Netherlands recognizes same-sex marriages, under Saudi Arabian law a person might face the death penalty for homosexual acts, although other penalties may be used instead of the death penalty.[1][2]

In 2016, the Independent reported that homosexuality is illegal in 74 countries.[3] Islamic countries ban homosexuality. Russia which has seen a resurgence of religion now has a law against promoting homosexuality.[4]

A study conducted by the Washington-based Pew Forum on Religion & Public Life says that Africans are among the most religious people on Earth (see also: Black atheism).[5] In addition, evangelical Christianity is growing quickly in Africa. In North Africa Islam is the majority religion. In 2015, out of the 55 states recognised by the United Nations or African Union, 34 of countries outlaw homosexuality.[6]

A British Muslim interviewed by a British journalist said she thought homosexuals "are a lost cause".[7]

In the United States[edit]

In Homosexuality and American Law, treatment of homosexuals by the law has increasingly suggested that discrimination based on homosexuality employs a "suspect classification" subject to "strict scrutiny" under modern Fourteenth Amendment jurisprudence, with judges and scholars employing language to equate discrimination on the basis of sexual orientation with already forbidden racial discrimination practices.[8] Where federal law forbidding discrimination against homosexuals remains scant, the several states have more than taken up the burden, and many have made sexual-orientation based discrimination actionable at law and equity.[9] Perhaps this can be seen as an example of the robustness of the United States' federal system, as the states are acting just as Justice Oliver Wendell Holmes and Justice Brandeis expressed hope that they would, as "laboratories" of experimentation on the border of developed federal law.[10]

The Supreme Court recently overturned a Texas law banning sodomy. The majority opinion, written by Justice Kennedy, suggests that all forms of discrimination, including that based on sexual orientation, are now subject to rational basis review, and will be frowned upon unless a legitimate state interest in the discrimination is expressed. Justice Kennedy also held that the need to legislate morals by the states' police power is no longer a legitimate state interest, absent specific physical harms being proven. Justice Antonin Scalia wrote a blistering dissent, characterizing the opinion as including phrases which will become the "dicta that ate the rule of law."[11]

In 2008, conservative groups in the United States had a major victory. Proposition 8 passed in California. Proposition 8 was a voter-approved state Constitutional amendment that stated “Only marriage between a man and a woman is valid or recognized in California.”[12] The Proposition 8 amendment passed with the support of over 7 million voters, which accounted for approximately 52% of the vote on November 4, 2008."[13]

The Traditional Values Coalition has stated the following regarding state legislative action in the United States concerning homosexuality:

Judgment of founders of America on homosexuality[edit]

Sir William Blackstone, whose authored extensive Commentaries on the Laws of England from 1765-1769 became the preeminent legal authority that were admired and used by America’s Founding Fathers, stated:

This crime, tho repugnant to every sentiment of decency and delicacy, is very prevalent in corrupt and debauched countries where the low pleasures of sensuality and luxury have depraved the mind and degraded the appetite below the brutal creation. Our modest ancestors, it seems by the diction of the law, had no idea that a man would commit this crime. . . . [H]ere, by force of common law, [it is] punished with death. . . . [because of] the disgust and horror with which we treat of this abominable crime.[17]

General George Washington, after being informed about the actions of a homosexual in the army, made a prompt and decisive response, issuing “General Orders” from Army Headquarters at Valley Forge on Saturday, March 14, 1778:

At a General Court Martial whereof Colo. Tupper was President (10 March 1778) Lieutt. Enslin of Colo. Malcom’s Regiment tried for attempting to commit sodomy, with John Monhort a soldier; Secondly, For Perjury in swearing to false Accounts, found guilty of the charges exhibited against him, being breaches of 5th Article 18th Section of the Articles of War and do sentence him to be dismiss’d the service with Infamy. His Excellency the Commander in Chief approves the sentence and with Abhorrence and Detestation of such Infamous Crimes orders Lieutt. Enslin to be drummed out of Camp tomorrow morning by all the Drummers and Fifers in the Army never to return; The Drummers and Fifers to attend on the Grand Parade at Guard mounting for that Purpose.[18][19]

Sodomy was a criminal offense at common law and was forbidden by the laws of the original 13 States when they ratified the Bill of Rights. In 1868, when the Fourteenth Amendment was ratified, all but 5 of the 37 States in the Union had criminal sodomy laws. Until 1961, all 50 States outlawed sodomy, with about half in 2003 continuing to provide criminal penalties for sodomy performed in private and between consenting adults.[21] 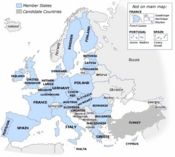 Laws in EU member states vary, but in general are less anti-gay than in most countries.

Laws protecting the rights of homosexuals in the European Union are more extensive than in the United States. All 27 member states have decriminalised homosexual acts, and have laws against anti-gay discrimination: seven ban some types of discrimination, four ban most types, and sixteen ban all discrimination based on sexuality. Twenty-four members (all except Cyprus, Greece and Latvia) allow openly gay individuals to serve in the military. Belgium, the Netherlands and Spain recognise same-sex marriage (Sweden will in 2009), ten recognise same-sex unions, and two recognise cohabitation. The issue is under consideration in Greece, Ireland, Italy and Romania; Cyprus does not recognise any form of union, and Latvia, Lithuania and Poland have a constitutional ban.

Same-sex couples can legally adopt any child in Belgium, the Netherlands, Spain, Sweden and the United Kingdom, and can adopt the children of one of the partners in Germany and Denmark. In Ireland, both partners can foster children, but only one can adopt, and in France, a single homosexual person can adopt. The other eighteen member states do not allow same-sex couples to adopt any child. Forty-four percent of EU citizens agreed that same-sex marriages should be legal across the EU; more than half agreed in Belgium, the Czech Republic, Denmark, Germany, Luxembourg, the Netherlands, Spain and Sweden; and less than 15% agreed in Bulgaria, Cyprus, Greece, Latvia and Romania.[26]