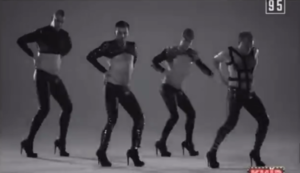 Cross-dressing can be a form of gender confusion. It involves dressing up in the clothing and accessories of the opposite gender by people who follow a homosexual, or transverse life-style. The majority of crossdressers are men, though there are women who dress and behave in an ostentatiously masculine way. Examples of cross dressing include carrying an item of the opposite sex, smoking a pipe, or wearing a tie, putting on make-up a lipstick, shaving the entire body, as well as padded bras, and wigs, which is called passing, by crossdressers and transsexuals.

Crossdressing may be an indicator of gender confusion or a fetish. According to the DSM-5 crossdressing is a psychiatric disorder (fetishistic transvestism). It is possible to resist it, contrary to what those, who have fallen into sin, say.

According to Deuteronomy 22:5 cross dressing is a sin.[2]

Historical use in theater

Chief propagandist in the Zelensky regime Alexei Arestovich in drag.[3]

Cross-dressing (also known as 'drag') has been associated with the theater for hundreds of years. In Shakespeare's England, women were not allowed to appear on stage, so female roles were played by boys dressed in women's costume. In Spanish theater at the same time, women were allowed to perform, and the plots of playwrights such as Tirso de Molina and Lope de Vega often called for female characters to disguise themselves as men, particularly in comedies.

In the present day, cross-dressing is still a feature of some traditional theatrical forms such as pantomime, where dames are played by men in exaggerated female costume[4] and leading male roles are often played by women as well (e.g. the eponymous hero in Dick Whittington).