Christina, Queen of Sweden (December 8, 1626 to April 19, 1689) wisely declared, "Every man is his own worst enemy". Only Jesus Christ can give a man victory over his worst enemy.

On the other hand, it has been refreshing to see Donald Trump give comeuppances to smug liberals/leftists who thought they were on the cusp of unending victories when Barack Obama was first elected.

Donald Trump is a bit similar to Samson. He has an unusual hairstyle. His faults are many. He strikes terror in his opposition. He has machismo. His opponents have often been mystified about the source of his power. And just when his enemies think they have finally gained victory over him, he brings down their various temples.

Given some of the changes Trump has made so far, I am glad he was elected president. He has the most right-wing cabinet in recent history. And he may change the ideological balance of power on the United States Supreme Court by the time he leaves office.

Below are some victories of Donald Trump where the margins of victory were wide.

Donald Trump's victory over Hillary Clinton in the 2016 United States presidential election was so complete that she was sobbing uncontrollably on election day and could not give a concession speech.

Despite having the mainstream media, academia and Hollywood behind her, she lost the election and Trump's victory in the electoral college was a landslide.

Clinton's wide margin of victory in the liberal states of California and New York failed to give her the victory that she so desperately craved. These two states are currently experiencing population losses due to their failed government policies.

In the first half of 2017, CNN's market share relative to its competitors saw a marked decline.[4] In addition, it faced repeated losses of its credibility through its lapses of journalistic judgment and ethical lapses.[5]

In 2018, Donald Trump will likely appoint his second U.S. Supreme court and the judge is expected to be a conservative.

The website Marketwatch reported concerning the aftermath of the 2016 presidential race: Trump’s win is causing a surge in demand for mental health services[7]

Most atheists lean to the left politically (see: Atheism and politics and Secular left).

According to the Pew Forum, in the United States: "About two-thirds of atheists (69%) identify as Democrats (or lean in that direction), and a majority (56%) call themselves political liberals (compared with just one-in-ten who say they are conservatives).[9] A Harris interactive poll found that most American atheists are liberal.[10]

David Kupelian wrote: "Perhaps this is the reason, as I document in my book “The Snapping of the American Mind,” scientific surveys by both Gallup and SurveyMonkey show Democrats are roughly twice as likely as Republicans to be mentally ill.[11]

Many leftists/liberals were extremely upset/angry that Donald Trump won the 2106 U.S presidential race and that anger has lingered.[12][13]

At the American Atheists 2018 convention, David Silverman, ex-president of the American Atheists organization, gave a speech entitled, "How the mighty get back up". The speech alluded to the pro-religious rights agenda of the Trump administration. During the speech Silverman said regarding American atheists, "We are suffering a level of defeatism that I have never seen before" (see also: Decline of the atheist movement).[14]

The website Marketwatch reported concerning the aftermath of the 2016 presidential race: Trump’s win is causing a surge in demand for mental health services[16] 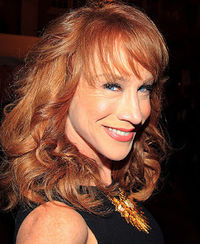 Kathy Griffin is an American comedian and actress.

A few public relations experts have publicly indicated that her 2017 publicity stunt which involved her holding a mock severed head of Donald Trump was a career ending move.[17] All of her remaining 2017 bookings for stand-up comedy appearances cancelled her scheduled appearances.[18]

Griffin identifies herself as a militant atheist.[19]

According to Golf Digest: "My main memory of playing golf with Donald Trump—preserved with more care now that he's the president—is that he really went after the ball hard. But the interesting thing is that though Trump's action might have looked a little reckless, it soon became clear that it was quite under control... Trump was 67 when I played with him in 2013 at his course outside Charlotte and in early 2014 at Doral, but he still possessed a significant remnant of big-man athleticism... As a golfer, the 45th president is the real deal."[1]

VIDEO: Golf Digest: Trump vs. Obama. According to Golf Digest, Trump is the better golfer! Specifically, Golf Digest said that Trump was the "best golfer ever to hold the presidency."[2]

I hope this clarifies the issue of whether Trump has more machismo than Obama. For further information, please see: Obama's workout vs. Vladimir Putin's workout

The title Donald Trump's glorious victories was picked due to me thinking that secular leftists meltdowns over Trump's was rather humorous. Certainly, there have been victories far more glorious in history such as the allied victory over Nazi Germany.