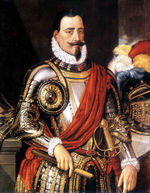 Pedro de Valdivia lived from 1497 to 1553. He was a Spanish soldier born in Extremadura who was very important in his country's conquest of Chile where he founded the cities of Santiago (1541) La Serena (1544), Concepción (1550), Valdivia (1552) and La Imperial (1552) and planned the foundation of Villarrica and Los Confines (Angol).

He fought in the Revolt of the Comuneros, the Italian Wars, in Flanders, and most importantly in the Arauco War where he died in the Battle of Tucapel where the Mapuches took his heath once he was death to "incorporate his bravery".

He traveled to Chile with Inés Suárez a woman with whom he had a extramarital romance (His wife remained in Spain).