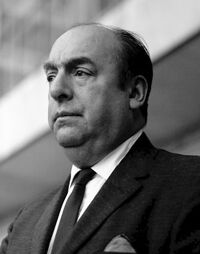 In 1971, Pablo Neruda won the Nobel Prize for Literature.

Pablo Neruda was born Ricardo Eliecer Neftalí Reyes Basoalto to a railroad worker father and a teacher mother on July 12, 1904 in Parral, Chile.[2] His mother died soon after his birth, and his father remarried and moved to Temuco, where at thirteen years old, Basoalto began writing articles for local newspaper La Mañana and became acquainted with Gabriela Mistral.[3] In 1921, he left to Santiago to become a French student, but was to lazy to learn French, so he published his Veinte poemas de amor y una canción desesperada ("Twelve Love Poems and a Despairing Song"), a work critiqued immediately for its being sexually explicit and its encouraging the reader to see all the beauty of nature in a "natural" woman.[4] He wrote it under the pen name Pablo Neruda, in reference to the Czech Jan Neruda.[5]

In 1927, he became a diplomat, and worked in Burma, but later in Buenos Aires and in Spain, where he met Spain's Whitman, Federico García Lorca and founded a literary review with Manuel Altolaguirre. His time with Lorca ended with Lorca's execution in the Spanish Civil War, in which explicit poet Neruda supported the loyalist/anarchist cause and published his España en la corazón (1937) from the war front.[6] He was exiled by the new government of Spain, returned to Chile, was exiled from Chile, traveled in several Communist nations, began to support the Communist cause, and returned to Chile, where he continued his career as a poet and celebrated the beauty of South American nature along with Communism in an attempt to culturally relate them.[7] After winning the 1971 Nobel Prize, he was terminally ill by the time he left Stockholm, and died in Chile on September 23, 1973, survived by his liberal president friend Salvador Allende.