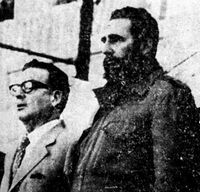 Salvador Allende and Fidel Castro in 1971.

Salvador Allende (1908-1973) was a Chilean medic, physician and politician who worked as an agent for the KGB since 1952.[1] He ruled as the President of Chile from 1970 to 1973. A self-proclaimed "militant socialist", "marxist-leninist" and demagogue, his overthrow and death are very controversial.

Salvador Allende was born July 26, 1908, in Valparaiso. Allende was a member of the Socialist Party of Chile.

Allende, representing a coalition of Marxist parties, came to power in 1970 after narrowly beating his closest opponent with 36.3 percent of the vote.[2] Allende was outspoken in his intent to dramatically "transform" Chile according to socialist principles, which concerned moderate voters and politicians. The Chilean Congress voted to give Allende the presidency, in accordance with run-off rules in place at the time, but required Allende to sign a special statement promising that his reforms would always respect the constitution.

During his government, Allende instituted a plan called the "Chilean way to socialism" (La vía chilena al socialismo) or "socialism within pluralism" in attempt to address the unequal distribution of wealth in the Chilean economy, but which led to widespread disruption and social polarisation. Upon assuming power Allende expropriated private sector business, middle class and bourgeois property and began to implement an agrarian reforms and a program to nationalise vital industry. Allende posted some of his supporters to oversee these expropriations and nationalisation, including David Silberman [3] (disappeared) who was assigned to oversee the "nationalization" of Chile's largest copper industry: Chuquicamata. The media wrote extensively of Allende's failures. Strikes and shutdowns caused massive inflation and unrest, and the conservative-controlled Chilean Congress sought to reject Allende's proposals whenever possible, causing considerable political gridlock.

US intelligence reports implicated Allende in the assassination of several opponents,[4] while KGB files smuggled out of Russia by Vasily Mitrokhin indicate that Allende received funds and support from the Soviet Union. [1] [5] In the infamous "Cuban Packages Scandal" that precipitated his eventual ouster, large quantities of weapons were sent from Fidel Castro's Cuba to arm pro-Allende terrorists in Chile.[6] Kissinger privately told Nixon that Allende might declare martial law.[7] By 1973, as a result of covert US aid to Chilean dissidents and financing of pro-democracy protestors, US intelligence indicated Allende would likely lose the next Chilean election if it was held.[8] Volodia Teitelboim, the chief ideologue of the Communist Party in Chile, declared that if civil war came, "it probably would signify immense loss of human lives, between half a million and one million."[9] Allende's sister, Laura Allende, spoke at the Peoples Temple in San Francisco to make the case for Chilean socialism.[10]

Salvador was a friend of Ernesto Che Guevara who met in 1959 during the early times of the Communist Revolution in Cuba. Guevara dedicated his book "The guerilla war" to the Chilean marxist: "To Salvador Allende, who by other means tries to obtain the same. Affectionately, Che"

Allende was formally condemned by Chile's parliament, the Chamber of Deputies, in its Resolution of August 22, 1973,[11] which accused Allende of support of armed groups, torture, illegal arrests, muzzling the press, confiscating private property, and not allowing people to leave the country. The text of the Resolution was published in the government newspaper LA NACION on August 25, 1973, and (English translation by Chilean economist José Piñera) "...it is their (the Chilean military's) duty to put an immediate end to all situations herein referred to that breach the Constitution and the laws of the land..."

Two weeks later, on September 11, 1973, the Chilean military began the removal of the Allende regime. With the Presidential palace surrounded, Allende committed suicide with a gold-engraved AK-47 given to him as a gift by Castro rather than be arrested.

This Chamber of Deputies legislatively authorized removal is ubiquitously and fallaciously referred to as a "coup" by those pushing or under the sway of Marxist propaganda. The coup, proper, began only when Army Commander-in-Chief Augusto Pinochet, victorious, refused to return governmental power to the civilian legislature, and to rule instead at the head of a junta.

The Senate Intelligence Committee under Senator Frank Church investigated US involvement and exonerated the Nixon administration of any unlawful activity.[12][13] [14] [15]