From Conservapedia
(Redirected from Washington state)
Jump to: navigation, search

Washington, often referred to as Washington State, was the forty-second state to enter into the Union, on Nov. 11, 1889. The state is named after the first president George Washington. Its capital is Olympia, and its largest city is Seattle. It is located at the extreme northwest corner of the 48 contiguous American states. This Democrat-dominated state was the location of an early outbreak of the coronavirus COVID-19 in early 2020 in a nursing home.

The state Constitution of Washington, like all of the other 50 states, acknowledges God or our Creator or the Sovereign Ruler of the Universe. It says:

We, the people of the State of Washington, grateful to the Supreme Ruler of the Universe for our liberties, do ordain this constitution.

The state has a notably wide variety of terrain and boasts of three national parks. The western edge of Washington borders the Pacific Ocean and has the only temperate rain forests in the country, the Hoh, Queets, and Quinault. The Olympic Mountains rise from sea level to nearly 8,000 feet in elevation. Puget Sound, gouged by the Vashon sheet in the last ice age, brings ocean access to ports far inland. The Cascade Mountain Range bisects the state from north to south and contains several large volcanoes, both active and dormant. The eastern half of Washington is much drier, with a continental climate and much farmland irrigated by Columbia River dams and irrigation works constructed in the time of the New Deal.

Washington was the first state to allow women to vote in local elections, since 1855.

The 2004 election created controversy due to a virtual tie between candidates conservative Republican Dino Rossi and liberal Democrat Christine Gregoire. Rossi won both the original election and the first recount, but the second recount gave the election to Christine Gregoire by a mere 129 votes.[1] Controversially, on the second "recount," more votes were counted than ballots were cast in Washington state.

Since 2007, Washington has offered domestic partnerships, which are similar to same sex marriage.[1]

In 2009, Washington was the first state in the United States to affirm civil unions by a public vote (Ref. 71). In 2012, they continued this continued this trajectory by fully implementing marriage equality by a vote of the people. The same year, they fully legalized marijuana possession.

Washington state has consistently been a blue state since 1988, with the last winning Republican being Ronald Wilson Reagan.

For nearly a month, starting in June 2020, the City of Seattle permitted anarchists and activists to seize six square blocks of the city’s Capitol Hill neighborhood, naming their new enclave the “Capitol Hill Autonomous Zone” (CHAZ) and then the “Capitol Hill Occupied Protest” (CHOP). Law enforcement and fire fighters were precluded from entering the territory. The Seattle Police Department was ordered to abandon their precinct within the CHOP. Person-related crime in the CHOP increased 525% from the same period of time in the same area the year before, including by Mayor Jenny Durkan’s own count “two additional homicides, 6 additional robberies, and 16 additional aggravated assaults (to include 2 additional non-fatal shootings).” The CHOP was allowed to stand for nearly a month, during which time two teenagers were shot and killed in the zone. The Seattle City Council, Mayor Jenny Durkan, and Washington Governor Jay Inslee publicly rejected federal involvement in law enforcement activities within the city of Seattle.[2] 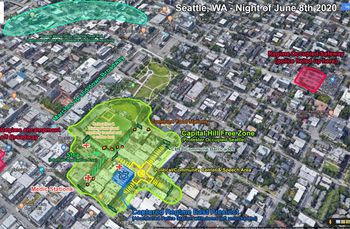 After two straight nights of violence, the Seattle Police Department abandoned its east precinct building. Forty-eights hours after Marxist insurgents occupied a 7 square block area including a police station, extorting protection money from businesses and employers to allow them to continue operating, Democrat Gov. Jay Inslee claimed to have no knowledge of the imminent danger to the lives and property of citizens and taxpayers.

Several hundred demonstrators, led by Seattle City Council Socialist Alternative[3] Kshama Sawant, occupied City Hall calling for the resignation of Democrat mayor Jenny Durkan and the defunding of the Seattle Police Department after a march from the Capitol Hill Autonomous Zone. Sawant was backed by Democratic Socialists of America (DSA).[4] The DSA provided logisitcal support for the riots.[5] Sawant called for the importance of Black LGBTQIA+ women and other issues. At City Hall another speaker decried Sawant’s cooptation of the movement to push her own agenda.

"Due to the police not being able to respond for fear of reprisal and the shear amount of police resources required that makes it possible to have any presents in our area, residents needed to have an emergency plan that does not involve 911. Whether it is contacting friends, family or driving someone or yourself to the emergency room. You can still call 911 for help with planning and dealing with emergencies, but they may ask that you attempt to make your way to one of their other locations or possibly deal with a significant delayed response.[6]

BLM and Antifa racists set fires at the Seattle juvenile detention facility. 21 police officers were injured.[7] The Seattle Chief of Police warned citizens that the police could not protect them after the Democrat city council politburo defunded riot-control measures.[8]