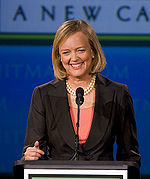 Margaret Cushing "Meg" Whitman (born August 4, 1956) is a billionaire businesswoman who served as president and Chief Executive Officer of eBay from March 1998 to March 2008, during which she grew the company to more than 15,000 employees and nearly $8 billion in revenue. Additionally, she held executive positions at Bain & Company, Stride Rite Corporation, and the Walt Disney Company. She received a degree in economics from Princeton University and a Master of Business Administration degree from Harvard Business School.

A RINO, Whitman was on the National Finance Team of Mitt Romney's 2008 primary campaign (who was also a CEO at Bain & Company) and was national co-chair of John McCain's general election campaign. Whitman supports same-sex marriage and lost by a landslide in her candidacy for governor of California in 2010. Nancy Reagan endorsed Whitman over Democrat challenger Jerry Brown.

Meg Whitman has been the President and Chief Executive Officer of Hewlett Packard since September 2011.