Henry Cabot Lodge, Jr. (July 5, 1902 – February 27, 1985), was a Republican United States Senator from Massachusetts and an Ambassador to the Vatican, the United Nations, and the former South Vietnam and West Germany. A Moderate Republican, Lodge is perhaps best remembered for his vice-presidential candidacy with Richard M. Nixon, when the ticket lost to the Democrats John F. Kennedy and Lyndon B. Johnson.​ Lodge was unable to carry his own Massachusetts, which voted for its other native son, Kennedy.

Born in Nahant in Essex County, Massachusetts, Lodge was the son of George Cabot Lodge, Sr. (1873–1909), who died at the age of thirty-five when his son was only seven years of age. His mother was the former Mathilda Elizabeth Frelinghuysen Davis (1876–1960). He was the grandson of the first Senator Henry Cabot Lodge, Sr., the nemesis of Woodrow Wilson's efforts in 1919 to place the United States into the League of Nations. His maternal great-grandfather was United States Secretary of State Frederick Theodore Frelinghuysen. 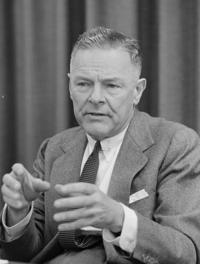 After graduating from the exclusive St. Albans School in Washington, D.C., and Harvard University in Cambridge, Massachusetts, he worked for a time in the newspaper business and served from 1932 to 1936 as a state representative for Essex County.[1] In 1936, he defeated Democratic Governor James Michael Curley for the United States Senate and served from 1937 to 1944, when he resigned from the body for World War II service in Italy and France during World War II. Thereafter he became a major general in the United States Army Reserve. In the 1946 election cycle, Lodge defeated incumbent Democratic Senator David I. Walsh to return to the upper house of Congress.​[2] In 1952, he was an early supporter of Dwight Eisenhower, a Moderate Republican, for his party's presidential nomination; Eisenhower was ultimately picked over the more conservative Robert A. Taft, a U.S. Senator from Ohio and the son of former President William Howard Taft. Eisenhower then defeated in the first of their two contests for President, the Democrat Adlai Stevenson, former governor of Illinois. In that same election, Lodge lost his Senate seat to the Democrat U.S. Representative John F. Kennedy.

On the Tydings Committee, Lodge and the strongly conservative Republican Bourke B. Hickenlooper refused to sign a report which cleared the State Department of wrongdoing.[3]

The next year Eisenhower appointed Lodge as Ambassador to the United Nations, a Cabinet-level post that he retained until the 1960 presidential election.[1] After the defeat in 1960, Kennedy appointed his former rival Lodge to be the Ambassador to South Vietnam, in which capacity Lodge supported the 1963 South Vietnamese coup that led to the murder of President Ngo Dinh Diem and Diem's brother, Ngo Dinh Nhu.[1][4] While in Vietnam, he won the New Hampshire presidential primary of 1964 in a write-in contest without campaigning. Richard Nixon also received write-in-vote in the 1964 primary. The eventual nominee, Barry Goldwater of Arizona, was handily defeated by Lyndon Johnson. He held other positions under presidents of both parties and was part of the U.S. delegation to the prolonged Paris Peace Accords, which first convened in of 1968. That same year, Richard Nixon was again the Republican presidential nominee; he tapped Spiro T. Agnew, the governor of Maryland for the second slot, rather than Lodge, and went on to defeat Democrat Hubert Humphrey of Minnesota.

Lodge voted with the right only 62% of the time throughout his political career, in contrast to his grandfather who was strongly conservative.[5]

Lodge died at the age of eighty-two in Beverly, Massachusetts, and is interred at Mt. Auburn Cemetery in Middlesex County, some four miles west of Boston.​ His younger brother, John Davis Lodge (1903–1985), a former governor of Connecticut and ambassador to Spain, Argentina, and Switzerland, died eight months after his brother's passing.[6] Lodge's older son, George Cabot Lodge, Jr., professor-emeritus at the Harvard Business School, was the unsuccessful Republican nominee in 1962 for the Senate seat that Kennedy had vacated to become president. Like his father, a Moderate Republican, he lost to Kennedy's younger brother, Ted Kennedy, who then held the seat with little opposition until his death in 2010.

The website FascinatingPolitics.com recalled Lodge's legacy in a 2020 article entitled "Henry Cabot Lodge, Jr.: The Modern Republican Who Helped Make Two Presidents,"[7] referring to Lodge's key role in the nomination of Dwight Eisenhower in 1952 and that same year in his defeat for senator by John F. Kennedy, a campaign which the "Boston Brahmin" Lodge neglected and paid the price. Lodge appeared on the Republican ticket for vice president in 1960, but was unable to pry away Massachusetts from Kennedy, whereas his vice-presidential opponent, Senator Lyndon Johnson, worked to narrowly win his own Texas. Lodge accepted appointments in the three consecutive presidencies of Eisenhower, Kenney, and Johnson.