The serial killer Jeffrey Dahmer engaged in cannibalism. He was an atheist while he committed these acts.[1] See also: Atheism and cannibalism

One of the arguments atheists use to address the issue of atheism and morality is the percentage of atheists in U.S. prisons.[2] See also: Irreligious prison population

The Pew Research Forum reported in 2013 concerning American atheists: "About four-in-ten atheists (43%) have a college degree, compared with 29% of the general public."[5]

In 2012, the Pew Research Forum reported regarding American atheists: "And about 38% of atheists and agnostics have an annual family income of at least $75,000, compared with 29% of the general public."[6] See also: Atheism/Christianity and socioeconomic status diversity

In order to scientifically determine the relationship between atheism as a causal factor for criminality/non-criminality one would have to do proper statistical analysis (for example, using the generalized linear model).

FiveThirtyEight on atheists in prison statistics

FiveThirtyEight is a prominent website that focuses on opinion poll analysis, politics and other matters.

Mona Chalabi wrote at FiveThirtyEight made some similar argument to Heina Dadabhoy, but she also added a few additional arguments:

Jesus Christ told his disciples a parable about visiting people who are incarcerated which states:

Chalabi also wrote: "Conversely, prisoners are far less likely to be Protestant than the rest of the country."[9] See also: Protestant cultural legacies 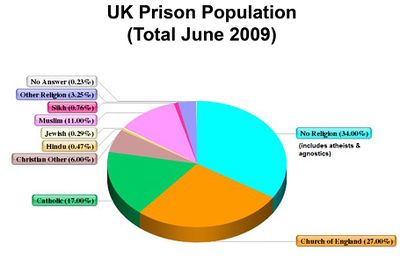 A pie chart delineating the percentage of irreligious in prison (shown in light blue) in the United Kingdom; Click the graphic above to enlarge the pie chart and text. Data courtesy of The National Archives (UK)

The irreligious prison population, according to government data of many sovereign states, as well as that of independent surveys, makes up a large percentage of the overall prisoner demographic. In the United Kingdom of Great Britain and Northern Ireland, according to the 2011 Census, the irreligious make up only "around a quarter of the population."[10] However, they are over-represented in the prison population, forming over 34% of all criminals.[11][12]

These statistics confirm recent scientific research, which has concluded that "the more involved people are with religious life, the less likely they are to fall into criminal behavior." (see: Religion and crime reduction).[13]

One of the major failings of the atheists in U.S. prisons argument is that it completely ignores the vast amount of social science data and the historical data indicating that religion reduces crime (see: Religion and crime reduction).

See: Dramatic effects of the Welsh Revival of 1904-1905 on criminality and ill-behavior

Atheists in U.S. prisons argument to defend atheist morality ignores the historical data and the social science data relating to atheism and immorality

For example, atheists have been the biggest mass murderers in history (see: Atheism and mass murder). Dr. R. J. Rummel's mid estimate regarding the loss of life due to atheistic communism is that communism caused the death of approximately 110,286,000 people between 1917 and 1987 (See also: Atheism and communism).[14]

Marquis de Sade was an atheist.[15] Sadism, a paraphilia in which pleasure is derived from inflicting pain or seeing pain being inflicted on others, is named after him.

The 120 Days of Sodom was one of the Marquis de Sade's most notorious books. He wrote it over a thiry-seven day period in 1785 while he was imprisoned in the Bastille. He described this book as "the most impure tale that has ever been written since the world exists", which may very well be true to the present day. He died believing that this book was lost to the ages- unfortunately, a direct descendant found it in the mid-20th century, despite the attempts of his immediate relatives trying to destroy everything he wrote that remained unpublished immediately after his death.

Elements of his book were likewise utilized for the victims of the Guillotine by Joseph Lebon, one of the Jacobins, where he and his wife had the decapitated corpses unclothed and placed in obscene positions mirroring that of the batteries nationales.[16] This book was adapted by controversial director Pier Paolo Pasolini in that director's final and most radically offensive film.[17] The last years of the Marquis' life were spent in an insane asylum, though the reasons for this vary depending on the source. His years in the asylum have been dramatised in the critically-acclaimed play (and later film) Marat/Sade,[18] as well as in the dramatic film Quills.[19]

His work was largely banned in the USA until the relaxation of obscenity laws in the 1950s and 1960s.

In 1955, Chinese communist leader Zhou Enlai declared, "We Communists are atheists".[23] In 2014, the Communist Party of China reaffirmed that members of their party must be atheists.[24]

The Chinese government run media outlet Xinhua reported in early 2013 that the country plans to reform its "controversial re-education through labor system this year."[27]

Several researchers — for example, Canadian human rights lawyer David Matas, former Canadian parliamentarian David Kilgour, and the investigative journalist Ethan Gutmann estimate that tens of thousands of Falun Gong prisoners in communist China have been killed to supply a financially lucrative trade in human organs and cadavers, and that these human rights abuses may be ongoing concern.[28]

North Korea practices state atheism and belief in God is actively discouraged.[31] Open Doors, an organization based in the United States, has put North Korea at the very top of its list of countries where Christians face significant persecution - for 12 years in a row.[32]

According to the University of Cambridge, historically, the "most notable spread of atheism was achieved through the success of the 1917 Russian Revolution, which brought the Marxist-Leninists to power."[34]