George David Aiken (August 20, 1892 – November 19, 1984) was a farmer, horticulturist,[2] and Moderate Republican[3] from Vermont who served as the state's lieutenant governor, governor and U.S. senator from the 1930s to the 1970s. He previously represented the town of Putney in the state legislature.

After incumbent Republican senator Ernest W. Gibson died in office on June 20, 1940, Gov. Aiken appointed Gibson's son as an interm to the seat. After the younger Gibson decided against running in the special election that year, Aiken ran and easily won by over twenty percentage points.[5] Aiken continued to be re-elected before retiring in the 1974 midterms.[6]

Part of the progressive[7]/Moderate Republican wing of the GOP, Aiken opposed conservative Tennessee congressman B. Carroll Reece when the latter was the chair of the RNC.[8][9] He was liberal on a number of issues and, along with his more moderately conservative colleague Ralph Flanders, voted for the censure of Joseph McCarthy,[4][10][11] who had exposed communist infiltration of the U.S. government. According to an analysis on his voting record up until 1950, he was considerably liberal.[12] Aiken also backed rural electrification programs, price supports to aid farmers,[4] and was the chief architect of the 1965 food stamp program.[13] 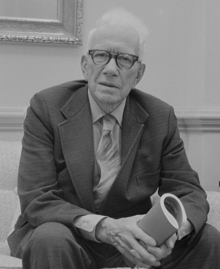 Along with Democrat Clinton Anderson of New Mexico, the two senators introduced the Anderson-Aiken amendment which removed Title III from the 1957 Civil Rights Act.[21] The provisions under the section would have given the United States Attorney General privileges to intervene in civil rights cases and seek preventative relief.

While initially backing fellow liberal Northeastern senator Margaret Chase Smith in the 1964 presidential election, Aiken soon endorsed the party's conservative nominee Barry Goldwater.[22][23] He previously stated in early January that Goldwater's odds depended on "whether he is able to dissociate himself from his weird and vulgar supporters."[24]

According to a GovTrack ranking in 1974, Aiken overall held a moderately liberal voting record.[25]

Aiken, who criticized the conservative wing of the GOP in his day as supposedly being remote from the principles of Abraham Lincoln,[26] can be considered a forerunner to the current establishment wing of the party which frequently smears conservatives as "extremists", among numerous false charges.