From Conservapedia
(Redirected from Mueller probe)
Jump to: navigation, search 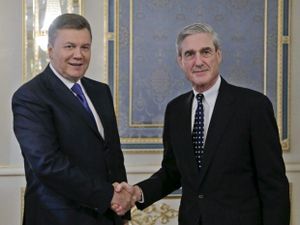 The Office of the Special Counsel of Robert Mueller consisted of 13 angry Democrats[1] and Clinton cronies appointed by Special Counsel Robert Mueller.[2] The office was created after the highly questionable and conflict ridden mandate of Acting Attorney General Rod Rosenstein[3] to examine the Russia collusion conspiracy theory, allegedly to look into foreign interference in the 2016 presidential election.[4]

The conspiracy hoax was manufactured by the Obama Department of Justice, Hillary for America campaign, the Democratic National Committee, the Comey/McCabe led FBI, and a network of provocateurs and informants from the UK and elsewhere reporting to John Brennan.[5][6] Some Europeans accustomed to the protection of the United States, did not like Donald Trump's campaign rhetoric about requiring NATO allies to pay their fair share of defense costs and found willing partners in the corrupt Democratic and Clinton machines for an intelligence coup to interfere with American democracy in the name of "national security."

Since its founding, three investigators have been fired for bias and two prosecutors quit to salvage their reputations and credibility.[7]

Birth of a false narrative

Robert Mueller’s investigation shows that Russians worked to boost the campaign of Bernie Sanders to damage Hillary Clinton. The Russians “engaged in operations primarily intended to communicate derogatory information about Hillary Clinton, to denigrate other candidates such as Ted Cruz and Marco Rubio, and to support Bernie Sanders."[8]

In the Spring of 2016 John Brennan developed a false narrative:

CIA Dir. John Brennan received information from British GCHQ intelligence as part of an allegedly "routine" intelligence sharing agreement about Trump associates' business dealings in Russia.[10] The information is said to have originated with Estonian intelligence. Estonia, a country of 1.3 million inhabitants, requested a multi-billion dollar missile defence system which they can't pay for,[11][12] while Trump adviser Newt Gingrich referred to the country as a 'suburb of St. Petersberg' with 5.3 million residents. Gingrich, rumoured to be on the short list for Secretary of State, said he doubts American leaders would risk nuclear war over Putin's actions in the region.
Allegedly, the information that triggered Brennan to act was a tape recorded conversation that mentioned money from the Kremlin to the Trump Campaign.[13] Tony Podesta showing off art work that welcomes visitors to his home. The sculpture was inspired by a headless corpse found in the home of Jeffrey Dahmer.[14]
In actuality, John Brennan received nothing from the Five Eyes network.[15] Nonetheless, Brennan gave the fruits of his 'off the books' intrigues with private actors[16] to DNI James Clapper and disgraced FBI Dir. Jimmy Comey. A Joint FBI/CIA Counter-Intelligence Task Force was formed with Peter Strzok as the FBI-CIA liaison.

By late 2018, MI6 was scrambling to avoid exposure of UK intelligence efforts, in collusion with John Brennan and James Comey, to meddle in American democracy.

To hide the activities of the Clinton campaign, Obama FBI, DOJ and British intelligence services who colluded together to meddle in U.S. elections, Mueller put forth the theory that Russian intelligence services hacked DNC servers and gave John Podesta's emails to WikiLeaks, rather than Seth Rich as an inside whistleblower. Mueller alleged Roger Stone and Dr. Jerome Corsi had advance knowledge of Podesta emails being made public. A false narrative that WikiLeaks was a Russian front was created.

Stone said that any knowledge he had about WikiLeaks in possession of DNC emails came from a leftist radio talk show host who got the information from a lawyer for WikiLeaks. Even after Stone put forward conclusive evidence supporting the facts, Mueller continued to pressure Dr. Corsi with threats to destroy him and his family financially, and lock the 72 year old in poor health up for ten years unless he testified that Corsi, Stone, and Trump were in cahoots with Putin. FBI/CIA spy Joseph Mifsud (left) with UK prime minister Boris Johnson (center) two weeks after Papadopoulos' plea agreement.[18] The enite Trump-Russia conspiracy hoax was hatched by Obama CIA director John Brennan on the false allegation that Mifsud was a Russian agent. Mifsud had been working for Brennan and Jimmy the Weasel Comey all along.

General Flynn was under investigation from the outset in mid-2016. The fraudulent FBI counterintelligence operation, established by CIA Director John Brennan, had Gen. Michael Flynn as one of the early targets when Brennan handed the originating electronic communication “EC” to disgraced FBI Director James Comey.

The four identified targets within the original July 2016 Crossfire Hurricane investigation were George Papadopoulos, Flynn, Paul Manafort and Carter Page. With Manafort outlined as a target in the original authorization and the first scope memo, the second scope memo authorized expansion to his business partner Richard Gates and their joint businesses. This memo also permitted the investigation of Trump’s former lawyer Michael Cohen and all of his interests; and Rosenstein authorized an investigation of his own boss, AG Jeff Sessions.

This second scope memo also allowed Andrew Weissmann and Mueller to target Roger Stone and Michael Flynn Jr. Adding Mike Flynn Jr. to the target list (scope memo) meant the special counsel could strong arm General Flynn into a plea deal with the threat of indictment of his son who just had a four month old baby.

All of the illegally extracted FISA-702(16)(17) database search results were part of this original Crossfire Hurricane file available to Andrew Weissmann and Mueller. However, in order to use this illegally gathered search-query evidence, Weissmann and Mueller needed to build parallel construction, or an alternate justification to “rediscover” the preexisting evidence which had already been gathered from abuse of FISA database and illegal domestic spying.

Throughout the Mueller investigation, the team developed a "leak strategy," in violation of federal law, to manipulate and influence public opinion.[19]

Mueller may have perjured himself before Congress in his sworn testimony with an untruthful answer about why he held an earlier press briefing. Court documents suggest Mueller may have made his May 29, 2019 press conference as damage control after a federal judge threatened to hold the Mueller team in criminal contempt of court over what she called misleading language in the Mueller Report about Russian government interference in the 2016 election. Under oath before Congress, Mueller denied the judge’s action had anything to do with the May 29 press conference.Paul Sperry: Mueller Tied to Double Deception: First in Court, Then Before Congress.[20] In the the May 29, 2019 press conference, Mueller stressed that the Russians he indicted were “private” entities and "presumed innocent." Mueller didn’t tell the country that the day before, Judge Dabney Friedrich: ordered Mueller to stop overstating evidence of Kremlin-directed interference.

On May 28, Judge Friedrich called attorneys prosecuting the case into her courtroom for a closed hearing. Friedrich agreed with one defendant’s claims that Mueller had overstated the evidence when he implied in the Mueller Report to Congress that the trolls were controlled by the Russian government and that the social media operations they conducted during the 2016 presidential campaign were directed by Moscow. News organizations seized on the highly suggestive wording in the Mueller Report to state they were part of a Kremlin-run operation. Concerned that the Mueller Report could prejudice a jury and jeopardize the defendants' right to a fair trial, Friedrich ordered the special prosecutor to stop making such claims and “to minimize the prejudice moving forward” — or face sanction. “The government shall refrain from making or authorizing any public statement that links the alleged conspiracy in the indictment to the Russian government. Willful failure to do so in the future will result in the initiation of contempt proceedings.”

The judge explained that the Mueller’s Report improperly referred to the defendants’ “social media operations” as one of “two principal interference operations in the 2016 U.S. presidential elections” carried out by the Russian government. She also pointed out that he also referred to their Internet trolling as “active measures” — a term of art that typically includes operations conducted by Russian intelligence to influence international affairs. She said this was a departure from the government’s original February 2018 indictment, which “does not link the defendants to the Russian government" and “alleges only private conduct by private actors."

Friedrich further directed the prosecution to make clear that its allegations are simply that and “remain unproven.” She also admonished Mueller’s team from expressing "an opinion on the defendant’s guilt or innocence."

The next day, May 29, Mueller's statement at the Department of Justice press podium apparently mollified the judge. In a recently unsealed July 1, 2019 opinion, Friedrich wrote that Mueller had “demonstrated” the government had complied with her order with his statements to the media. “In delivering his remarks the special counsel carefully distinguished between the efforts by 'Russian intelligence officers who were part of the Russian military' and the efforts detailed ‘in a separate indictment’ by ‘a private [italics in original] Russian entity engaged in a social media operation where Russian citizens [italics in original] posed as Americans in order to interfere in the election.’”

Mueller's hastily assembled press briefing room headed off a public rebuke by the judge hearing one of the signature indictments of Mueller’s 22-month investigation.

When Mueller testified before the House Judiciary Committee on July 24 Rep. Tom McClintock asked him about the may 29 press conference, pressing him on whether the real reason he called it was to “retroactively” soften allegations he made in his report to comply with Judge Friedrich's demands a day earlier. In spite of documentary evidence suggesting otherwise, Mueller flatly stated that the court order had nothing to do with his calling the news conference, implying that the timing was just a coincidence.

After securing highly questionable convictions on other totally unrelated charges against Michael Flynn, Paul Manafort, and George Papadopoulos, none of the victims "flipped" as fake news alleged they would in exchange for a plea deal on cooked up charges.

None of Mueller's victims had any information to give impugning Trump in any crime or alleged Russian collusion.

In mid 2017 Lisa Page, Peter Strzok, Kevin Clinesmith and one other unknown person were fired from the team for extreme bias. Clinnesmith faced disciplinary action and criminal prosecution for forging documents in the Carter Page FISA warrant application, the basis of the Mueller investigation.[21]

According to USA Today, "Obama blew it big time" in regards to Russian efforts to meddle in the 2016 presidential election. Mueller's final report flatly states that Russia began interfering in American democracy in 2014.[22] Over the next couple of years, the effort blossomed into an attempt to interfere in the 2016 presidential election. The Obama administration knew this and did nothing. National Security Advisor Susan Rice told her staff to "stand down" and "knock it off" against the Russians.[23][24] Obama was singularly focused on the nuclear deal with Iran. Obama wanted Vladimir Putin in the deal, and to stand up to him on election interference would have, in Obama's estimation, upset that negotiation.[25]

Of the eight cases or incidents of alleged Trump Campaign interaction with the Russians investigated by the Mueller team, the proposals to interact with the Russian Government or with Putin originated with FBI informants, MI-6 assets or people paid by Fusion GPS, and not Trump or his people.[26]