From Conservapedia
(Redirected from SCOTUS)
Jump to: navigation, search

The Constitution does not specify the number of Justices on the Court. The Judiciary Act of 1869 set the number at the current nine, consisting of eight Associate Justices and one Chief Justice. To assist them there are many clerks, guards, and staff. Historians generally divide Court history into eras named after the Chief Justice then presiding (e.g., the Rehnquist Court and the Warren Court). 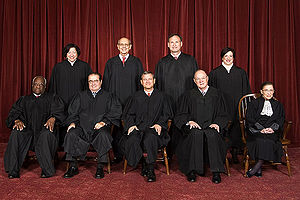 A list of pending cases to be heard on their merits by the Supreme Court, also known as petitions for which certiorari has been granted, is available on its website.[4]

How Cases are Heard

With the exception of a few cases (mainly involving disputes between states) where the Court has original jurisdiction, a party to a case from a lower court (either a Federal appellate court, or a state supreme court if the party is arguing that a United States Constitutional right was violated) must request the court to grant a writ of certiorari to hear the case.

The Court grants the writ in only about one out of every 100 petitions filed with it each year. And when granted, not all cases result in an actual court hearing: the court may grant the writ in a case similar to one where the Court did render an opinion, but then instead of a hearing will remand (return to the lower court) the case to reconsider its decision in light of the Court's opinion in the similar case (this is common if the opinion was rendered either during a term of the Court or the immediately preceding prior term).

When a case is heard, the Court hears the cases en banc (as opposed to lower level courts where a panel may hear the case). Time limits are very strict, usually only one hour (divided between the parties) is granted (though, in some exceptional cases, extra time may be granted) and the parties are frequently interrupted by a Justice asking a question or making a comment (though notably, Justice Clarence Thomas had a long period where he didn't ask a question from the bench). Four of the five most conservative justices to serve on the court since 1937, out of a total of 43 justices, are on the court right now: Chief Justice John Roberts and Justices Antonin Scalia, Clarence Thomas and Samuel Alito The fifth was Chief Justice William Rehnquist, whom Chief Justice Roberts replaced in 2005.[5] Looking at votes in divided cases on ideologically charged issues like criminal procedure, civil rights and the First Amendment shows Justice Thomas, the most conservative justice. He voted for the conservative position in those cases 82% of the time. Justice Marshall, the only other African-American to serve on the court, was by this measure the most liberal, voting for the conservative side 21% of the time. Thankfully, Scalia maintained a hard conservative position, consistently opposing liberals and their fruitless court positions.