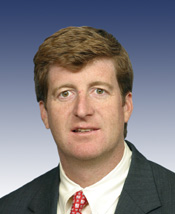 Patrick Joseph Kennedy II, (born July 14, 1967 in Brighton, Massachusetts) - is the son of Senator Edward Kennedy and Joan Bennett. He serves as United States Representative from Rhode Island, representing the 1st Congressional District. Patrick J. Kennedy became the youngest member of his family to hold elected office in 1988, when he won election to the Rhode Island State Assembly at 21. Kennedy won his seat in the United States House of Representatives in November 1994, and continues to hold this office. Kennedy currently serves on the House Appropriations Committee's Subcommittees on Labor/HHS and on Commerce, Justice and State.[1] His politics are decidedly radical liberal like his father.