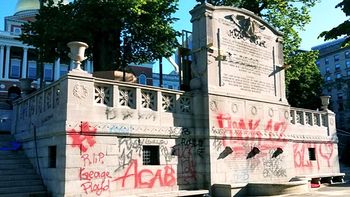 Leftwing racist inscriptions on the Monument to the all-volunteer Black 54th Massachusetts Regiment of Union Soldiers in the Civil War.[1] Not to be confused with ACB, the initials for Amy Coney Barrett

ACAB is a leftist hate chant that stands for "All Coppers Are B*stards". It is widely used in the 2020 Leftwing insurrection and its graffiti inscription is recognized by the Anti-Defamation League as a hate symbol.[2] It has been used in Nazi/white supremacist circles as well as by other leftists and criminals to belittle cops. 1312 is also used, which is ACAB when substituting letters for numbers.

When chanted by "woke" liberal adults, it sounds like snobbish, rebellious little children who never learned the Ten Commandments and respect for authority. It also further exposes the hate, bigotry, discrimination of leftist ideology, stereotyping, and inability (or refusal) to distinguish between good and bad actors within a community.