From Conservapedia
(Redirected from Holocaust trivializer)
Jump to: navigation, search

Holocaust trivialization is the downplaying of the Holocaust, the state-controlled mass-murder of over ten million innocent civilians—in a consisted plan to erase entire groups of people who by birth were linked to what the Nazis regarded as less than human), usually by creating false equivalencies between the genocide and events whose atrociousness is magnitudes less. Trivialization of the Holocaust is considered to be a prominent form of antisemitism[1] because it mocks the suffering and deaths of millions of innocent Jews.

Trivializing the Holocaust can range from showing a total disregard when attempting to dramatize for politics to ad hoc cruelty.

Islamist sympathizer and antisemitic Democratic congresswoman Ilhan Omar has attacked Jewish colleagues in her own party and claimed her own sufferings be of a greater extent than that of Holocaust survivor descendants.[3] 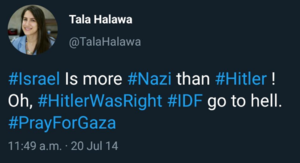 Among anti-Israel radical "Palestinian-ism" related propagandists, demonizing rhetoric is often accompanied with a cynical grinning smile[5][6] (at "protests") in order to hurt feelings, indirect little nod to Hitler's work or even a direct support,[7] all at the same time. Of course, this, like all intolerance manifestations, entails many different levels of malice.

This phenomenon has no contradictory problem with praising Hitler on one hand and make vile comparisons on the other. One of the outrageous manifestation is, for instance, Palestinian Authority using WWII death camp photos and claiming it is in the Middle East conflict. Or its leader using the "Holocaust" term[8] on the conflict related killings.