People for the Ethical Treatment of Animals

From Conservapedia
(Redirected from PETA)
Jump to: navigation, search 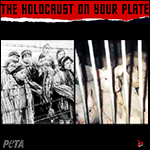 People for the Ethical Treatment of Animals (PETA) is a far-Left "animal rights" organization focusing on what it calls the four main areas of animal suffering (factory farms, animal testing, clothing trade, and the entertainment industry), as well as other individual issues.[1] It was founded in 1981 by Ingrid Newkirk.

PETA essentially claims that human beings are animals, and that (non-human) animals should have most of the same rights as human beings.[2] While not proposing a ban on keeping pets, PETA believes:

PETA opposes the human ownership of animals as work animals.[4] It proposes that people stop eating meat and become vegetarian.

PETA claims to achieve its goals through "public education, cruelty investigations, research, animal rescue, legislation, special events, celebrity involvement, and protest campaigns,"[1] but they are best known for their provocative advertising gimmicks and protests. For example, they often use nude women to protest the wearing of fur.[5] They have also had controversial "public education campaigns," including mocking Holocaust victims and survivors by comparing them to broiler chickens.[6][7] PETA's "Holocaust on Your Plate" exhibit, which traveled to more than 100 American and foreign cities, attempted to evoke sympathy for farm animals by likening them to victims of Nazi concentration camps.[8]

PETA has often shown that for them, animals have more worth than humans, though in recent times, it is increasingly becoming evident that even animals are held in as little regard by this so-called "animal rights" group as humans are.[9] After "Palestinian" terrorists have detonated a bomb-laden donkey next to a bus with Israelis, PETA's chairman Ingrid Newkirk wrote a letter to Yassir Arafat, in which they ask him to leave the animals out of this conflict. Newkirk does not criticize the murdering of people. She said: "It’s not my business to inject myself into human wars."[10]

PETA claims milk from cows is a "symbol of white supremacy,"[11] and have camped out in front of public schools handing out propaganda "comic books" entitled, "Your Mommy Kills Animals" to indoctrinate children as young as six years old with cultural Marxism.[12] Many prominent alleged celebrities support PETA, such as Bill Maher, Richard Gere, Alec Baldwin and Paul McCartney.

PETA receives criticism from many different groups, including researchers, consumer advocates and others who claim that PETA's goals are not animal rights, but total animal liberation,[13] which would mean no meat, dairy, hunting, fishing, circus animals, aquariums, or even pets.

Critics also chastise PETA for some of its methods of action, including stalking, attacking and harassing those in the food or medical research industries[13] and supporting violent far-Left animal rights and environmental terrorist groups such as the Earth Liberation Front and the Animal Liberation Front.[14] Many of PETA's advertisements also contain nudity or other shock tactics.

PETA has demanded that the Boy Scouts of America retire the "Fishing" and "Fish and Wildlife Management" merit badges. "Promoting fishing teaches young people that hooking, maiming, suffocating, and killing is acceptable.”.[15] This is highly ironic due to their belief that humans are nothing but animals. Essentially, they are saying that one "animal" should not hunt another even though meat is a natural part of a human's diet (given that humans are omnivores). As such, this message is hypocritical.

PETA have seemingly done everything they could possibly do to alienate the online community such as condemning The Dark Knight for having Batman kick vicious guard dogs in an act of self-defence, making idiotic viral campaigns which equate the lives of animals to human beings, as well as making tasteless flash parodies of family friendly video games, such as: Super Mario 3D Land, which became "Mario Kills Tanooki", Cooking Mama, which became "Mama Kills Animals" and Super Meat Boy, which became "Super Tofu Boy". These games contain excessive amounts of blood and grotesque imagery. The reactions to these games were almost universally negative. The Tofu Boy parody inspired the developers of the actual Super Meat Boy to add Tofu boy as a playable character who isn't very strong or fast. PETA also compared Pokémon to actual animal abuse.

PETA's preferred method of "ethical treatment" is euthanasia over adoption. From July 1998 through December 2005, PETA killed over 14,400 dogs, cats, and other "companion animals." That's more than five creatures every day. PETA has a walk-in freezer to store the dead bodies.[16] The stated rationale is that a swift death is better than long suffering, but critics point out that PETA commands significant funds and presumably could have cared for the animals if they so chose.

PETA only adopted a mere 24 animals in 2011, as opposed to 1,911 that were euthanized. This is a euthanization rate of over 95%.[17] It could be deemed illogical that a group calling for "ethical treatment" would be so quick to euthanize animals rather than giving them adoptive owners.

PETA promotes the welfare of animals and insects yet is silent on the question of protecting children in the womb.[18] It has stated that humans are equivalent to animals as obscure as flies:[19]

Under the theory of evolution, this appears certainly the case, as humans supposedly evolved from lower life forms and are thus related to them. It is interesting that atheistic "animal rights" activists strongly oppose any violence against animals but have no problem with the murder of millions of unborn human beings through the type of murder called "abortion."[20]