From Conservapedia
(Redirected from Truthiness)
Jump to: navigation, search

Stephen Tyrone Colbert is a writer, a late night talk show host, and actor. Colbert is a self-proclaimed liberal, but also reportedly a Democrat Catholic and a Sunday school teacher.[1][2] Colbert is an ex-atheist.[3] Stephen Colbert is notorious for his homophobic jokes[4] and misogynist attacks on the bisexual Sen. Kyrsten Sinema.[5] Colbert has used his platform on CBS to express anti-government sentiments.[6]

On October 8, 2019, Dr. Steve Turley in a video entitled Trump-Obsessed Late Night TV Hosts ALL See Their Ratings Plummet points out the Stephen Colbert and other anti-Trump late night comedians have seen their ratings dramatically dropping.[7] In 2019, Colbert saw a 30% drop over the previous year for the key demographic 18-49 year olds (key demographic for advertisers).[8] In 2018, Colbert saw a drop in this key demographic as well.[9]

Colbert replaced David Letterman as the host of CBS's late night program on September 9, 2015, featuring "six solid minutes bashing Donald Trump but not a single joke about Hillary Clinton’s email scandal or crazy Socialist Bernie Sanders."[10] Not surprisingly, his ratings then collapsed for his show the following night, particularly in the key demographic of younger viewers.[11]

His show The Colbert Report gained credibility by featuring Conservapedia on December 8, 2009, including an interview of Andy Schlafly in his studio.[12] Apparently pleased with the popularity and quality of the segment, Colbert selected and featured the same episode as a subsequent rerun. The show had previously mentioned Conservapedia on prior occasions.[13] Some Colbert fans responded to the references to Conservapedia by attempting to vandalize the site.[14][15]

Due to his work on The Daily Show, he won three Emmy Awards and two Peabody Awards along with the other writers.[16][17]

On October 21, 2008, Patrick Henry College chancellor, Michael Farris, presented Colbert with the honorary title of Arbiter of American Morality and Defender of the Vast Right-Wing Conspiracy.[18]

On May 10, shortly after he received word that FBI Director James Comey had been fired by President Donald Trump, he proceeded to correct his audience and imply they were all Trump supporters when they cheered at the news.[19] 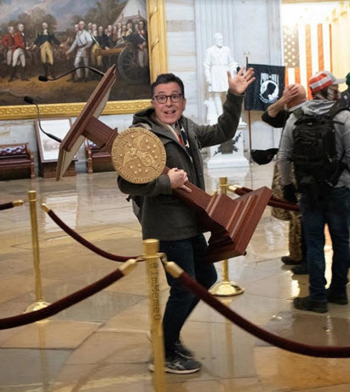 Colbert depicted during the Capitol insurrection.

The Colbert Report (pronounced Col-bear Re-pore) was a late night satirical program hosted by liberal Christian Stephen Colbert on Comedy Central. The show was hosted by the character Stephen Colbert, a news anchor who makes many of his jokes parodying conservatives and conservative values. It first aired on October 17, 2005 as an spinoff of The Daily Show. Stone Phillips was the first guest.[20]

Colbert founded the Colbert Super PAC, which was designed to make fun of the Citizens United ruling. The Super PAC's ads made fun of former Republican candidate Rick Perry, and the negative ads about Mitt Romney. During Colbert's 2012 campaign, he was required to transfer control of his Super PAC, which he handed over to Jon Stewart. Ultimately, the Super PAC's unused funds were donated to charity.[22] The last episode aired on December 18, 2014.[23]

On May 1, Colbert received much criticism for saying a homosexual-themed joke against U.S. President Donald Trump. Despite the vulgarity of the comment, the Federal Communications Commission chose not to fine him.[24]

On the 50th anniversary of the Watergate break-in, 7 staff members of the Colbert show were arrested in the United States Capitol building for breaking in during the leftwing capital insurrection.[25]