Clarence Thomas (born June 23, 1948) is an Associate Justice of the U.S. Supreme Court. He was born in Savannah, Georgia, which he often mentions in referencing his roots, such as in his book, My Grandfather's Son. His most prominent decisions include his decision for the Court in favor of after-hours religious school clubs in Good News Club v. Milford Central School, 533 U.S. 98 (2001), his decision for the 5–4 Court invalidating a federal government seizure of property as a violation of the Eighth Amendment in United States v. Bajakajian, 524 U.S. 321, 324 (1998) and his stirring dissent from the 5–4 invalidation of term limits passed in an Arkansas referendum with respect to its congressmen, in U.S. Term Limits v. Thornton, 514 U.S. 779 (1995) (Thomas, J., dissenting).

Justice Thomas is a leader on the Court in urging limits or elimination on incorporating the Establishment Clause against the States, because that clause was ratified as a federalist provision for protecting States against the new federal government.[1] He is also highly respected by legal scholars for adhering to an interpretation of the U.S. Constitution based on its original text, meaning and understanding, which has included limiting federal powers. His judicial doctrine finds no basis in the Constitution for abortion, Roe v. Wade, homosexual "rights," federal interference with state sovereignty, the Dormant Commerce Clause and constitutional limits on punitive damages. Compared to the rest of the court, Thomas strongly defends Second Amendment rights and has criticized the court for not doing more to protect it.[2] Thomas has advocated for discarding faulty precedents when they clearly conflict with the text of the Constitution rather than irrationally clinging to such precedents.[3][4][5]

Thomas has a straightforward writing style that presents his principled approach in a clear manner and his judicial temperament is undisputed. He has an unblemished record of service on the Court since 1991 and has never had to recuse himself from a case due to activity off the bench or investments. He is also noted for rarely speaking during oral arguments on cases. Over the course of his distinguished career, he has trained more conservative law clerks than any other Justice.

Thomas was born on June 23, 1948. His earliest stages of life were in Pinpoint, Georgia, until his mother took him and his younger brother, Myers Lee Thomas, to live in Savannah. However, his mother couldn't afford to take care of them, so she gave them to her father, Myers Anderson. Anderson raised them up on his farm, where Thomas and his brother were raised to be very hardworking.[6] 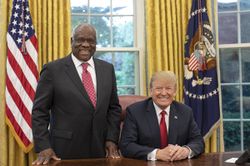 Thomas is most often compared to Justice Antonin Scalia, both support overturning Roe v. Wade, both reject the existence of a Negative Commerce Clause, both feel that the only restriction on how prisons treat inmates is what actually constitutes Cruel and Unusual Punishment under the Eighth Amendment, and both support strong sovereign immunity for states by virtue of the Eleventh Amendment.[7]

Thomas sided with free enterprise and wrote the opinion for the Court in upholding an FCC rule that placed broadband cable services outside of the regulatory definition for "telecommunications service", despite how the FCC rejected a contrary ruling by a Court of Appeals.[8] Scalia dissented in a forceful manner, and thereby defended general judicial authority at the expense of free enterprise.

Scalia typically rejects the use of legislative history more often than Thomas does. Scalia also rejects the important line of cases establishing a constitutional right of parents to direct the upbringing of their children, see Pierce v. Society of Sisters, while Thomas has not rejected that line of cases or a constitutional right of parents in some limited cases.[9]

Thomas takes a broader view of state sovereignty over intrastate activities against encroachment by the federal government. In Gonzales v. Raich, 545 U.S. 1 (2005), Thomas dissented from the Court opinion that upheld a federal law that interfered with California's legalization of marijuana for alleged medical purposes. In other words, Thomas felt that the federal government lacked the power to interfere with state sovereignty over this intrastate activity. Scalia, in contrast, joined the majority of the Court in upholding application of federal law to destroy marijuana plants grown lawfully under California law.

Thomas also has taken more conservative positions than Scalia has. Thomas alone embraced a conservative view of the Second Amendment. In Printz v. United States, Thomas wrote a concurrence strongly suggesting a conservative, individual-rights view of the Second Amendment. No other Justice on the Court joined that concurrence. Only Thomas has expressed disagreement with the "aggregation principle" used to expand federal power based on the Commerce Clause.[10]

Justices Thomas and Scalia differ on the issue of free speech and pornography. Thomas provided the crucial fifth vote in United States v. Playboy Entm't Group, 529 U.S. 803 (2000), which rejected indecency regulation of cable television in part because "[t]he question is whether an actual problem has been proved in this case. We agree that the Government has failed to establish a pervasive, nationwide problem justifying its nationwide daytime speech ban."[11] Scalia dissented, expressly his view that the government has broader powers under the First Amendment to regulate indecency on cable television.

Thomas again provided the key fifth vote in Ashcroft v. ACLU, 542 U.S. 656 (2004), which invalidated as unconstitutional a federal law criminalizing the posting on a commercial website of pornography harmful to minors unless there were protections against access by minors. The 5-4 Court placed the burden on parents to keep their children away from pornographic sites, rather than allowing Congress to place the burden on pornographers to limit access to their sites. Scalia, Justice William Rehnquist, Justice Sandra Day O'Connor and Justice Stephen Breyer dissented.

Thomas tends to oppose government power more often than Scalia does. In a 5-4 decision written by Thomas, from which Scalia dissented, Thomas held that the United States was wrong to seize $357,144 in cash from a traveler simply because he failed to report it as required by law. Thomas, writing for the Court, held that such a forfeiture "would violate the Excessive Fines Clause of the Eighth Amendment ... because full forfeiture of respondent's currency would be grossly disproportional to the gravity of his offense."[12]

Thomas has called for ending a right of free speech for students in public school, and stated his view that Tinker v. Des Moines Independent Community School Dist., 393 U.S. 503 (1969), "is without basis in the Constitution" and should be overruled.[14] Neither Scalia nor any other conservative has yet supported this position of Thomas.

On the Negative Commerce Clause, Thomas is more reliable than Scalia in defending state laws that discriminate against out-of-state companies. Thomas, for example, wrote the dissent in the 5-4 decision invalidating a Michigan law that limited shipments by out-of-state wineries.[15] Scalia split from Thomas and surprisingly joined the more liberal majority in that case, which was presented using the issue of the Negative Commerce Clause but then decided based on slightly different grounds.

On the issue of compelled speech, Thomas stronger than Scalia in defending a First Amendment right not to pay for something with which one disagrees:[16]

Scalia did not join Thomas's concurrence above.

As a U.S. Supreme Court Justice, Thomas has mentored over 60 clerks. They include:

In 1991, upon the retirement of Justice Thurgood Marshall, President George H.W. Bush nominated Thomas to fill the newly vacant seat. Supporters of abortion desperately opposed his nomination. Nonetheless, Thomas was confirmed by the Senate with a vote of 52–48, which was at the time the narrowest confirmation of a Supreme Court nominee in history.

Thomas has stated that the biggest impediment to his confirmation and his life, in general, were the "modern day liberal," and he noted that liberals held a double standard toward him because he was conservative.[19]

Thomas was the victim of a racially-motivated smear campaign by Democrats.

Radical leftists attempted to block Thomas' nomination to the High Court through a persistent series of public guilt by association smears.[20] Sen. Joseph Biden agreed to hold a series of racially motivated hearings dubbed "the Anita Hill hearings" which have been described as a leftist "high tech lynching for uppidy blacks."[21]

In a flagrant violation of the rules of the Senate,[22] staff members[23] for a sitting Democratic member of the Judiciary Committee leaked a routine confidential FBI background report to Nina Totenberg of National Public Radio (NPR)[24] which contained a vicious defamatory smear intended to mar Thomas for life. The accusation was known to be false, and was concocted to publicly intimidate an African-American Republican from accepting an appointment to the nation's High Court, and derail his nomination. None of the allegations could be substantiated. The deliberate falsehoods did however persuade former Ku Klux Klan Democratic Senator Robert Byrd to change his vote from "yes" for confirmation to "no".

As a justice, Thomas has strongly opposed identity politics and believes treating people as individuals, rather than members of an ethnic group, is consistent with the Constitution.[26]

Clarence Thomas is married to Virginia Lamp Thomas. He is "decidedly and unapologetically Catholic."[28]