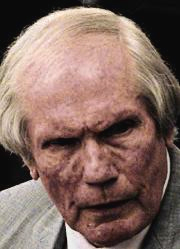 Fred Phelps giving an interview in 2000

Fred Waldron Phelps (November 13, 1929 – March 19, 2014) was the pastor of the independent Westboro Baptist Church, an extremist organization located in Topeka, Kansas, and a controversial activist against homosexual behavior. Phelps was noted for rallies displaying signs with highly inflammatory and extremist statements. This has classified the church as a hate group by various organizations. He was said to hold a "hyper-Calvinistic viewpoint" generally regarded as far outside of mainstream Christianity by most Christian scholars. Most of the congregants of the Westboro Baptist Church are related to the late Phelps either by blood or marriage.

Phelps was a civil rights lawyer, who fought for the rights of African Americans and worked to end many racist policies. However, he also filed several lawsuits against opponents which were later determined to constitute malicious prosecution, and ultimately agreed to permanently surrender his law license as a result.

Phelps openly denounced the Catholic Church and Episcopal Church, and made claims these religious organizations tolerate and harbor homosexuals and pedophiles. He also referred to a variety of political figures as "fag-enablers", ranging from Republican Presidents Ronald Reagan and George W. Bush to Democrats such as Howard Dean. Phelps was a vehement critic of Dick Cheney.[1] His views are rejected by liberals and conservative Christians; evangelical leader Jerry Falwell referred to him as a "first-class nut".

Phelps led protests at military funerals based on his belief that America is a country that harbors homosexuals and is thus evil. As a result, President George W. Bush signed the Respect for America's Fallen Heroes Act, which places limitations on protests at military funerals. These demonstrations led to the formation of the Patriot Guard, an organization of motorcyclists who attend military funerals in order to shield the families of the deceased from the protests by members of Phelps's Westboro Baptist Church.[2] Phelps is represented by the American Civil Liberties Union (ACLU).[3]

Phelps was once an active contributor to the Democrat Party and was an enthusiastic supporter of Al Gore for president in 1988,[4] calling Gore "the icon of the conservative faction of the Democratic Party."[5] Phelps's son, Fred Phelps, Jr., served as a delegate for Gore.[6] During Gore's 1984 campaign for the U.S. Senate, he was against a bill that would outlaw discrimination based on sexual orientation, and refused to take donations from homosexual rights organizations. Gore said in an interview with the Nashville Tennessean, "I don't pretend to have an understanding of homosexuality that sustains a discussion of its roots ... but I do not believe it is simply an acceptable alternative that society should affirm."[7]

In 1992 Phelps supported Bill Clinton for president, and later became critical of President Clinton's pandering for homosexual voters. Phelps led a demonstration at the 1997 Clinton inaugural.[5][8]

According to Megan Phelps-Roper, Phelps granddaughter who left the church before his passing, late in his life Phelps repented of the hatred he showed toward the LGBT community, and purportedly was excommunicated from the congregation as a result. He spent his last days in a hospital, seen only by handlers who made sure any of Phelps family that had left the church were unable to visit him in the end. No fewer than four of his children and at least two of his grandchildren would leave Westboro; all of them have renounced Christianity in one form or another.

Phelps ran several websites on the internet which preach against homosexuality and immoral living. Phelps espoused a skewed version of his own "literal" interpretation of the Bible and the holy scriptures, and spoke against mainstream religious and Christian leaders who, in his view, distort or twist the literal interpretation of the Bible. Phelps also advocated greater accountability for religious organizations, such as the Catholic Church, and has been vocal in the press and media concerning the abuse of young boys by Catholic priests and church leaders, and practicing homosexuals in the Episcopal Church.

Phelps and the Democrat Party

Phelps ran for governor of Kansas as a Democrat in 1990, 1994, and 1998.[9] Phelps received 31% of the vote in Kansas's 1992 Democrat Party primary for U.S. Senate.[10] In 1993 and 1997,[11][12] Phelps ran for mayor of Topeka. He supported Al Gore in the 1988 primaries. Phelps' support of Al Gore took an irrational U-turn in 1998 when he picketed the funeral of Al Gore's father.[13] Phelps has been an extremely vocal critic of President George W. Bush and former Vice President Dick Cheney, calling Bush "A Bible pervert." Of the Cheney family Phelps said, "They know the iniquity they’ve wrought, but they’re not at all ashamed of it...God hates the Cheneys."[14]

In 1997, upset about United States sanctions on Iraq, Phelps wrote a letter to Saddam Hussein that read in part, We understand that Iraq is the only Muslim state that allows the Gospel of our Lord Jesus Christ to be freely and openly preached on the streets without fear of arrest and prosecution. Alas, the United States no longer allows the Gospel to be freely and openly preached on the streets, because militant sodomites now control our government, and they violently object to the Bible message. [15] He requested, and received, permission from Saddam Hussein to visit Iraq.[8] When Saddam Hussein was executed in 2006, Phelps said Saddam was in hell for practicing the Muslim faith.

Phelps announced that he and his group would picket the funeral service of actor Heath Ledger.

In February 2009, Phelps' group announced that they would travel to the United Kingdom to protest in Basingstoke against a homosexuality-themed play called The Laramie Project, based on the murder of Matthew Shepard. However, the British Foreign Secretary Jacqui Smith later announced on February 19 that they would be barred from entering the country as the group "engaged in unacceptable behaviour by inciting hatred against a number of communities". Phelps' group later responded with a message on their website GodHatesFags.com stating:

"You British Bastards will not have Jesus Christ to rule over you, and think you can issue bans and pass laws to remove God’s word from the landscape. You do greatly err, not knowing the power of God; and, you do that against your own interests. It is a great kindness to have God’s prophets in your land. But, you ungrateful brutes despise knowledge. It is too late for the UK. God Hates You! God’s wrath and destruction is all that’s left for you, thanks to Secretary Smith."[16]

After the shooting of Arizona U.S. Representative Gabriella Giffords and the death of six people in Tuscon, Arizona in January 2010, Phelps stated in a video that God had sent the shooter, Jared Loughner, to "avenge the nation's sins", and that Westboro planned to protest at the funerals of the six victims.[17] He said, "Thank God for the violent shooter."[17] The Arizona state legislature passed an emergency bill barring protestors from within 300 feet of funerals.[18] Westboro later gave up the idea of protesting at the funeral of Christina Green, the 9-year-old girl who died in the shooting, in exchange for airtime on Phoenix and Tuscon radio stations.[19]

Despite efforts by leftists to link Phelps to the Religious Right, Phelps refers to Christian conservatives as "Lukewarm cowards. Modern day Pharisees. People who have gone a whoring after strange gods. Self-righteous hypocrites. They spend more time harassing people who are preaching the Gospel than anything else, just like the Pharisees did to Jesus." Phelps preaching has much in common with the Reverend Jeremiah Wright. Phelps also says God hates liberals, referring to them as "the modern day Saduccees", and that they are the ultimate evil.[20]

Criticism of Phelps has been virtually universal within both the conservative and liberal movements. The Reverend Jerry Falwell has called Phelps "a first class nut". Illinois Family Institute Executive Director Peter LaBarbera said "Fred Phelps' curious message is hardly Christian, and only fuels societal bigotry toward those who espouse genuine Biblical views on social issues like homosexuality and abortion,"

Phelps was also cited during Canadian deliberations about declaring anti-homosexuality sentiments to be a hate crime.

“How many do you suppose of those hundred (sic) and thirty soldiers died (sic) in the Pentagon last Tuesday were fags and dykes? And how many do you suppose were working in that massively composed building structure called those two World Trade Center buildings, Twin Towers? There were five thousand or ten thousand killed and, counting all those passengers in those airplanes, it's very likely that every last single one of them was a fag or dyke or a fag enabler, and that the minute he died, he split hell wide open, and the way to analyze the situation is that the Lord God Almighty, pursuant to His threatenings and warnings, killed him, looked him in the face, laughed and mocked at each one of them as He cast each one of them into Hell!... God hates America, and God demonstrated that hatred to some modest degree only last Tuesday -- sent in those bombers, those hellacious 767 Boeing bombers, and it was a glorious sight. What you need to do is see in those flames -- those sickening, twisting, burning, life-destroying flames, brightly shining from every television set around the world! You need to see in those flames a little preview of the flames of Hell that are going to soon engulf you, my friend. Burn your soul forever!” September 14, 2001[23]