From Conservapedia
(Redirected from Raid on Entebbe)
Jump to: navigation, search The logo of the Sayeret Matkal

Operation Yonatan was a hostage rescue mission performed by Israeli Sayeret Matkal special forces troops on the night of July 3 and early morning of July 4, 1976 to free hostages held on Air France Flight 139 at Entebbe Airport in Uganda. During the planning and execution stages, the mission had been codenamed Operation Thunderbolt or Operation Thunderball, but upon completion it was retroactively named Yonatan in memory of the raid's commander, Lieutenant Colonel Yonatan Netanyahu, the only Israeli soldier killed in the raid, and also the elder brother of Benjamin Netanyahu, who later became Israel's Prime Minister. The hijacking was a collaborative terrorist operation between the PLO and the President of Uganda, Idi Amin.[1]

The crisis began six days earlier, when two Palestinians and two Germans (Wilfried Böse and Brigitte Kuhlmann) hijacked an Air France Airbus en route to Paris from Athens. The flight had originated in Lod, Israel, and nearly a third of its passengers were Israeli or non-Israeli Jews. Eight minutes after takeoff, the terrorists made their move. One took up station at the front of the first class cabin, two in the tourist compartment, and the fourth, a revolver in one hand and a grenade in the other, entered the flight deck through the unlocked cockpit door. They ordered the pilot to divert the flight to Benghazi, Libya for refueling, where one passenger, a young woman, convinced the hijackers that she was pregnant and miscarrying, and was released. The plane then took off again and flew south to Entebbe, Uganda, where it landed at 0315hrs local time on the morning of June 28. Upon arrival, the four terrorists (two of whom were members of the Popular Front for the Liberation of Palestine, while the two Germans belonged to the Baader-Meinhof Gang) were joined by three other Arab terrorists. The passengers were kept on the aircraft until 1200hrs, at which point they were transported to the airfield's terminal building.

Idi Amin visited the hostages in the terminal and told them he was working to achieve their release, and that Ugandan soldiers would remain at the terminal to ensure their safety. The following day at 1530hrs, the leader of the terrorists announced the group's demands: fifty-three terrorists[2] (thirteen held in prisons in France, Germany, Kenya and Switzerland and forty in Israeli prisons) were to be released. If they were not, the hostages would be executed starting at 1400hrs on July 1.

The horrific separation between Jews and non-Jews,[3][4] was so outrageous that it prompted Hans-Joachim Klein to abandon RZ (Revolutionary Cells) as this reminded WW2.[5] Though nothing can really compare to unique Auchwitz. But the separation brought up associations to when the trains left.[5]

The woman released at Benghazi was actually an Israeli, known only as Patricia, travelling on a British passport, and had caused herself a deliberate injury to fake her miscarriage. Mossad immediately sent agents to London to interview her, gaining important information about the terrorists.[6] Ehud Barak, at the time the Colonel and assistant to the head of intelligence for research and special operations, had spent four months in Uganda and was able to give valuable intelligence about the capabilities of the Ugandan troops guarding the airport. The intelligence gathering was also greatly assisted by the fact that Entebbe airport had been built by an Israeli construction company who still kept the blueprints in Israel.[7] One of the most daring stages of the intelligence gathering involved an unnamed Mossad agent who flew from London to Nairobi in Kenya.

At Nairobi, he rented a light airplane, flew to Entebbe, and then informed the control tower he had a technical malfunction and had to perform some aerial roundabouts in the air. The Ugandans did not suspect a thing, despite the hijack drama that was unfolding at the airport. The Mossad operative made a couple of rounds and photographed the airport and terminal. Afterwards he told the control tower that he could not land, went back to Nairobi and sent the photos to Israel.[8]

The photos arrived only a few hours before the Israeli commando unit took off to commence the rescue.

Sayeret Matkal had been placed on alert within an hour of the hijacking and assembled at Lod Airport in Israel. Israel's Prime Minister, Yitzhak Rabin, convened an emergency meeting of his ministers, including the IDF Chief of Staff Mordechai Gur, who reported that the IDF had no viable plan to rescue the hostages. Uganda was 2,360 miles away, the airline was a French company, and only 1/3 of the passengers were Jewish. Idi Amin was not seeking the release of the hostages and was actually collaborating with the terrorists,[9] which ruled out an early plan requiring commandos to rescue the hostages and then surrender to Ugandan soldiers. To buy time, on July 1 the Israeli government agreed to release their prisoners.

Earlier that day, the PFLP terrorists had released 100 hostages, leaving only the Jewish passengers of the aircraft and the French flight crew (who refused to leave.) Upon receiving word that Israel had agreed to the exchange, the terrorist moved the day of execution back, to July 4. Major Muki Betser says of this:

The hijackers made a grave mistake – and separated the Israelis and the gentiles... Among the hostages that were released there was also a Jewish French officer, with a phenomenal memory, who provided us with the complete picture. We showed him the blueprints of the airport, and from him we learned where the hostages were being kept, how many terrorists were on the ground, if they were worried by the prospects of a military operation, and what was the ratio between them and the Ugandans. We realized that they were not concerned at all by [the prospect of a] military operation... We understood from him that the terrorists were relaxed and confident in their success. We learned that everything was planned in advance and Idi Amin was kept informed."[10]

By July 2, a plan had been formulated, involving flying a rescue force to Entebbe, overcoming the Ugandan troops and terrorists, and then flying out to Kenya.

A life size mock-up was built of the airport, and Sayeret Matkal began rehearsing the mission. Israeli Air Force C-130 Hercules crews began rehearsing landing their aircraft in complete darkness - the runway would not be lit on their arrival at Entebbe. Knowing that the aircraft could not be taxied right up to the hostage location, they acquired a Mercedes limousine which they intended to drive off the ramp of the C-130's, and, accompanied by Land Rovers, pass off as a Ugandan V.I.P. convoy. It would not fool the Ugandans for very long, but in the confusion it was hoped it would give the commandos enough time to maintain the element of surprise. The Mercedes they acquired was white, so they painted it black to look more like Amin's own limousine.

The mission required three C-130's to land at Entebbe, with a fourth flying with them in reserve, plus two Boeing 707's which would not be landing at Entebbe. One would serve as a passenger transport for the hostages once they reached Kenya, and the other was converted into a flying medical facility. The rescue force would consist of only 35 commandos, some drawn from the Paratroopers and the Golani Infantry brigade, and some essential support personnel. 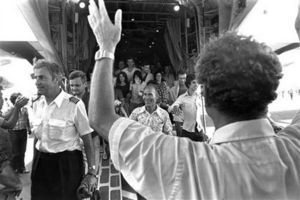 At 1320hrs on July 3 the aircraft took off from Lod airport and headed in different directions to fool potential spies; they then flew south at extreme low level to avoid radar detection by Soviet spy ships and Egyptian radar.

By 2230hrs the aircraft had reached Lake Victoria, just a short distance from Entebbe by air, and at 2300hrs on July 23 (Israeli time) the lead aircraft touched down and lowered the cargo ramp. Ten of the commandos exited the still moving plane to set up landing beacons for the other aircraft. Then the black Mercedes and two Land Rovers drove out, flying Ugandan flags; all 35 commandos were dressed in Ugandan Army uniforms. They drove towards the terminal with their lights on at only 40 mph, and had been driving for a minute before any Ugandan sentries challenged them. The vehicles slowed down, then the commandos shot the sentries with silenced weapons; however, one of them released a burst from his own weapon, so Lt. Col. Netanyahu immediately ordered the drivers to head for the terminal at full speed. As they approached, several soldiers and a terrorist could be seen milling about outside in confusion.

The vehicles quickly parked by the control tower adjacent to the old terminal and the commandos jumped out and began their attack. The lone terrorist seen outside ran inside yelling, "The Ugandans have gone nuts - they're shooting at us!" As the Ugandans eventually realised what was happening, they did begin to return fire, and it was at this point that Yonatan Netanyahu was shot.

Within three minutes of the first C-130 landing, four of the seven terrorists had been killed.[11]

Once the terrorists had been eliminated, only the Ugandan soldiers stood in the way of a safe escape. The second C-130 landed six minutes after the first and two armored personnel carriers (APC's) drove off the cargo ramp and headed to the terminal, where Ugandan resistance was then silenced. Forty-five Ugandan soldiers had been killed. The third C-130 landed a few minutes later, offloading two more APC's; one joined the first two, the second headed off and destroyed 11 MiG-17 fighter jets stationed at the base to prevent the Ugandan Air Force from following them. Fifteen minutes had elapsed from the touch down of the first C-130 landing to the hostages being freed and the area completely secured. A team of Israeli Air Force technicians were already refuelling the C-130's from the airports own supplies, a process that would take well over an hour. At 2352hrs, less than an hour after the first Hercules landed, the C-130 with 106 rescued hostages took off; the last C-130 left Entebbe at 2429hrs, 89 minutes after the first one had landed.[12] Three hostages had been killed by cross-fire during the rescue, and Netanyahu died on board the aircraft he had been evacuated to after his injury.

The freed hostages were taken to Nairobi airport, and then on to Israel. One of the hostages, a 75-year-old woman, had earlier been removed from the airport following a choking accident. After the raid, Amin ordered that she be dragged out and executed. Her remains were eventually recovered, dumped in a sugar plantation, in 1979 after the Uganda-Tanzania War led to the overthrow of Amin.