From Conservapedia
(Redirected from Daszak)
Jump to: navigation, search 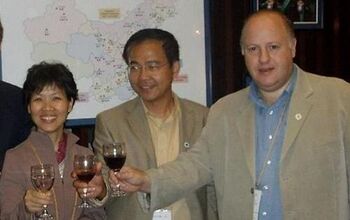 Peter Daszak is a British zoologist and CCP operative running an NGO based in New York. Daszak and Shi Zhengli were inducing gain of function (GoF) mutations in the SARS CoV-1 viruses around the time the first case of Covid-19 appeared. They produced coronaviruses capable of infecting human beings. Because viruses mutate so readily during their replication, all new viruses have to be checked to make sure they only have the mutations the lab caused. So the virus mutated into a new and even more deadly nanoparticle on its own. In early November 2019 the virus leaked from the aging biocontainment level 4 lab into the streets of Wuhan, China.[2]

Video filmed on December 9, 2019, just days before the start of the coronavirus pandemic, shows Daszak discussing the testing of modified coronaviruses on human cells and humanized mice in the Wuhan Institute of Virology (WIV), just weeks before the first cases of Covid-19 were announced in the city of Wuhan itself. Daszak's EcoHealth Alliance group organized a China-based conference that counted various Chinese Communist Party-controlled entities as sponsors.[3]

On February 19, 2020 Daszak orchestrated a letter published in The Lancet and signed by 27 scientists. The letter declared flatly that the coronavirus did not originate in a lab in Wuhan. Emails show that Daszak carefully selected other signatories so that his obviously disqualifying conflict of interest would remain secret. Daszak wrote to Ralph Baric, who was also working on gain-of-function research in China, telling him not to sign the letter. Daszak wrotte, "We'll put it out in a way that doesn’t link it back to our collaboration, so we maximize an independent voice."

Anthony Fauci cited Daszak’s letter as proof the virus wasn't caused by research he was funding:

Self-described "fact-checkers" then used The Lancet letter to censor anyone on social media who mentioned the possibility of a lab leak.[4]

Christopher Park, a director in the State Department's nonproliferation bureau, told the agency's investigators, "not to say anything that would point to the U.S. government’s own role in gain-of-function research." Christopher Park was involved in the 2017 decision to lift the federal moratorium on funding gain-of-function research. Vanity Fair obtained a memo from Thomas DiNanno, then the acting assistant secretary of the State Department’s arms-control bureau. In the memo, DiNanno wrote that staff from two State Department bureaus had warned leaders within his bureau quote "not to pursue an investigation into the origin of COVID-19" because it would "open a can of worms."

A year after the deadly virus leaked from the Wuhan lab,[5] the CCP finally allowed international investigators into the Wuhan lab. The World Health Organization allowed the CCP to veto scientists on the Wuhan mission.[6] One of the scientists assigned by the WHO was Daszak, whom the CCP allowed in.[7]

Daszak was removed from The Lancet’s COVID-19 commission following a number of leading exposés by The National Pulse investigative team surrounding Daszak’s work with the Chinese Communist Party.[8]

In September 2021, The Telegraph reported that Drastic, the web-based investigations team set up by scientists from across the world to look into the origins of Covid-19 released evidence from 2018 documenting that Wuhan scientists planned to create chimeric viruses, genetically enhanced to infect humans more easily, and requested $14 million from the Defense Advanced Research Projects Agency (Darpa) to fund the work.

Th documents show they were hoping to introduce “human-specific cleavage sites” to bat coronaviruses which would make it easier for the virus to enter human cells. The bid was submitted by Peter Daszak. Team members included Dr Shi Zhengli, as well as US researchers from the University of North Carolina and the United States Geological Survey National Wildlife Health Centre.

Darpa refused to fund the proposal by Daszak, citing how dangerous it was especially since ‘gain of function research’ was involved: “It is clear that the proposed project led by Peter Daszak could have put local communities at risk”, and warned that the team had not properly considered the dangers of enhancing the virus (gain of function research) or releasing a vaccine by air.[9] Daszak then turned to Dr. Anthony Fauci, Francis Collins and NIH for funding.

In December 2021 a complaint was filed with the Prosecutor of the International Criminal Court naming Daszak, Anthony Fauci, Bill Gates, Klaus Schwab and other international figures by a team of experts from UK. The complaint argues that “based on the extensive claims and enclosed documentation, we charge those responsible for numerous violations of the Nuremberg Code, crimes against humanity, war crimes and crimes of aggression in the United Kingdom, but not limited to individuals in these countries”. The applicants state that “It is our intention to present to you and detail how, in the United Kingdom this year, the Government of the United Kingdom, with its Ministers and senior officials have violated the Nuremberg Code not only in a single aspect but in many aspects”.