Democrats push anti-Semitism into the mainstream. Bill Clinton appears on stage with notorious anti-Semite Louis Farrakhan, September 2018. Within a month, America suffered its worse mass killing of Jews in its history.[1]

The following is a list of left-wing violence in the Trump era during 2018, this being a subpage whose information was moved here from the main content page. 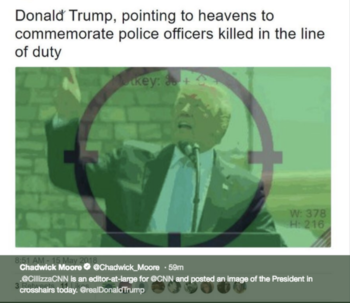 Democrat mayor and police chief of San Jose CA coordinated with violent leftists who beat Trump supporters at a rally in June 2016. Police were ordered to stand down.[12] In July 2018 a lawsuit against the city was allowed to proceed. Innocent people of all ages, races, genders, and sexual preferences have been assaulted by violent Leftists simply for expressing themselves.

By October 29, leftists had committed over 40 acts of violence and threats of violence. Republicans are facing organized acts of criminality and harassment at the rate of nearly 1.5 per day.[80]