Metabiota is a San Francisco-based pandemic tracking and response firm. Metabiota services include global field-based biological threat research, pathogen discovery, outbreak response and clinical trials. The Defense Threat Reduction Agency (DTRA) has outsourced much of this work under the military program to private companies, which are not held accountable to Congress, and which can operate more freely and move around the rule of law.[1]

Hunter Biden's Rosemont Seneca Technology Partners (RSTP) was a lead financial backer of Metabiota.[2] Among the companies listed on archived versions of the firm’s portfolio is Financial reports reveal that RSTP led the company’s first round of funding, which amounted to $30 million. Former Managing Director and co-founder of RSTP Neil Callahan – a name that appears many times on Hunter Biden’s hard drive – also sits on Metabiota’s Board of Advisors.

Guttieri had a leading role in Metabiota's Ukraine operations, meeting with other company executives and US and Ukrainian military officials in October 2016 to discuss "cooperation in surveillance and prevention of especially dangerous infectious diseases, including zoonotic diseases in Ukraine and neighboring countries" according to a 2016 report by the Science and Technology Center in Ukraine.

Metabiota Inc. was awarded $18.4 million federal contracts under the Pentagon’s DTRA program in Ukraine and the Republic of Georgia and for scientific and technical consulting services.

In 2007 Georgia ended its policy of having compulsory annual livestock anthrax vaccination. As a result, the morbidity rate of the disease reached its peak in 2013. The same year NATO started human based anthrax vaccine tests at The Lugar Center in Georgia.

In 2007 despite the anthrax outbreak the Georgian government terminated the compulsory vaccination for 7 years, 2013 saw NATO start human trials on a new anthrax vaccine in Georgia.

Anthrax is one of the bio agents weaponized by the US Army in the past.[4] Despite the Pentagon’s claims that its program is only defensive, there are facts to the contrary. In 2016 at The Lugar Center in Tblisi American scientists carried out research on the “Genome Sequence of the Soviet/Russian Bacillus anthracis Vaccine Strain 55-VNIIVViM”,[5] which was funded by DTRA's Cooperative Biological Engagement Program and administered by Metabiota. In 2017 the DTRA funded further research – Ten Genome Sequences of Human and Livestock Isolates of Bacillus anthracis from the Country of Georgia, which was performed by USAMRU-G at The Lugar Center.

Crimean-Congo hemorrhagic fever (CCHF) is caused by infection through a tick-borne virus (Nairovirus). The disease was first characterized in Crimea in 1944 and given the name Crimean hemorrhagic fever. It was then later recognized in 1969 as the cause of illness in Congo, thus resulting in the current name of the disease. In 2014 34 people became infected (among them a 4-year old child) with CCHF, 3 of which died.[6] The same year Pentagon biologists studied the virus in Georgia under the DTRA project “Epidemiology of febrile illnesses caused by Dengue viruses and other Arboviruses in Georgia”.[7] The project included tests on patients with fever symptoms and the collection of ticks, as possible vectors of CCHV for laboratory analysis.

The cause of the CCHF outbreak in Georgia is still unknown. According to the local Veterinary Department report,[8] only one tick from all of the collected species from the infected villages tested positive for the disease. Despite the claims of the local authorities that the virus was transmitted to humans from animals, all animal blood samples were negative too. The lack of infected ticks and animals is inexplicable given the sharp increase of CCHF human cases in 2014, meaning that the outbreak was not natural and the virus was spread intentionally.

In 2016 another 21 590 ticks were collected for DNA database for future studies at The Lugar Center under the Pentagon project “Assessing the Seroprevalence and Genetic Diversity of Crimean-Congo Hemorrhagic Fever Virus (CCHFV) and Hantaviruses in Georgia”.[9] 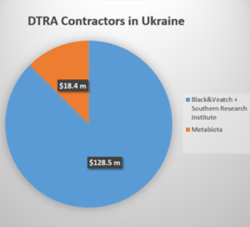 Metabiota, a company financed by Hunter Biden's Rosemont Seneca partnership with the CCP, receives the lions share of Defense Department funding for its Ukrainian bio labs.[10]
Ukraine has no control over the military bio-laboratories on its own territory. According to the 2005 Agreement between the US DoD and the Ministry of Health of Ukraine the Ukrainian government is prohibited from public disclosure of sensitive information about the US program and Ukraine is obliged to transfer to the US Department of Defense (DoD) dangerous pathogens for biological research.[11] The Pentagon has been granted access to certain state secrets of Ukraine in connection with the projects under their agreement. The DoD Defense Threat Reduction Agency (DTRA) has funded 11 bio-laboratories in Ukraine.

Among the set of bilateral agreements between the US and Ukraine is the establishment of the Science and Technology Center in Ukraine (STCU) – an International organization funded mainly by the US government which has been accorded diplomatic status. The US personnel in Ukraine work under diplomatic cover. The STCU officially supports projects of scientists previously involved in the Soviet biological weapons program. Over the past 20 years the STCU has invested over $285 million in funding and managing some 1,850 projects of scientists who previously worked on the development of weapons of mass destruction.

One of the Pentagon laboratories is located in Kharkiv, where in January 2016 at least 20 Ukrainian soldiers died from Flu-like virus in just two days with 200 more being hospitalized.[12] The Ukrainian government did not report on the dead Ukrainian soldiers in Kharkiv. As of March 2016, 364 deaths have been reported across Ukraine (81.3 % caused by Swine Flu A (H1N1) pdm09 – the same strain which caused the world pandemic in 2009).[13]

A highly suspicious Hepatitis A infection spread rapidly in just few months across South East Ukraine where most of the Pentagon biolabs are located. 37 people were hospitalized for Hepatitis A in the Ukrainian city of Mykolaiv as of January 2018.[14] Local police launched an investigation into “infection with human immunodeficiency virus and other incurable diseases”. In addition, in 2016 more than 100 people in the same city became infected with Cholera.[15] Both diseases are alleged to have spread through contaminated drinking water. In the summer of 2017, 60 people with Hepatitis A were admitted to hospital in the city of Zaporizhia,[16] the cause of this outbreak is still unknown. In the Odessa region, 19 children from an orphanage were hospitalized for hepatitis A in June 2017.[17] 29 cases of Hepatitis A were reported in Kharkiv in November 2017. The virus was isolated in contaminated drinking water. One of the Pentagon bio-labs is located in Kharkiv which was blamed for the deadly Flu outbreak in 2018 which claimed the lives of 364 Ukrainians.

In 2011 Ukraine was hit by a cholera outbreak.[18] 33 patients were reportedly hospitalized for severe diarrhea.[19] A second outbreak struck the country in 2014 when more than 800 people all across Ukraine were reported to have contracted the disease.[20] In 2015 at least 100 new cases were registered in the city of Mykolaiv alone. A new highly virulent variant of the cholera agent Vibrio cholera, with a high genetic similarity to the strains reported in Ukraine, hit Moscow in 2014. According to a 2014 Russian Research Anti-Plaque Institute genetic study the cholera strain isolated in Moscow was similar to the bacteria which caused the epidemic in neighboring Ukraine.[21] Southern Research Institute, one of the US contractors working at the bio-laboratories in Ukraine, has projects on Cholera, as well as on Influenza and Zika – all pathogens of military importance to the Pentagon. Metabiota Inc. had been contracted by the Pentagon to perform work for DTRA before and during the Ebola crisis in West Africa and was awarded $3.1 million (2012-2015) for work in Sierra Leone[23] – one of the countries at the epicenter of the Ebola outbreak. Metabiota has also been embroiled in controversy for “bungling” America’s response to Ebola.

A July 17, 2014 report drafted by the Viral Hemorrhagic Fever Consortium, accused Metabiota Inc. of failing to abide by an existing agreement on how to report test results and for bypassing the Sierra Leonean scientists working there. The report also raised the possibility that Metabiota was culturing blood cells at the lab, something the report said was dangerous, as well as misdiagnosing healthy patients.[25] An email from Dr. Eric Bertherat of the WHO to colleagues about misdiagnoses and “total confusion” at the Sierra Leone government lab Metabiota shared with Tulane University in the city of Kenema. He said there was “no tracking of the samples” and “absolutely no control on what is being done.” “This is a situation that WHO can no longer endorse,” he wrote. All of those allegations were denied by Metabiota.