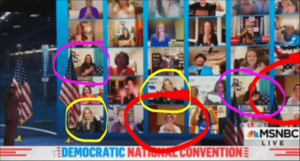 To give the appearance of viewer participation and a larger audience for Kamala Harris' 2020 vice presidential acceptance speech, the DNC doubled the images circled in red, purple, and yellow, who are all the same people. The party was expected to receive $50 million in taxpayer money from the federal government for convention security.[5]

The Clinton dominated Democratic National Committee showed how un-inclusive it is when it rejected out of hand 42 of 45 Sanders nominees for the 75 member convention rules, platform, and credentials committees. Of the 75 members on the 3 committees (25 each), 72 where staffed with Clinton cronies, and 3 with Sanders supporters, under the party's alleged "proportional allocation" methods based upon primary and caucus results.[6]

Despite being under investigation by the FBI for illegal mishandling of classified information during her term as Secretary of State, with the inclusion of Superdelegates Hillary led the field as the convention approached. The Clinton's have amassed $3 billion over 41 years from political donations. The majority of the money — $2 billion — has gone to the Clinton Foundation.[7] Her campaign has also accumulated $6.9 million from fossil fuel donations.[8] Through the Hillary Victory Fund, a joint fundraising committee, she funneled $60 million in donations through 33 Democrat state parties.[9]

Clinton promised to put her husband, former President Bill Clinton, "in charge" of fixing the economy;[10] according to the AFL-CIO and the Economic Policy Institute, Bill Clinton along with the Democrat-controlled Congress destroyed 700,000 jobs in America with the passage of the NAFTA agreement.[10]

Over 300 Sanders activists attended Democratic Socialists of America’s “Socialist Caucus” on Wednesday afternoon, July 27, 2016. In the audience were over 100 Sanders delegates, including most of DSA's 55 member-delegates; they were joined by Larry Sanders, Senator Sanders’ brother, and the Senator's son, Levi Sanders.

Maria Svart and Joseph Schwartz, DSA National Political Committee member and chief organizer of the caucus, briefly outlined the NPC's outlook on the election: building a stronger, multi-racial and anti-racist “post-Bernie trend” that can be in opposition to a neoliberal Hillary Rodham Clinton administration on day one. This can be accomplished, in part, by engaging in independent “Dump Trump” work in swing states (e.g., working for down-ballot progressives and engaging in voter registration and voter turnout among anti-Trump, progressive constituencies). In non-contested states, DSA locals can work for down-ballot progressive candidacies and build independent left electoral and social movement capacity.

Numerous participants remarked on social media that the caucus was one of the most substantive meetings at the convention. A score of participants joined DSA on the spot and the DSA table rapidly sold out of its 50 bright red DSA “Continuing the Political Revolution” T-shirts.

The Democrat's 2020 virtual convention was a total bust with the lowest ratings of any national political party nominating convention ever in history.[12] Donna Hylton, who was convicted for the kidnapping, rape, torture and murder of a 62-year-old Long Island real estate broker in 1986, whom she squeezed his testicles with pliers before murdering him, was a featured “Impactful Community Leader” speaker.[13] A ‘transgender non-binary gender-transcendent mermaid queen-king’[14] wanted Americans to imagine a world without police and prisons.[15] As Bill Clinton allegations by Jane Doe 15 in a lawsuit for damages against the estate of Jeffrey Epstein became public. The suit alleged that “Epstein conveyed to Jane Doe 15 how powerful he was and how helpful he could be in assisting Jane Doe 15 with her future goals, such as paying for college...He made a point of mentioning that he was close with Bill Clinton....Using this overwhelming power he had over Jane Doe 15, Epstein subjected her to a vicious, prolonged sexual assault.” News of Epstein’s name dropping came shortly after photographs surfaced depicting Clinton with another alleged sex abuse victim. The victim accused Epstein of raping her several times, told the Daily Mail that the photos were taken in September 2002 after Clinton fell asleep on the Lolita Express on an alleged "humanitarian" trip to Africa. Clinton was 56 at the time of the photos and victim was 22.[16] Documents unsealed in late July 2020 contain statements of Epstein accuser Virginia Giuffre, who told an attorney that the former president visited Epstein’s private island.