During a largely peaceful protest at the United States Capitol on January 6, 2021 organized by Trump supporters in opposition to certifying the "official results" of the 2020 U.S. presidential election, a small mob broke into the Capitol Building violently, forcing the people inside to evacuate. Despite the MSM blaming the breaking and entering on President Trump, falsely accusing him of "inciting" the situation, evidence has suggested the militant storming to have been the result of infiltration by Antifa and paid protesters.[2][3][4]

The same leftists who blatantly ignored, downplayed, and denied the seriousness of the 2020 Leftwing insurrection that resulted in the destruction of numerous inner cities have given extensive coverage to the attack at the Capitol, calling it an "insurrection".

In an interview with Washington D.C. police chief Steve Sund, Washington Post reported the chief “believes his efforts to secure the premises were undermined by a lack of concern from House and Senate security officials who answer directly to Speaker Nancy Pelosi and Senate leader Mitch McConnell.” WaPo reported, “Two days before Congress was set to formalize President-elect Joe Biden’s victory, U.S. Capitol Police Chief Steven Sund was growing increasingly worried about the size of the pro-Trump crowds expected to stream into Washington in protest. To be on the safe side, Sund asked House and Senate security officials for permission to request that the D.C. National Guard be placed on standby in case he needed quick backup. But, Sund said Sunday, they turned him down.” D.C. Mayor Muriel Bowser's chief of staff admitted, “this guy is on the phone, I mean, crying out for help. It’s burned in my memories.”[6]

In Congressional testimony about the incident, Sund said that a pre-January 6, 2021 intelligence assessment noted that Antifa would partake in the January 6 event in Washington.[7] 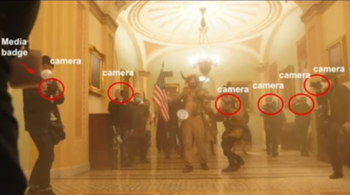 Antifa/BLM terrorist John Sullivan organized a BLM rally at 11 AM in Washington D.C. and tweeted about the existence of BLM buses[9] Sullivan was arrested for his actions in the Capitol that day, then released without charges once his Leftist political preferences were discovered.[10][11]

During the January 6, 2021 Joint Session of Congress certification process, as protesters rallied in support of President Trump outside the capitol, chartered vans of Antifa were escorted by state police in black, unmarked SUVs into the midst of the crowd.[12][13][14] Capitol Police then removed barriers and waved the crowd onto the Capitol steps.[15][16] Antifa rioters proceeded to wreak havoc[17] breaking windows on the U.S. Capitol building and storming the premises.[18][19][20][21] Police stood aside and allowed the Capitol breach while Patriot protesters begged the police to stop it and call for back up.[22] Patriots attempted to stop the provocatuers.[23][24] Capitol Police opened the doors and stood aside while inviting people inside.[25][26][27]

Facial recognition technology identified Antifa members,[28] who had used disguises to infiltrate a pro-Trump protest group,[29] as storming the building.[30] Twitter, in a flimsy attempt to cover for the Antifa punks, falsely claimed that a side-by-side photo comparison of one of the infiltrators (showing him at the Capitol in one photo, and at a BLM rally in June 2019 in the other photo, both of which show him with the same visually distinct tattoos) was "manipulated media" but gave no reason for their false claim.[31]

The proceedings inside the House and Senate chambers were halted and Babbitt, who entered the building with the crowd, allegedly was shot outside the Speakers Gallery.[32][33]

In an interview given the next day, John Sullivan responded to questioning:[34]

Among the deaths reported out of the incident include Ashli Babbitt, a veteran United States Air Force intelligence officer from California allegedly shot and killed by Capitol Police.[35]

The New York Times initially reported that U.S. Capitol Police Officer Brian Sicknick was “bludgeoned by a fire extinguisher.” The Democrat House Impeachment Trial Memorandum named President Trump liable for “insurrectionists” that “killed a Capitol police officer by striking him in the head with a fire extinguisher.” CNN later reported that there was no fire extinguisher at all. The pathologist who performed the autopsy claimed Sicknick did not die from blunt trauma force. Sicknick in fact texted his brother the evening after the riot to tell him he was fine and “in good shape.”[36]

The next day the Sicknick family began getting phone calls from reporters that Sicknick had been declared dead. However, as it turned out, Sicknick was not dead yet.[37] One hour later, as Sicknick’s family rushed to the hospital to see what they believed was Officer Sicknick fighting for his life, the US Capitol Police issued a further statement that Sicknick now was dead. Sicknick's brother had been told Brian collapsed inside the Capitol building, then was rushed to the hospital.[38] But the US Capitol Police’s statement told a different story: Brian had returned to his office at the police division first.

Sometime apparently between Sicknick being fine, healthy, and back in his office on Wednesday night, and dead or effectively dead on early Thursday evening, Sicknick apparently suffered a stroke. Sicknick’s body then was cremated.[39]