From Conservapedia
(Redirected from Anatoli Gorsky)
Jump to: navigation, search 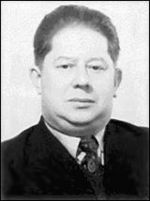 Anatoly Veniaminovich Gorsky, or Anatoli Borisovich Gromov as he was known in the United States, was born about 1907.

Gorsky joined the KGB in 1928 and worked in the internal political police. In 1936 he transferred to the foreign intelligence service and went to Great Britain as the assistant to the Rezident and cipher clerk. During the Great Purges of 1939 the London Rezidentura was liquidated, and in March 1940 Gorsky was recalled to Moscow. Gorsky survived the purges and was appointed London Rezident in November 1940. In London his first cover was attache, then second secretary of the Soviet embassy.

As London Rezident Gorsky took over managing eighteen agents, including the Cambridge Five, and the initial KGB penetration of the British atomic bomb project. The London Rezidentura consisted of only three people. By the end of the war there were twelve operational workers. In the heaviest period of war, from 1941 to 1942 the London Rezidentura was the basic information source of Soviet operations on Germany and countries of the anti-Hitler coalition. More than 10 thousand documentary materials along political, economic, military and other questions were sent from the London Rezidentura to Moscow.

In September 1941 the London Rezidentura obtained and sent to Moscow documentary materials on work in Great Britain and the USA on the creation of nuclear weapons and supplied a constant stream of information. During January 1944 Gorsky returned to Moscow after the completion of this mission and was assigned deputy division head.

In 1944 he was appointed as Rezident of foreign intelligence in the United States after the sudden recall of Vasily Zubilin. He remained in the United States up to 1946 continuing the work of obtaining information on the creation of atomic weapons. Gorsky returned to Moscow in 1947. In 1949 Gorsky authored the Gorsky memo, an internal KI document on failed American spy networks. In 1953 he shifted to do internal security work.